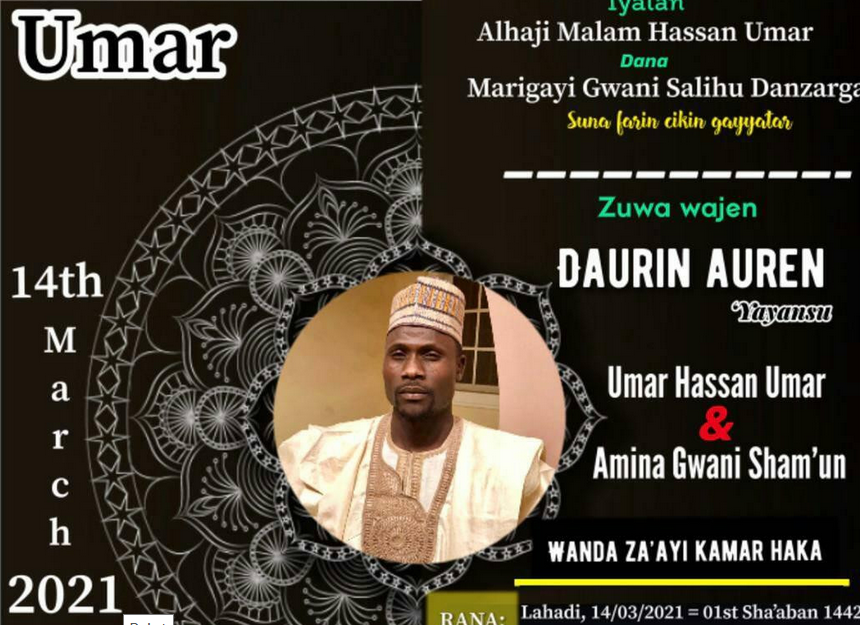 It was gathered that Amina, a resident of Koki quarters in Kano Municipal, was abducted on Friday, March 12, two days before her wedding slated for Sunday, March 14

The student of Federal College of Education, Kano, was last seen by her family members when she left her family house at Koki for school on Friday evening.

She later visited her friend in Dorayi Quarters, where she dropped her exams card. Family members feel she was kidnapped on her way back from Dorayi.

Amina’s uncle, Gwani Yahuza Gwani Danzarga, told Daily Trust that apart from two text messages earlier received from her telephone line, the family has not received any call from the girl or her abductors.

“Hours after she was declared missing, we received two different text messages, the first one was a threat not to call the girl’s number again and the second one was sent to her younger brother requesting to put her in their prayers as the other lady who was allegedly kidnapped together had been killed. We have not received any message again as her number is not going through. We are only praying to Allah Almighty to reveal anyone that has a hand in this kidnapping,” he said.

Meanwhile, the family also debunked the rumour making rounds that their daughter might have orchestrated the abduction because she was not interested in the marriage.

Hajiya Hajara Anas, an aunt of the abducted lady, told Daily Trust that the girl really loves her fiancé, as she was deeply involved in the wedding arrangements.

”She really loves her fiancé. Throughout last week, she was in my house for Gyaran Jikin (traditional body beatification). I took her to my neighbor who does Gyaran Jiki in Kofar Mazugal. You know a girl who doesn’t want the marriage or does not love the fiancé would not do it for marriage’s sake,” she added.

On his part, the fiancé of the victim, Umar Hassan, also dismissed the rumours that his fiancée went into hiding.

“I know the type of lady Amina is; a calm and obedient girl. She cannot do anything contrary to our religion. We love each other and both of us are eager to witness our wedding day,” he said.

Recalling his last moment with her, Hassan said he spoke with her few minutes before her abduction.

“I was driving when I called her but her line was not going through, and she later called me where we spoke on our wedding preparations, as the network was bad I promised to call her back as soon as I come back.

Bride-to-be allegedly kidnapped 48 hours to her wedding in Kano was last modified: March 16th, 2021 by Reporter