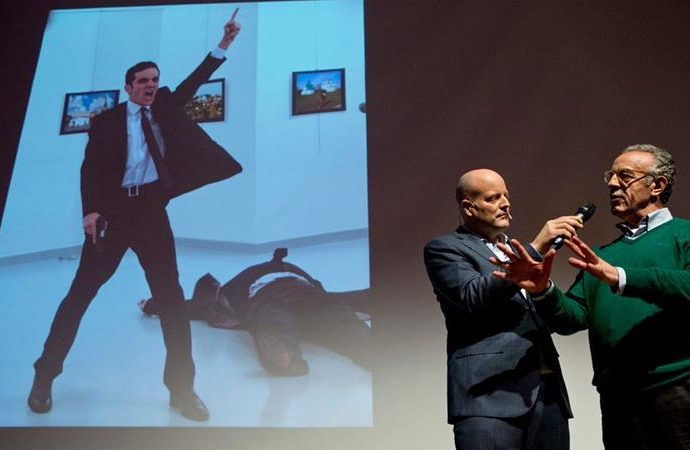 AP photographer Burhan Ozbilici has won the 2017 World Press Photo competition for his image of the assassin of Russia’s ambassador to Turkey.

In the photo Mevlut Mert Altintas shouted after shooting Andrei Karlov at an art gallery in Ankara, Turkey, on December 19, last year.

Ozbilici’s winning photo was part of a series titled “An Assassination in Turkey” which also won the Spot News – Stories category, which he captured in the moments before and after Altintas, an off-duty policeman, drew a handgun and shot Karlov at the photo exhibition.

“Don’t forget Aleppo. Don’t forget Syria!” the gunman shouted in Turkish, referring to the Syrian city where Russian bombardments have helped to drive rebels from areas they had occupied for years during the war. He also shouted “Allahu akbar” but I couldn’t understand the rest of what he said in Arabic.

Authorities would later confirm that Ambassador Andrey Karlov, 62, was dead. Altintas was killed after a 15-minute shootout.

The exhibition, titled “From Kaliningrad to Kamchatka, from the eyes of travellers” featured photos from Russia’s westernmost Baltic region to the Kamchatka Peninsula, in the east.

After the incident, Ozbilici said: “I decided to attend simply because it was on my way home from the office.”