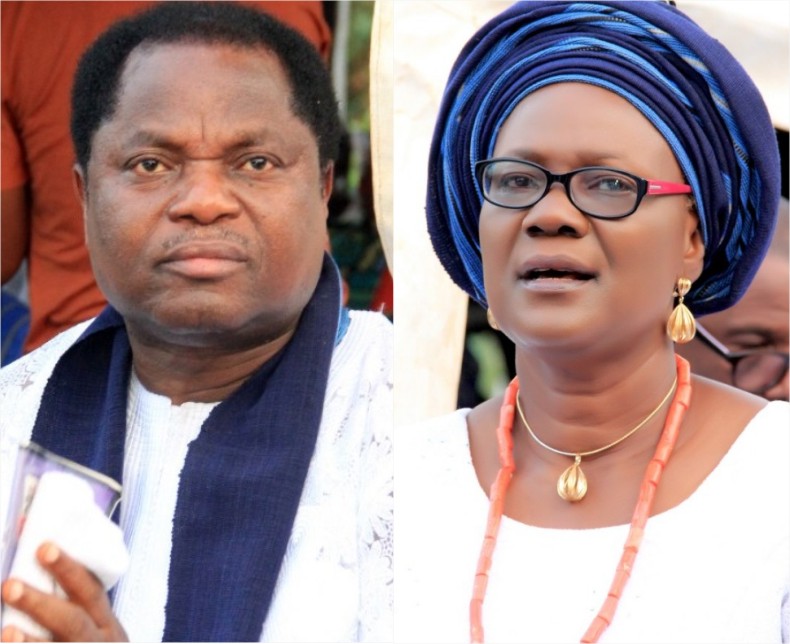 The Ile-Oluji town of Ondo State On Thursday and Friday, December 9 and 10 2021 came alive again as men and women of timber and calibre came from across Nigeria to celebrate the life of a matriarch, mother, grandmother and sister, Mama Victoria Mojibola Olubakinde who lived a glorious life and impacted her generation in many ways. You could tell from the quality of life she gave her children and how important they are in Ile-Oluji and Nigeria at large that Mama’s influence on them had shaped their lives and prepared them for the highly responsible roles they now play in their different walks of life.

As a matter of fact, all the hotels in Ile Oluji had been fully booked by the time City People arrived in the town on Thursday; that was the kind of effect Mama’s burial pulled. Everyone in the town knew that someone very important was going to be buried. Mama’s house practically became a tourist centre for both young and old as well as visitors to Ile Oluji as they came to have a glimpse of how important Mama could have been to have attracted such a crowd.

City People’s Brands Editor, DAMILARE SALAMI 08155134152 alongside Photojournalist, Abdulrasheed Sanni were at the event and here are some of the interesting gists from the 2-day event, enjoy.

Mama was trained the hard way from childhood and this perhaps made life easy for her children as she spent the latter part of her life in massive love, care and attention from her husband (before his death) and her beloved children. This was because her father, Pa Samuel Bolarinwa Olasegha passed away while Mama was only 10 years. And she with her siblings were left in the care of their aunt, the late Madam Eunice Olatujo Adewole.

Mama trained as a tailor while she was in Lagos. It was in Lagos she found her soul mate, Samuel Olorunsola Olubakinde who was then a young Sanitary Inspector in Lagos and an indigene of Ile-Oluji. Mama and her husband relocated to Badagry after marriage and later worked in Ikorodu, Agege in Lagos as well as Ibadan before the family returned to Ondo State in 1984 after the old Western State was split into three.  In the whole of this sojourn, Mama was highly industrious, consistent, dedicated and committed to general merchandise. She engaged in different types of trades ranging from the sales of building materials to textiles, shoes, foods and drinks and many others.

Mama Victoria Mojibola Olubakinde and her late husband, Chief Samuel Olorunsola Olubakinde lived peacefully in their Ile-Oluji country home after retirement. They had their marriage blessing celebration in the year 2002, after 50 years at the St Peter’s Anglican Church Ile-Oluji, now the Cathedral of St Peters, Ile-Oluji.

The highly celebrated lover of God and service in his vineyard transited peacefully unto glory on Sunday, October 3, 2021, and was survived by God-fearing children, grandchildren, great-grandchildren, step-sisters, sons and daughters-in-law, nephews and nieces.

The event started with a glorious lying-in-state as Mama’s remains was placed in a beautifully decorated open room for everyone to see. Men and women came from all over to wave her remains goodbye while so many people kept talking about their cherished moments with Mama Victoria, a woman with a heart of gold.

At exactly 5:00 pm, the ministers had arrived from the Cathedral of Saint Peter of the Church of Nigeria, Anglican Communion, Ile-Oluji. People listening to the sound from afar would have thought that it was an open-air-crusade because of the powerful prayer points that were coming from the altar and the combined anointing of ministers of God present at the event. To say that there was an overflowing grace of God would be the most appropriate description of Mama Olubakinde’s wake service. The funeral service and thanksgiving were also anchored by the ministers of God in Mama’s church, the Cathedral of Saint Peter’s Anglican Church, Ile Oluji.

The Dokumasun Was Special Too

It is a common tradition in Ondo Town for the children, family and friends of the deceased to watch over the remains on the eve of its burial. This practice is very ancient but it is a way of celebrating the departed for the last time. This was done for Mama in a special way. Pastor Wole and his friends were present as well as other children of their spouses too. It was a night of melodious singing and dancing, a night of fun and celebration and there was plenty of food and drinks for those in attendance.

Trust the Anglican Church choir for a good delivery of classical, hymns and even contemporary music. At Mama’s funeral service and thanksgiving that held inside the church auditorium, the choir did so well from the praise worship segment down to the hymns and benediction. As a matter of fact, during the thanksgiving service after the family’s arrival from the cemetery, the church atmosphere completely changed as the choir thronged into serious praise songs. Everyone present in the auditorium danced to the glory of God. By and large, the choir made everyone smile.

The roll call of Pastors from Lagos was unlimited. Spotted at the event was Pastor Femi Faseru of KICC, Apostle Dele Johnson, an expert on dream interpretation and the Founder and General Overseer of Jesus Liberation Ministries. Also at the Christian wake was Pastor Ezekiel Adeleke Atayero, founder of The Cross Christian Centre Ojodu Berger, Lagos, Pastor Bisi Adewale, a family and relationship expert, the CEO of Family Boosters and; author of Secret of Irresistible Wife and more than 70 other books on marriage and family life, Pastor Moses Afolayan of The Latter Glory Place Outreach, Pastor John Agbonifo, Chairman and D/S CAC Ifako Ijaye Zone, Lagos.

The G.B Gold Funeral Homes are one of the most sought after in Ondo State and they took care of all the funeral activities of the late Madam Victoria Mojibola Olubakinde. Their undertakers were professionals and their performances were error-free. They gave Mama’s remains all the required final treat such that the onlookers agreed that such a treat can only be received at a state burial.

Despite the fact that Mama died at the ripe age of 89, Mama Victoria it was still very difficult for her children to let go. It was a really emotional moment for all of them, especially the men who wept profusely as they paid their last respect by returning the dust to dust and ashes to ashes.

Still at the cemetery, one of the most emotional moments was when Pastor Wole Oladiyun was caught on camera consoling his darling wife after she paid her last respect to the remains of her late mum before it was committed to mother earth. Pastor Dosunmu and Pastor Akinola were also playing the same role for their dear wives.

EVERYTHING BLUE AND A TOUCH OF RED

Mama’s children were all beautifully dressed on both days. At the Christian wake, they all stood out in their white attires and navy blue gele/cap. And on the deal day, It was a well designed Aso-Ofi Dansiki and Sokoto while the women stunned in sky blue lace combined with the designed Aso-Ofi for men.

THE RECEPTION WAS LIT

Would there be a complete owambe party without a reception party? Certainly not, I suppose. Mama’s burial reception party would remain one of the most talked-about in Ile Oluji for a very long time. There were so many unique activities at the party that gave many of the guests unforgettable memories. The food, drinks, serenity of the venue, the comfort and everything in-between was nothing but perfect.

Not many would believe the turnout at the event as well as the number of those that wore the Ankara ASO-EBI. The Aso-Ebi were two distinct designs, one was a touch of brown and blue while the other had a touch of red. In all, the guests looked so beautiful in the ASO-EBI. There were different shades and styles of the Aso-Ebi which made those who wore them look so special.

CLAM SIGNATURE ALL OVER ILE-OLUJI

One thing that cannot be denied at the event and all over the Ile Oluji town is the influence of Christ LivingSpring Apostolic Ministries (CLAM) a church set up and founded by Senior Pastor Olawole Oladiyun and his beautiful wife, Pastor Mrs Bukola Oladiyun, a daughter of the deceased. During the funeral service, the presiding Bishop had appreciated Pastor Oladiyun and the entire CLAM family for their hands of support and fellowship towards the church of God across all denominations in Ile Oluji. That aside, there were several other signs that CLAM has had a positive impact on the lives of the people of Ile Oluji and Ondo town in general.

Call him a fast-rising star and you will not be wrong, but beyond being a fast-rising compere, MC Akinyemi Asorogbeye is your ideal compere. He is a perfect blend of the old school and generation Z. His ability to capture all the age-grades among his audience was unbelievable. He is absolutely impeccable on the job. He ran the show and did well with the band boys who backed him up each time he threw a song-related joke at the audience.

MOG ON THE BANDSTAND

The band boys were exceptional. They did pretty well and deserved all the accolades. Privileged information revealed to City People that the band leader, MOG and his boys are members of the Christ LivingSpring Apostolic Ministries, CLAM. This was just to prove the point that there is excellence in their DNA. They did well, sang the most appropriate songs at every required stage. Was there value for his effort, definitely yes. He was not sprayed like other regular owambe singers but he had a big bag in his front where those who came to sing were dropping money and believe me, he made so much because the bag was continuously filled and refilled.

Of course, it was required for all the deceased children to celebrate their late mum on the dance floor and they are required to do this with their guests, loved ones and most importantly their spouses. On the dance floor, Pastor Wole was joined by his covenant partner, Apostle Dele Johnson, Pastor John Agbonifo, Pastor Moses Afolayan and a few other ministers of God, CLAM members and other very close family members.