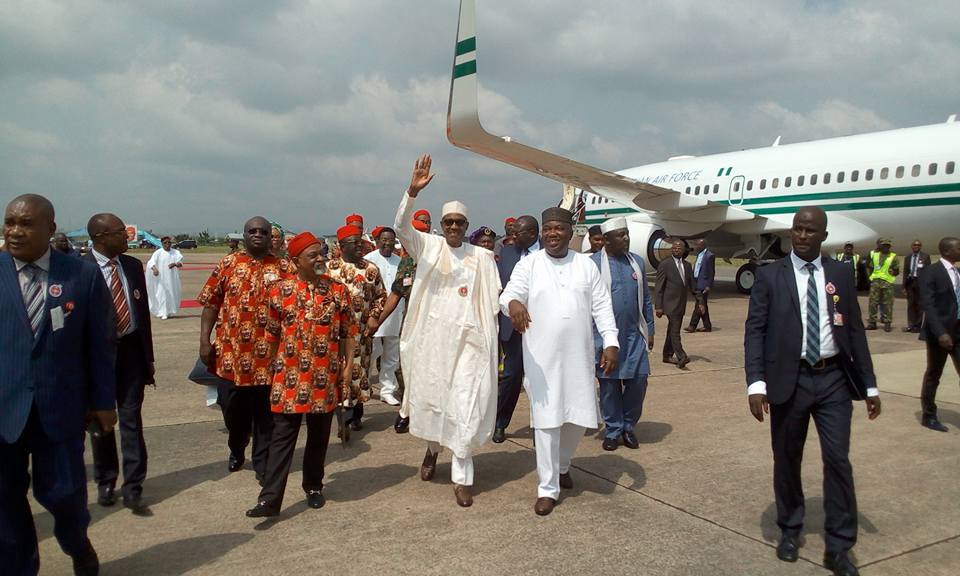 Confusion rocked the Presidential lodge Abakaliki, the Ebonyi State capital as different factions of the state chapter of the All Progressives Congress, APC, struggle to have an audience with President Muhammadu Buhari.

President Buhari is in the state for a two-day working visit and the State Governor, Dave Umahi had warned all political parties not to engage in any form of rally or come to the PA Ngele Oruta Township stadium where the President addressed the people with party logo to avoid any act of embarrassment to the President.

Governor Umahi had explained that Buhari was on a state visit and not for any political activity.

Although the directive was obeyed, President Buhari agreed to meet with his party members despite the fact that Ebonyi is a Peoples Democratic Party, PDP, state.

Incidentally, two factions of the party one led by the Minister of Science and Technology, Chief Ogbonnaya Onu and the immediate past governor of the State, Chief Martin Elechi and another one led by Senator Ali Ucha and Chinedu Ogah, a former special adviser to former Governor Elechi.

However, the Minister’s faction appeared to have had an upper hand as they were called in to meet the President, while the other faction was seen compiling lists of its members perhaps for security clearance if eventually they get opportunity to have audience with Buhari.

As at press time, it was not clear whether President Buhari will meet with the other faction and whether he will be able to reconcile the factions.