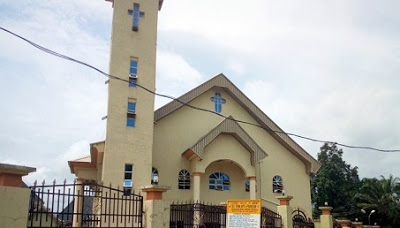 Hundreds of worshipers who stormed Ajegunle Baptist Church, Agbowo Ibadan on Sunday to usher in a new month and pray for divine protection met a locked gate to the premises of their Church engendered by the crisis that has been rocking the church in the last two years

A large number of the faithful who had arrived the Church for the first service in the month, could not gain access to the church as the premises was under lock and key.Security operatives, as well as police detectives, kept surveillance in order to avert any breach of Peace.

Security operatives, as well as police detectives, were present to prevent any breach of peace.

Worshippers who had arrived the church premises in their large numbers as early as 7.30 could only stand before the main gate of the church to sing songs of praise when it was dawned on them that no service would hold inside the church auditorium.

One of the Elders who spoke with our Correspondent on condition of anonymity said ‘there is an issue between the Concerned Elders of the Church and the Assembly Pastor,Rev.E.O.Oyekan who is expected to have left the church over serious allegations.

He presented a pamphlet entitled, “financial misapplication without embezzlement'” a case study of Ajegunle Baptist Church, Agbowo Ibadan crisis'”, which he disclosed; had been sent to the ,Baptist convention, the highest ruling body of the church.

The brochure was written by four concerned members of the Church namely Mr.G.A.Odekunle, Dn.T.A.Ojo,Mr.AM.Okunade ,Mr.T.T.A.Adewuyi and copied the President Ibadan Baptist Conference ,the Moderator, Champion

They accused Rev. Oyekan of many wrong doings bordering on misappropriation of church fund, adding that the only way to resolve the conflict was for the church pastor to leave. “The Church for manry years now has lost her position of honour in the Baptist family through untimely and inappropriate payment of dues to the Association , conference and convention”, they allege.

The Concerned members further contended that as any community, where both the right and wrong would have their followership,”Rev.E.A.Oyekan’s action had caused serious disunity among Ajegunle Baptist Church members.

In his defence, Rev.Oyekan referred any interested person to  Baptist Convention for any clarification. His position was contained in his letters addressed to the President of the Convention.

It was learnt that the Men’s Missionary Union of the Church which has also joined the protest against the church pastor, insisted that the only way out of the crisis was for the pastor to quit.

Elders of the Church, it was learnt, were taking steps to resolve the crisis as the conflict has become a shame to the Baptist family in the area.