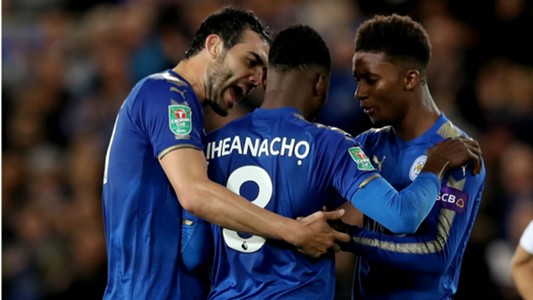 Despite having an impressive form in front of goal during pre-season – with four goals in three games – Iheanacho had failed to continue his blistering run, failing to score in the Foxes’ opening three games of the season.

Meanwhile, former Monaco winger Ghezzal has yet to begin dazzling in England.

But the Nigeria striker and the Algeria winger opened their account this season against the Cod Army, with the latter netting a spectacular effort.

Claude Puel’s men started on a bright note with Christian Fuchs long-range volley handing them a lead in the eighth minute.

Before the interval, Vincente Iborra added a second with a firm header and, both sides had yet to settle into the second half when Iheanacho latched onto a perfectly weighed Marcus Albrighton clearance to grab his side’s third.

Ghezzal rounded off the comprehensive victory with a lovely strike from outside the area, after a nice combination play with Iborra, in the 71st minute.

Iheanacho, who netted his third goal in two games against the League One outfit, played for 50 minutes while Fousseni Diabate replaced the former Lyon winger six minutes after scoring.

Next up for Leicester is Saturday’s Premier League clash against table-toppers Liverpool, and both players will hope to replicate their showing against Jurgen Klopp’s men.