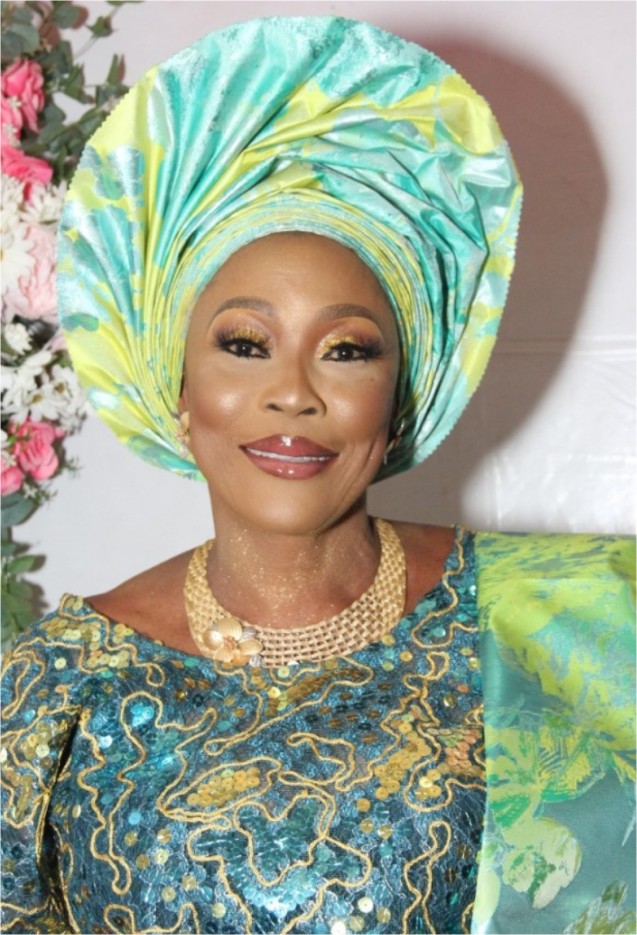 On Saturday 19th March 2022, the Ballroom of the prestigious Oriental Hotel, in Victoria Island, Lagos, came alive as a grand 60th birthday took place there. It was the birthday of  High-Chief Mrs Mojisola Teniola, the beautiful wife of veteran Journalist and former top shot at the Presidency, Chief Eric Teniola. While the husband is the Akogun of Idanre, the wife is the Yeye Akogun of Akogun of Idanre, in Ondo State. The hall was beautifully decorated by Bar. Filani Alexlarry Yewande, the CEO of Lexicon Event Services and her crew. The entrance of the hall was decorated with beautiful backdrops carrying the pictures of Chief Mrs Mojisola Teniola, adorned with pink and gold balloons and petals. The entrance also had a beautiful life-size Instagram photo profile standing for photo sessions.

The ballroom had a blissful view over the lagoon, as the windows were covered with golden drapes. The ballroom was also filled with Crystal Dior chairs and banquet tables.

The stage was another exciting sight to behold which had a backdrop with pictures of the celebrant and a 3 layer cake standing on a high stool.

The event started with the arrival of guests with stunning looking celebrity women, dressed in purple lace and the men turned out in white buba and sokoto, with purple gele to match. As guests began to flood the ballroom, Jide Ogbola and his band members began to sing beautiful songs. Mc Jimmy Jairo at intervals took time to thrill guests with jokes, as they waited for the celebrant’s arrival.

As guests trooped in, Mc Jimmy Jairo began to acknowledge the entrance of important guests in the room.

After a few moments on the dance floor, they took their seats in the front row of the ballroom. MC Jimmy Jairo then called on a few friends and family members to say a few things about the celebrant. Everyone could not but point out her significant role as a patient wife to Chief Teniola and a loving woman to her family and her husband’s family too.

After this, the celebrant took the time to greet her guests before going upstage to cut her beautiful cake. After this, a photo session was held before the stage was left open for the celebrant to dance. After a few fun moments on the dance floor, Chris Mrs Mojisola Teniola again went round to greet guests, before returning to the dance floor to dance with family and friends.

It was a beautiful party as everyone had enough to eat and drink.

How To Identify Typical Party Rockers @...