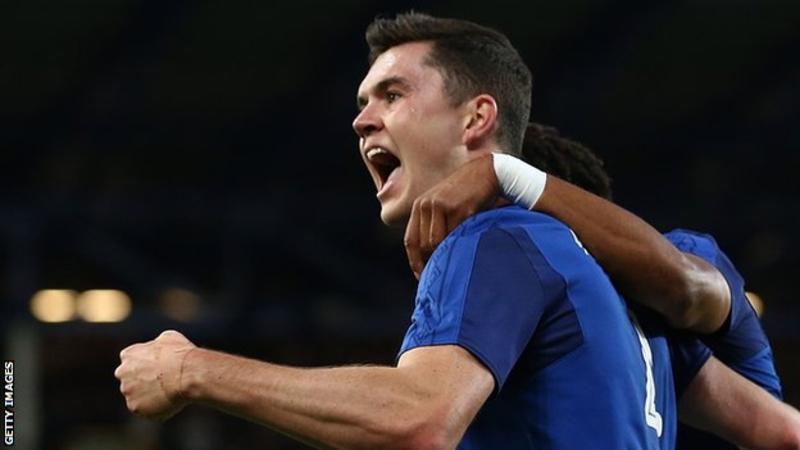 Everton now look to be in a strong position to reach the Europa League group stage with a first-leg win over Hajduk despite the fact that the game was marred by crowd trouble.
Hajduk fans burst towards the Goodison Park pitch and threw objects as play was stopped in the 33rd minute.
Moments earlier, Michael Keane had risen highest at the far post to head in Leighton Baines’ left-wing cross to give the Toffees a lead.
Idrissa Gueye slotted in when play resumed after a five-minute delay, giving the Toffees a healthy lead.
Uefa will now look into the crowd trouble, before the second leg in Croatia next Thursday, where a win, draw or single-goal defeat would be enough to guarantee Ronald Koeman’s side a place in the Europa League group stage.
Commenting on the stoppage, Koeman said: “I was disappointed. I like to have it really fair, that you can play football, and we needed to stop. I don’t know what happened, it was in the corner.”
Hajduk, who finished third in the Croatian top-flight last season, pressed more in the second half as the Premier League side held on to a vital clean sheet.
Everton’s new £30m keeper Jordan Pickford produced three fine saves – including a smart save low to his left from Franck Ohandza – to stop the visitors netting a potentially crucial away goal.
“I was really happy with the first half and unhappy about the second. We lost a big opportunity to score more goals.
“In my opinion we lost a big opportunity to score more goals in the second half because we dropped the tempo.
“We gave them the belief to dominate the game. Still we were dangerous but not like we were in the first half.
“We knew we would get a lot of space on the sides and I thought we did well in the first half. We spoke at half-time about wanting to play and go for more goals but instead we dropped the tempo.
“It is always good to have a clean sheet in the first leg at home. Two-nil is a good result but you always like to reach the maximum – today the maximum was more goals,” he concluded.

Another Late-Season Rollercoaster for Ndidi, Iheanacho and...