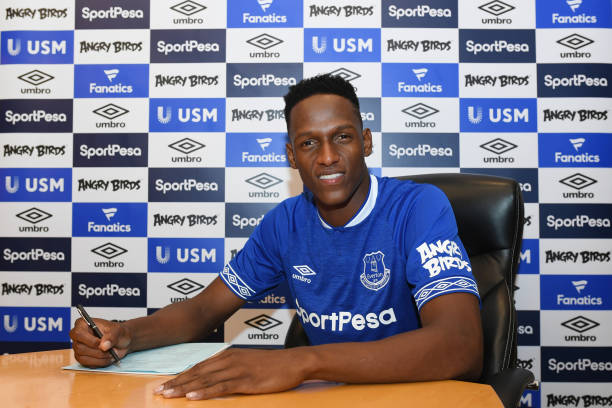 The Toffees have also signed Brazilian winger Bernard on a permanent deal.

Barcelona said they reserve the right to buy Mina back, while midfielder Gomes, 25, has cost a £2m loan fee.

“It’s important the club want to fight for something. This is a great opportunity for me,” said Mina.

Mina’s arrival means Everton have spent more than £60m in the past two weeks following the initial £35m arrival of Brazilian winger Richarlison from Watford, a deal that could rise to £50m.

“He has good knowledge of the position he plays and he is good on the ball as well,” added Silva. “He will contribute in the build-up play and will also be very strong at defensive and offensive set-pieces.”

Mina scored half of Colombia’s six goals at the World Cup in Russia as they reached the last-16 before losing to England.

He only joined Barcelona in January for £10.44m from Brazilian side Palmeiras, and played six league and cup games as Barca were crowned 2017-18 La Liga champions.

Gomes was part of the Portugal squad that won Euro 2016. He has spent two years at Barcelona making 46 league appearances.

He said Everton’s Portuguese boss was a big factor behind his arrival.

“Everybody in Portugal knows how Marco Silva works and his abilities as a coach,” added Gomes.

“For me, it was really good to speak to him because I know how good he is and I feel motivated to work with him and to play for Everton, a great club.”

Bernard was out of contract after leaving Ukrainian club Shakhtar Donetsk in June.

He has played 14 times for Brazil, scoring once, with his last international appearance coming at the 2014 World Cup.

“I chose Everton because of all the things I had heard about Marco Silva and after speaking to him I was happy with what he said to me,” said Bernard.

Fear: Lagosians Refuse Taking Man Who Collapsed At Oshodi Out Of The Road