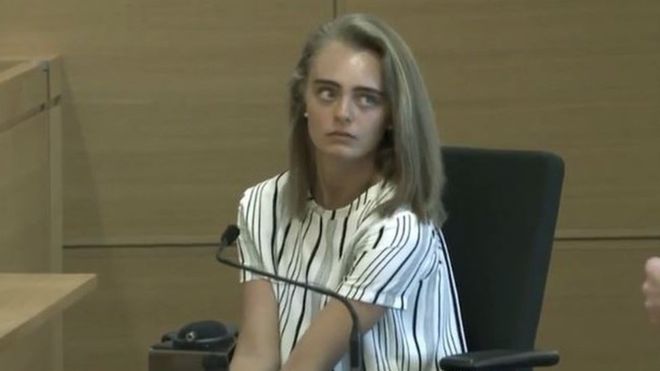 A woman who convinced her boyfriend to kill himself has been arrested and charged to cut for involuntary manslaughter.

A 20-year-old US woman, whose boyfriend took his own life nearly three years ago, has gone on trial for allegedly urging him to kill himself. Michelle Carter is charged with involuntary manslaughter for her role in the suicide of Conrad Roy III.
Prosecutors allege Ms Carter drove the Massachusetts 18-year-old to his death to attract sympathy. She has asked a judge to rule on the case, rather than a jury of her peers.
“You need to do it, Conrad,” Ms Carter texted him on the morning of 12 July, according to records presented by the Bristol County District Attorney’s Office.
“You’re ready and prepared. All you have to do is turn the generator on and you will be free and happy,” she wrote.
She told him in another message: “You’re finally going to be happy in heaven. No more pain. It’s okay to be scared and it’s normal. I mean, you’re about to die.”
As he expressed doubts, she kept pushing.
“I thought you wanted to do this. The time is right and you’re ready … just do it babe,” she said.
“No more pushing it off. No more waiting,” she went on.
Mr Roy was found dead from carbon monoxide poisoning in his vehicle at a Kmart car park in Fairhavens, Massachusetts, on 13 July 2014.
Texts show he wavered in his plan to follow through with the suicide, at one point getting out of his pick-up truck.
The court heard that Ms Carter, who was then 17, replied: “Get the f*** back in the car.”
After his death, she fundraised for mental health awareness and led a charity softball event in his honour.
Mr Roy’s mother, Lynn Roy, told the court on Tuesday she had no warning of her son’s suicide.
She said: “I thought he was a little depressed.”
On the day of his death, Mr Roy went to the seaside in Westport, Massachusetts, with his mother and sisters, according to prosecutors.
He bought his sisters ice cream, joked about bathing suits and spoke of a scholarship he had just won, while making other plans for the future.
Ms Carter sent texts to Mrs Roy after her son’s death, telling her that his spirit lived on.
One text read: “I loved him, Lynn. I know I’m young, but I saw the rest of my life with him.”
Culled from the BBC
How Evil Woman Convinced Her Boyfriend Through Text-message to Commit Suicide was last modified: June 7th, 2017 by Arinze Ago

This Is Serious! Drama as Angry Landlord Confiscates Tenant’s Pot of Chicken Soup