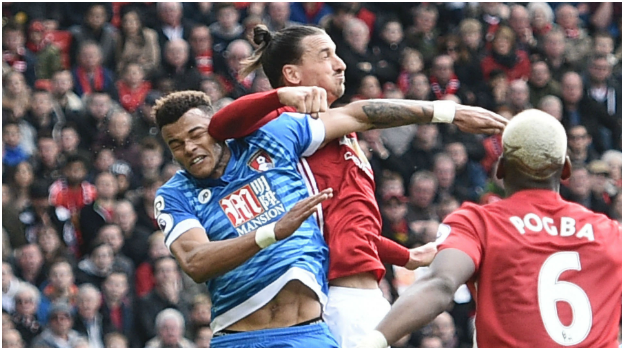 The Football Association (FA) have charged Zlatan Ibrahimovic and Tyrone Mings with alleged violent conduct by after their clashes during Manchester United’s 1-1 draw with Bournemouth on Saturday.

Both players tussled more than once during the Premier League match at Old Trafford and were lucky not to be sent-off in the first half.

After Marcos Rojo saw his goal cancelled out by a Joshua King penalty, the game became even more heated as it approached half-time.

Most notably, while Ibrahimovic was lying on the ground after a challenge, Mings stood on his head, though he insisted after the game that he did not mean to.

The United forward responded shortly afterward when the two battled in the air for a cross, with the Swede elbowing Mings in the head.

“I jump, I protect myself, I jump very high, he jumps into me. I think he jumps backward and I jump straight up and unfortunately he jumps into my elbow,” was Ibrahimovic’s explanation to MUTV. Meanwhile, Mings admitted he was not sure if his counterpart intended to hurt him.

In another related event in the game, Ibrahimovic threw Mings to the ground after they grappled for a while off the ball.

Both players escaped punishment from referee Kevin Friend, with Andrew Surman the only one to be sent off in the game, but the FA has responded by retrospectively charging them with violent conduct.

“Zlatan Ibrahimovic and Tyrone Mings have both been charged with alleged violent conduct following the Manchester United versus AFC Bournemouth game on Saturday [4 March 2017],” a statement on the FA’s website read.

“The players were involved in two separate incidents in or around the 44th minute which were not seen by the match officials at the time but caught on video.

“Furthermore, The FA has submitted a claim that the standard punishment that would otherwise apply for the misconduct committed by the Bournemouth defender is ‘clearly insufficient’.

“Both players have until 6pm on Tuesday 7 March 2017 to reply to their charge.”

Ibrahimovic has already said he will “respect every decision” when it comes to his punishment, but it comes as a big blow to the team, as they could be without the striker for the FA Cup quarter-final against Chelsea as well as the games against Middlesbrough and West Brom in the league.

Champions League Is A Must For Chelsea “Every Year” – Antonio Conte