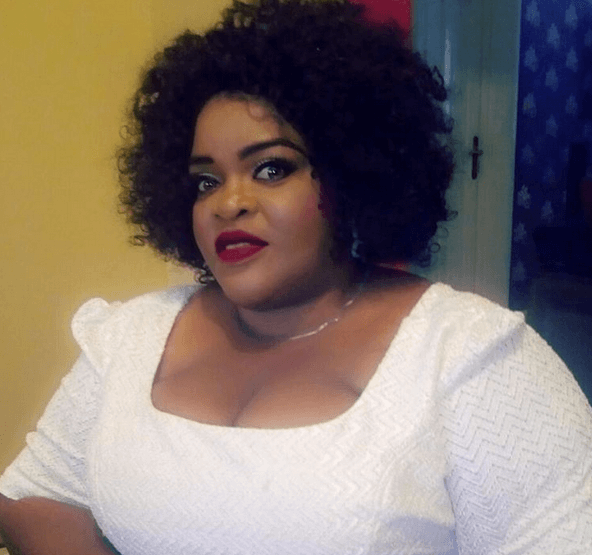 Allwell Ademola is a renowned Actress, Filmmaker, Movie director, Scriptwriter and Musician who is more popular for her roles in yoruba movies.

In an Interview with Vanguard, the busty actress talked about her career and her marital status.

You started with English movies but have moved to the Yoruba sector, why?

I am a proud Yoruba woman and can say that was the first reason. Uncle Jide Kosoko was part of those who brought me to the Yoruba industry. Any time we met on any English set, he would always advise me to come “home” but I knew I couldn’t speak Yoruba fluently and would not want be on a set where people will be making jest of me. Some would even think I am trying to show off. Later, I decided to work on myself. My first attempt was not funny. I remembered Madam Saje laughing at me.

Again, one of the reasons it was easier for me to move from English to the Yoruba sector was because I really didn’t want to use the word tribalism but that is the truth. The Yorubas at one time were doing well in the English sector of Nollywood. Talking about the likes of Jola Fani-Kayode,Wole Amele, Joke Silva, Olu Jacobs, Akin Lewis, Olumide Bakare and the rest of them. But all of a sudden, the Igbos pumped money into the industry (been business people) and took over. So, it wasn’t easy for us the Yorubas to shine again as we were sidelined.

You were on dreads for about five years but had to remove it because of a role in your movie, will you have done that for another person’s production?

The producer will have to pay me handsomely I must confess.

Please talk about the movie and its connection to your hair?

The movie is titled “Omo Afe Mi” where my character lost the man she loved dearly to a mysterious death. And out of curiosity and pain, she took off the most prized possession (her hair) to curse whoever was behind the death of her lover.

Have you been embarrassed at any time because of your size?

That has happened a lot of times but I don’t allow it get to me. There was a day I was taking coffee in my Pastor’s office and a lady stepped in. The lady in question didn’t know what I had in the cup , so she felt it was chocolate and started educating me on what is best for me to eat. However, I was angry and asked her what made her think I don’t like what I look like. I even went as far as telling her I don’t wish to be like her because she was skinny. At the end of the day, she was the one who left my pastor’s office embarrassed. My father once taught me that nobody can make you inferior without your consent. Another one happened at an eatery. I was telling the attendant what I wanted which was fried plantain, salad and moimoi. The man next to me screamed, saying I don’t need fried plantain in the presence of many. I was furious and gave him what he deserved for embarrassing me.
If there is anything you love to change about yourself, what will that be?

Why is Allwell not married?

I would have been married some years back, I lost my man two months to our wedding. He was shot by armed robbers and I mourned him for two years. After then, I went into another relationship with my best friend who was supposed to be our best man. (He was my friend and he later became my man’s friend.) I later realised I didn’t know him well enough after we dated for eight months. That was another heart break. Having suffered two heartbreaks , I decided to take it easy and fell in love with my job. For now, I am fine without a man.

So how do you manage sex since you are not in a relationship?

Sex for me has to do with my mind. If I was in a relationship, I could be very active sexually but since I am not in a relationship, what could bring the thought of sex into my mind? Even when I was in a relationship, I forget about sex when I am very busy. However, because I am human and the urge comes, what I do is call some friends and we hang out together. Thank God, there is also sex toy. Sex toy will not break one’s heart or impregnate one. But that doesn’t mean that I use sex toy, I am telling you the options available.

‘My Fiance Died 2 Months To Our Wedding And I Moved On With His Bestman’ – Actress Allwell Ademola was last modified: March 2nd, 2017 by Daniji Emmanuel

Revealed: How Acting President Osinbajo Fought Corruption As The Attorney General Of Lagos