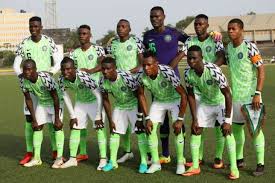 The Flying Eagles qualification for this year’s Under-20 FIFA World Cup in Poland will have to wait after they were frustrated by a disciplined defensive performance by South Africa.

The 0-0 draw has kept South Africa alive in the tournament as they now have a final group game against Burundi.

The Flying Eagles final group game will be against the host nation Niger.

Nigeria still leads Group A with four points, while South Africa are second on two points after a 1-1 draw with the tournament hosts at the weekend.

The Flying Eagles had 66% of the ball possession and 13 shots on target but they found the defence as well as goalkeeper and skipper Kubeka unbeatable.

It was a story of wave after wave of Nigerian attack against South Africa’s resolute defence.

In the dying minutes, a pile driver by midfielder Jamil Mohammed from the edge of the box was saved by Kubeka.

Meanwhile, Flying Eagles have been paid $1,500 for the 2-0 win over Burundi in their opening Group A clash last weekend.

The Nigeria Football Federation (NFF) had earlier announced they will not pay match bonuses to the age-group national teams including the Flying Eagles.

After yesterday’s draw with South Africa, the Flying Eagles will qualify for the FIFA U20 World Cup in Poland if they beat host Niger or at worse, pull a draw depending on the result from the other match of the group

Lagos transport problems will be solved with Inter-modal Transportation – Hamzat