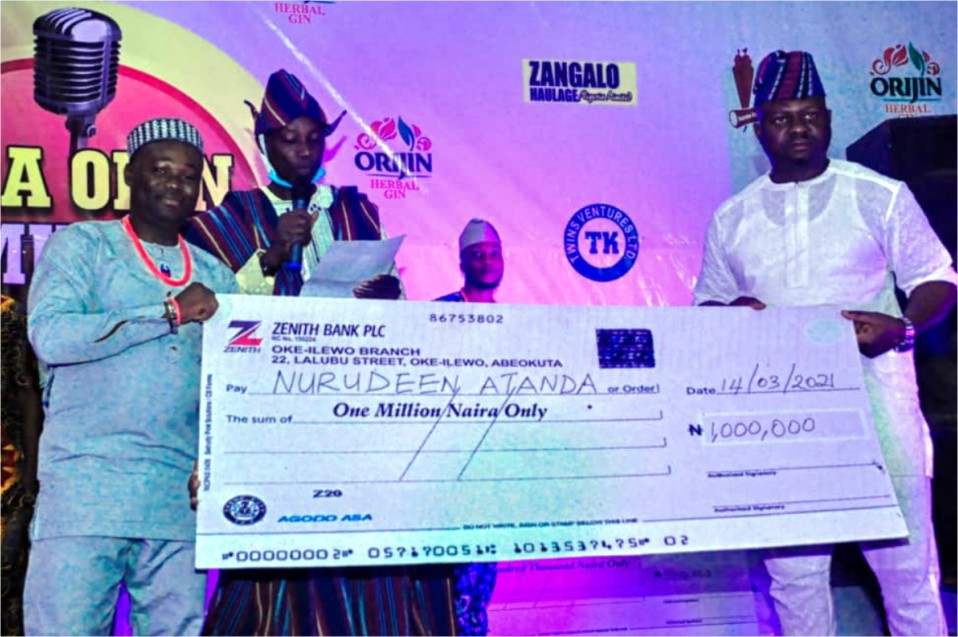 Winner has eventually emerged in the talent hunt in Fuji music organised by a television content producing company, Agodo Asa. The competition tagged: “ Oba Orin Music Challenge” which had Fuji music star, Saheed Okunola simply known as Saheed Osupa as its Project Ambassador, had its grand finale where a contestant from Lagos, David Adisa Abiola with the stage name, C-Caution, emerged winner, on Sunday, 14th March 2021.

Sponsored by Origin Herbal Gin and Apex Fabrics amidst other minor supporters, the grand finale took place at D’Olive Event Centre, Oke-Mosan, Abeokuta, Ogun State, with popular broadcaster and real estate top player, Ayobami Adelani, better known as Oba Pedepede anchoring the event. And the event started with some invited artistes including some of the contestants that participated in the talent hunt but did not make it to the grand finale, taking the stage to entertain the audience. Those who performed were: Ejire Eniayenfe, Prince Sakiru Adisa Adekunle (Bonanza), Waliu Amobi Adekunle, Olabisi Exclusive, Olaleke Iyanda (Olubori 1), Oriade Calypso, Orinlabi and Bolomope Landoma.

With the Panel of Judges made up of Mr Felix Ige Ogunmola (H.O.D. Music Department, Federal College Of Education, Abeokuta), Mr Olukayode Banjo (Federal Radio Corporation of Nigeria, Ibadan) and Mrs Abiodun Somorin (Notable Fuji Music lover),  already taking their seats, the main event began in earnest as the names of the contestants in the grand finale and the states they represented were announced by the anchorman, and that included: David Adisa Abiola (C-CAUTION) from Lagos, Suraju Nurudeen Atanda (Antenna) from Ondo, Idowu Seun Ayinde (Kaabah) from Ogun, Bukola Afolabi (Bukola Omo Daddy) from Ekiti, Dauda Adam Alani (Alani Orin) from Osun, and Adeyemi Emmanuel Olusanya (Gbadebo Ajani Elevator) from Oyo. The contestants had two rounds of showcasing their talents to the audience through which they would be adjudged by the Judges. And the first round had them doing freestyle, while the second round had them singing about the topic of love. And after the two rounds, David Adisa Abiola (C-Caution) from Lagos State was adjudged the best of the lot as he came first, and Nurudeen Atanda (Antenna) from Ondo State became the 1st runner up, and Idowu Seun Ayinde (Kaaba) from Ogun State, came out as the 2nd runner up.

And consequently, the 2nd runner up was presented with a dummy check of #500,000.00 (Five Hundred Thousand Naira), the first runner up was was presented with a dummy check of #1,000,000.00 (One Million Naira) and the winner was handed a branded car key as promised by the initiator of the project and Chief Executive Officer (CEO) of Agodo Asa, Mr. Olusegun Lasile at the beginning of the talent hunt project.