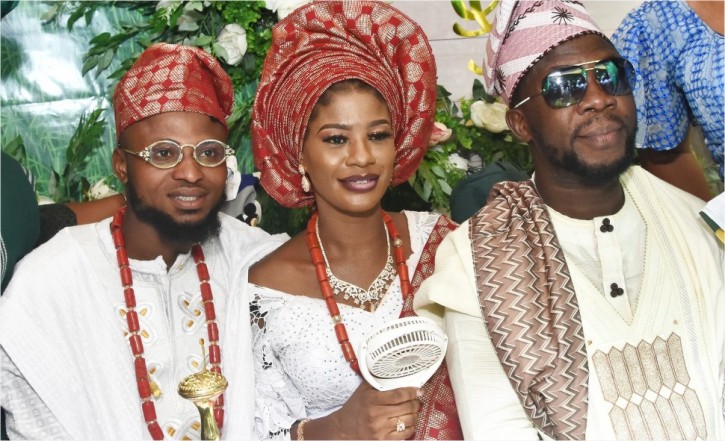 •Details Of The Traditional Wedding

Thursday 13th May, 2021 was the special day for the family of popular Lagos Prophet, Israel Oladele Ogundipe, as Oluwaseyifunmi, the younger sister of Prophet Oladele, popularly called Genesis got married. The engagement ceremony took place at no 10, Ogundipe Street, Jankara Agbado-Ijaiye, Lagos State.

The engagement ceremony was between the families of late Pa Solomon/Deaconess Dorcas Ogundipe and Mr and Mrs Oyelakin, and their children Seyifunmi Ogundipe (bride) and Pelumi Oyelakin (groom).

Their engagement ceremony recorded a lot of people from the groom’s family; majority of them came from their home town Modakeke in Osun State.

Let’s tell you that the groom is called Akoraye and that’s how people who are from Modakeke are called. The groom’s delegation was led by a woman called Otun Iyalode Modakeke. She ensured the outing was successful and memorable, not just for the couple but for the two families.

In the other family; the bride’s family are from Abeokuta, and they are also called Egba.

The programme of the event kicked off when the brother of the bride, Prophet Genesis, arrived the venue with his entourage which included his personal aides, Police, and friends. Immediately he arrived the premises he went straight to his late father’s burial ground, where he prayed for the deceased. Shortly after, he went to where his mom was sitting and prostrated and he was equally blessed by his loving mother.

Let’s also tell you that Genesis’ wife, Mrs Adesola Ogundipe who is popularly called Mummy G, was also in attendance. She was beautifully dressed in green lace outfit, the aso-ebi for the event. A lot of Genesis Global Parish members attended the traditional wedding and they were all dressed in popular green outfits chosen for the ceremony.

Let’s tell you more about the new couple. The bride’s name is Maria Oluwaseyifunmi Ogundipe. She is from Abeokuta, but based in Lagos. She’s the last born of the Ogundipes. She’s is a sister to Prophet Genesis and guests in attandance got to know this not because the Alaga for the event made it known but because they look so much alike. And when the family of the groom paid the bride’s price and other dues to the bride’s family, they rejected it and said they don’t collect money. According to Prophet Genesis, “my father had warned me before he died about this. He said whenever she’s (Seyi) getting married that we shouldn’t collect any money. Seyi (bride) was precious to my father when he was alive and he warned me that whatever anybody should offer that we shouldn’t collect it and for that we say thank you. You all saw that when I entered into the premises, the first place I went was my dad’s burial ground and I have to fulfil what he had told me before he died”. The Alaga for the event was surprised at his action and said ever since she’s been anchoring events, nobody has ever done that.

The engagement was perfectly anchored by TK event, Ododo-Eye. She did her best and it was enough to make the event memorable.

It was a double celebration for the bride, because she also celebrated her birthday on the same day and she was blessed with prayers and gifts.

We would also like to tell you little about the groom. His name is Ifeoluwapo Pelumi Oyelakin. He’s Lagos based but hails from Modakeke, in Osun State. His family was well represented and they had been on their seats long before the commencement of the programme.

The groom’s friends also were wonderful. They were very active and lively and they all dazzled in brown outfits which were beautifully embroidered.

Let’s also tell you that Genesis Pastor, ensured all attendees enjoyed themselves to the fullest, including the groom’s family. He also danced and danced with the new couple. The presence of Juju maestro, Mega 99 is another talking point. He was lively and he rocked the venue with Pastor Genesis.

Shortly after all the formalities, the couple were asked to exchange their marital vows and all other rites were performed as they both became one.

7 Ways You Can Overcome Heartbreak

What OGD Said At 2021 City People Awards In ABEOKUTA