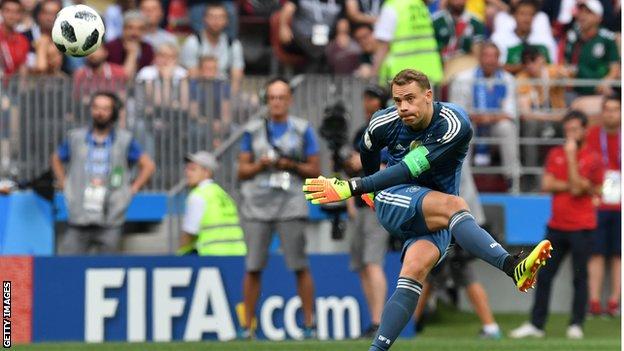 The world champions were beaten 1-0 by Mexico in their opening Group F match, increasing the pressure on them for their games against Sweden on Saturday and South Korea on 27 June.

Sweden beat South Korea 1-0 on Monday and, like Mexico, have three points.

“Every match is like a final. We are convinced we can do it,” said Neuer.

“We are frustrated and disappointed. Now it is up to us to react.

“We know the players on the pitch can deliver and take responsibility so, for me, it is more about readiness to play this tournament at 100% and not about personnel and changing players.”

Defeat by Sweden could mean the earliest exit the four-time champions since the 1938 World Cup and 32-year-old Bayern Munich keeper Neuer was addressing a news conference that was delayed by almost an hour because of ongoing team discussions.

Germany lost to Austria and narrowly beat Saudi Arabia in their final warm-up games for the tournament in Russia.

But Neuer said none of the players are “shying away from responsibilities”.

“We talked about what we must improve,” he said. “We cannot change the result of the game against Mexico or of the warm-up games. Now we have to show what made us strong in the past.

“We have tried to find points that we can improve and say our opinions honestly. The courage and the self-belief was missing.

“I am convinced we can show and will show a different face against Sweden. It is not very easy to just turn the switch. We have to work on it on and off the pitch.”