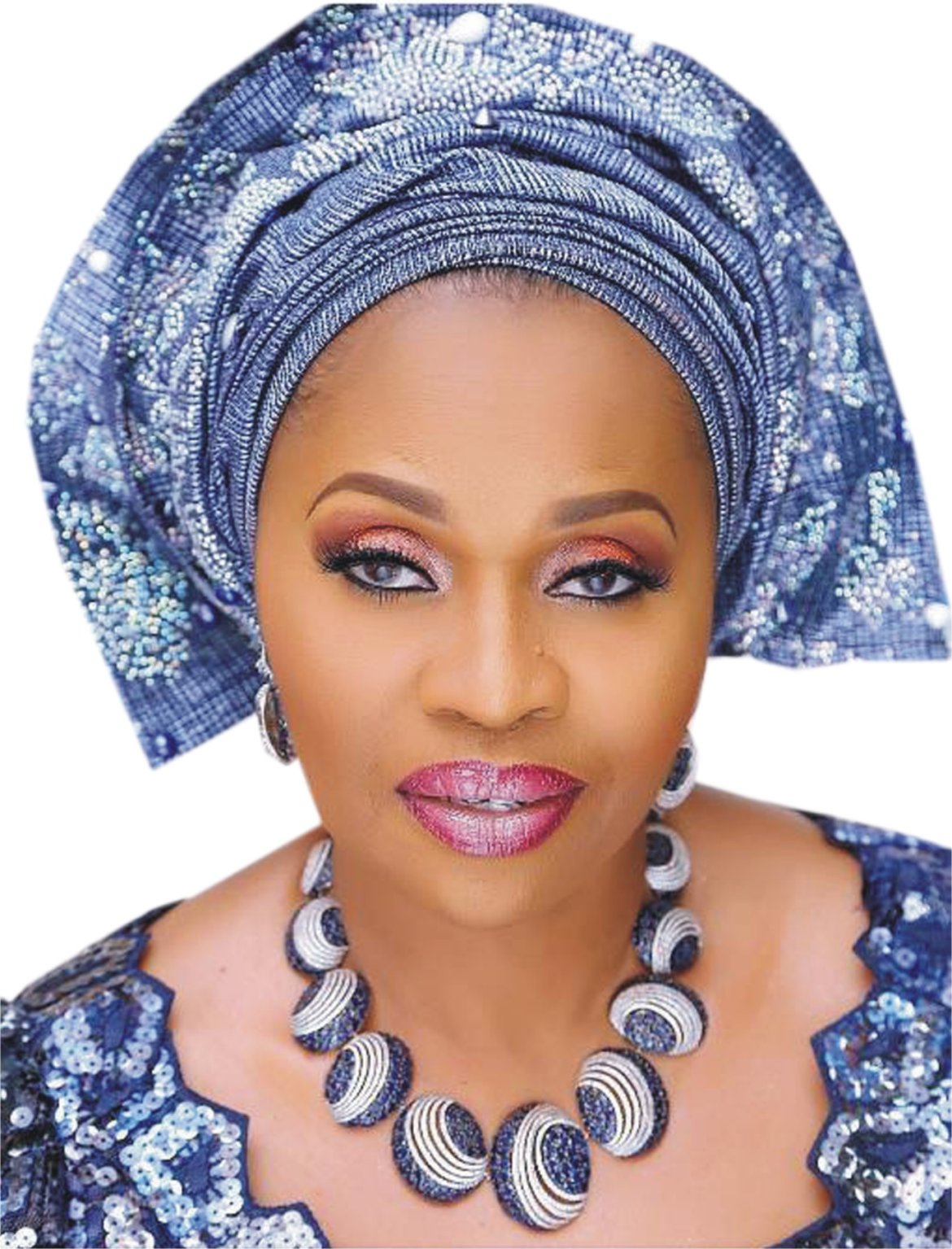 Within the space of a week, Hajia Bola Shagaya, an Abuja businesswoman staged a superlative wedding for Kabir, his son in Abuja and Lagos. Her son got married to Amina Buba,daughter of a northern topshot and Oil magnate, Hajia Hanatu Buba. The wedding Fathia took place at the Noor Mosque, Abuja on Thursday, 26 April, 2018, with the Kamu ceremony and a traditional wedding then after reception took place on Friday, 27 April 2018. It was attended by notable dignitaries like Mrs. Dolapo Osinbajo, who is the wife of the Vice President and also mother of the day. She is the mother-in-law of Bola Shagaya’s son, Seun. And wife of Senate President, Toyin Saraki, among many  others.The grand finale took place in Lagos at Landmark Event Centre, Victoria Island on May 5th. Citypeople’s Society Editor,TAYO FAJORIN OYEDIJI (08111811219) was at the classy party.

RECEPTION PARTY WAS IN 2 CITIES

The wedding reception was held in 2 states. It is only when you have all the wherewithal that you can stage 2 receptions for just 1 wedding. The Shagayas and the Bubas pulled a big one by staging a reception in Abuja after the traditional wedding and all entourage moved to Lagos a week after for another superlative grand reception by the grooms mother,Hajia Bola Shagaya.

BIG SHOTS AT THE VVIP TABLE

At the wedding were huge presence of top dignatries from the north who all came to support the couple especially the couple’s mothers. 3 northern First Ladies stormed the party and were part of the coordinators for cake cutting at the ceremony. They were Hajia Adama Dakwambo of Gombe State,Hajia Asmau Abdulaziz of Zamfara State and Hajiya Mairo Almakura of Nasarawa state.

The wedding had in attendance the wife of the Vice President of Nigeria, Dolapo Osinbajo who also doubles as an inlaw to the Shagayas. She was sitting on the VVIP table, coordinated the cutting of the wedding cake and looked beautiful in her purple lace with simple jewelry,she was at the wedding without her husband, Prof Yemi Osinbajo

Mrs Toyin Saraki was one of the important guests at the wedding ceremony both in Abuja and in Lagos. She was on top of her game supporting one of her big sisters, Hajia Bola Shagaya who hails from same state with her.  She was the first to join in the cake coordination. She also led the wives of Senators to the wedding.

Northern beauty, Hajia Zainab, the mother of Aliko Dangote 3 beautiful daughters, Fatima, Halima and Mariya stormed Lagos again. After she was in Lagos for her daughter’s wedding which made her known to a lot of people, she was seen at the party with her 3 daughters and they were delights for paparazzis who couldn’t take their camera off them.

ALIKO DANGOTE POSES WITH HIS 3 DAUGHTERS

Aliko is such a lover of his daughters and this he never hides whenever they want to have any ceremony. They hold on to key positions in his companies while running their private business asides. When their dad came in, they went to meet him and took some minutes taking pictures with some close family members and his best friend, Femi Otedola.

WHY MANY PEOPLE LOVE EMIR OF KANO

The Emir of Kano is such a lovable man. He is very humble to the core and this was brought put to bear at the Shagaya wedding in Lagos. He sat calmly and attended to everyone who went to greet him. His entourage were very accomodating and when he was leaving,most guests got up to take pictures with him. He has come a long way with Hajia Bola Shagaya. They were classmates at ABU, Zaria.  Many top shots have honoured him by visiting his palace for their childrens wedding fathias in the last 3 months.

AND THE BIG MEN TOO

DO YOU KNOW THE BRIDES MOTHER IS ALSO AN OIL MAGNATE?

Hajia Hanatu Buba is the mother of the bride, Amina and many were surprised to know that she is also an Oil magnate, no wonder the wedding was very elaborate. She is from Jamaica in the West indies and married to Dr. Muhammadu Buba from Nasarawa State, one of her sons stood in as the brides Dad.

Ebonylive TV boss, Mo Abudu has been a stunner for a long time. She has been stepping out lately in beautiful outfits especially at major A class weddings that has taken place in the 3 months. She was also at the Shagaya’s wedding and looked beautiful in a pink outfit.

For the second time in a row, Lagos popular aso oke merchant, TISBEE supplied the beautiful aso oke that was rocked for Hajia Bola Shagaya 2 sons wedding. She supplied the pink gele ebi for Seun Shagaya wedding and the purple Colour for Kabir’s wedding. She was also the official aso oke outfit who styled the couple’s mothers, Hajia Bola Shagaya and Hajia Hanatu Buba.

The beautiful bride, Amina looked like a billion dollar for her wedding. From her pre wedding photo shoots, her outfits at the traditional wedding. Wedding dress she rocked at the reception in Lagos. She rocked an expensive Andrea Iyamah dress, an international bridal house who deal in luxury wedding dresses, infact she will be the first muslimah bride to rock an Andrea Iyamah wedding dress. She is a daughter of an Oil magnate, Hajia Hanatu Buba. She has MSC in Renewable Energy Technology and a Bsc in Computer Science and Business Management. She currently work as an energy sector consultant with the Rural electrification Agency.

The groom, Kabir looked dapper in all his outfits. He was superbly dressed for the traditional and his wedding reception. He is a Lagos big boy and no wonder he was surrounded by his friends, like Seyi Tinubu, Aderemi Sijuwade and many others. Kabir is the Kabir, in his early 30s is the founder/ MD/CEO of his own business-Zippy Logistics, which is an e-commerce brand that is the backbone to some of the biggest e-commerce brands in Nigeria likes of Jumia and Konga and more. The brand from all indications is doing very well. Kabir got his Masters in Innovation Management and Entrepreneurship in Manchester. He was at a time a Special Adviser to the Lagos State Governor, Babatunde Raji Fashola on Climate Issues and Carbon Emission.

SHAGAYA’S 3 SONS AND THEIR WIVES SPOTTED

The handsome sons, Sheriff, Hakeem and Seun of Hajia Bola Shagaya were at the wedding. They all came to support their brother who is joining their club. They were spotted with their wives, Maryam, Amina and Damilola who looked beautiful in their peach dresses

OYIN ADENUGA STEP OUT WITH HUSBAND

Oyin, the daughter of Globacom chairman,Otunba Micheal Adenuga was at the party. She was at the party with her husband, Ade Olufeko.They also stepped out together at the phillips/Dukes wedding recently.

AREMO SEGUN ONIRU Was there

The son of Oba Idowu Oniru, Aremo Segun Oniru was also at the party. He stormed the party halfway and was seen with Ovation boss, Chief Dele Momodu.He also wore the uniform cap.

2 famous educationists, Yoyin Makanjuola,the wife of Carverton Helicopter boss,Niyi Makanjuola and Mrs Folake Abdulrasak,the wife of Dr Alimi Abdulrasaq and Executive Director of Bridge House College party together. The duo are best friends and have been seen together mostly at some corporate parties.

SO THE COUPLES MOTHERS LOVE TO DANCE?

The beautiful mothers of the couple,Hajia Bola Shagaya and Hajia Hanatu Babu really love to dance. At the start of the event, both danced in with their retinue of friends with a lovely music from award winning band,Shuga Band.