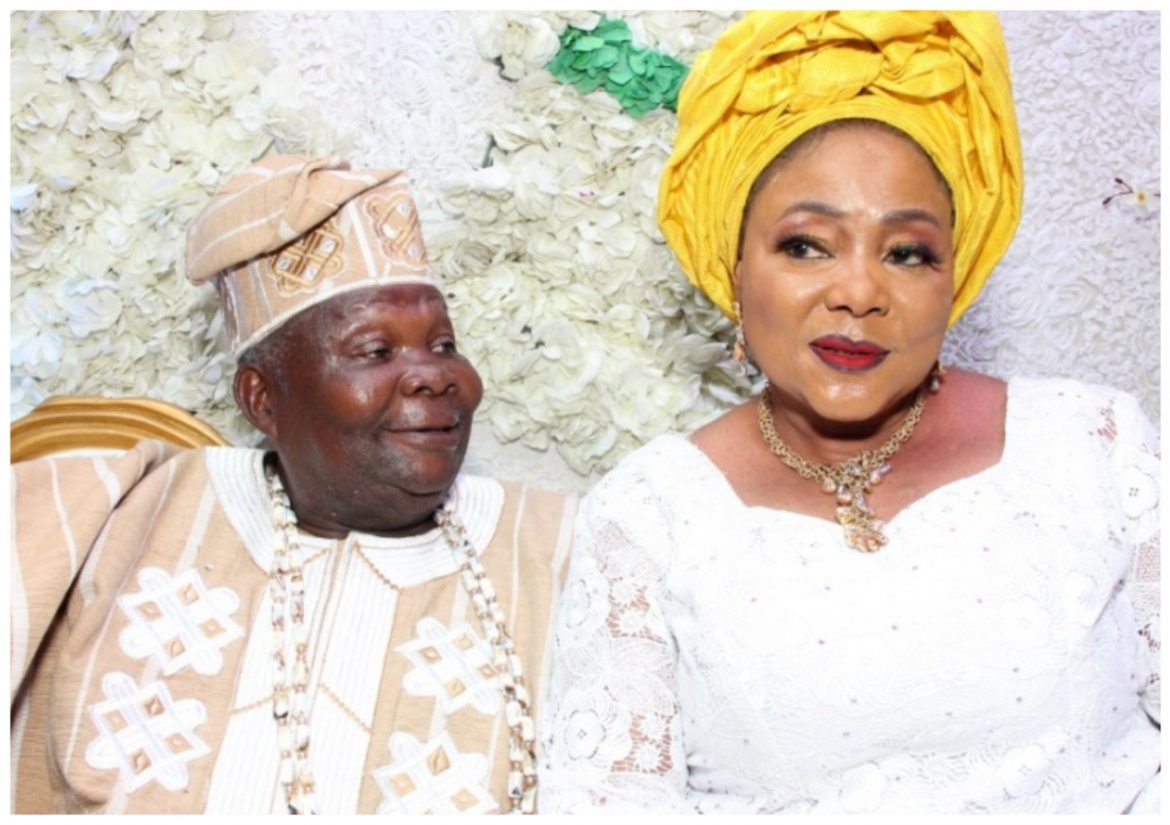 •Details Of The 80th Birthday Party For Pa SULAIMAN ELEMOSHO

Amidst pomp and pageantry, the entire members of the Elemosho dynasty on Sunday, March 6th, 2022 led a mammoth crowd to the interior of Apapa, Lagos, where they celebrated the 80th birthday of their hero, father and grandfather, Alhaji Sulaimon Elemosho.

At about 1:00 pm, guests started occupying the Ifelodun LCDA Hall, the venue of the party. It was beautifully decorated with a touch of white, purple and yellow, the colours of the day.

Alhaji Elemosho is a blessed man, who is ageing gracefully. He is a husband of four wives, father of about 14 children and grandfather of many grandchildren. He is the father of the popular Lagos celebrity woman, Alhaja Taibat Elemosho-Okesanjo, one of Lagos biggest shoe merchants.

City People’s Brands Editor, DAMILARE SALAMI (08155134152) and senior photojournalist, Abdulrasheed Sanni covered the event and here are some of the exclusive gists from the party. Enjoy.

AN ARRAY OF ISLAMIC SCHOLARS PRAYED FOR BABA @ 80

Just as the event was commencing, an array of top and fast-rising Islamic clerics made it into the auditorium for the prayer session. About 15 different Islamic scholars and students were seated on the high table to say words of prayers for the celebrant, his children and the entire members of the Elemosho family. Top on the list was Sheikh Surajudeen Folorunsho Asukuna, the chief missioner of Isbilahi International and newly appointed Amir Zakir of Oyo State.

Let’s quickly tell you that Baba Elemosho’s birthday party started on a very high note with young Abdulwahab Oyetade displaying his Arabic skills as he recited the Quran off-hand for a couple of minutes. The young student held the entire congregation spellbound with his confidence, poise and vocal dexterity. He later got donations from the congregation who appreciated his focus, attention and willingness to learn at such a tender age.

As we stated earlier, there was an array of top Islamic clerics at the event, one of such was Alhaji Sulaimon Obalola Sanni. He is a sheikh with class, dignity and honour. He came with a large entourage, made up of students under his tutelage. He is a very popular Islamic scholar with a difference.

WHITE WITH A TOUCH OF YELLOW & PURPLE ON RAMPAGE

The most significant colour on that day was white. Virtually all the guests complied with the colour code. However, some complimented theirs with purple gele and cap but for all members of the Elemosho family, it was combined with yellow headgear or cap, as the case may be.

Alhaja Taibat Elemosho-Okesanjo, popularly known as Hajia Montai, is Pa Elemosho’s first child and she led her siblings by example at the event. While others were still looking for a way to settle their guests, she took the front seat during the prayers and instructed all her siblings to leave whatever they were doing to join the prayer session. According to her, the prayer session is more important in the celebration than any other thing they could think of. She also led by example during the alms and offering sessions of the prayer.

Many wouldn’t believe that the celebrant is already an octogenarian. His energy, vibe and agility were like that of a 50-year-old. Pa Elemosho is indeed blessed with good health, a sound mind and fulfilment of purpose. At age 80, Baba still dances well and feels so strong. A lot of people at his age can no longer walk without being aided, let alone stand on their own without support. For Pa Elemosho, he believes that life has just begun and as a proud father and grandfather, he was super excited on his birthday, seeing his wards flocking around his table.

Her voice was very powerful and the manner in which she articulated the panegyrics of the celebrant made the congregation focus their attention on her. Female Ewi Poet, Faridat Amdalat is a Kwara-based oral traditional poet who took the congregation by storm at the party. The feedback from her listeners was positive and there is no doubting the fact that she did a very good job and left the stage on a high note.

Madam Kofo needs no introduction. She has been a regular face on TV for as long as we can remember. She is an actor, broadcaster, and a compere. She is popular for her customary gele style which has become her signature. Madam Kofo is not just a compere, she can also double as an oral poet with a deep knowledge of the Yoruba culture and history. She took over from the clergymen after the prayer session and ran the show from the beginning to the end. You already know that there is no dull moment with her and she does not overdo anything. Her skills came to the fore at different times in the event and the guests enjoyed her overall performance.

The musician at Pa Elemosho’s party is the son of the late I.K Dairo. He also bears the name of his father and performs just like him. Many people who are familiar with the old I.K Dairo know him to be a maestro per excellence. He was one of the biggest exporters of Afro-highlife music during his lifetime. I.K Dairo Jnr didn’t disappoint, he did well even if it is very difficult to say that he stepped into his father’s shoes at a first appearance.

PA ELEMOSHO’S WOMEN WERE ALL SMILES

Do you know that Hajia Montai’s friends stormed the venue of the party in style? Many of them stay very far away from the venue and yet, they still made it down not minding all the challenges on the way. They included Hajia Iyabode Ninalowo, Mrs Adebimpe Amodu, Hajia Nana Yakubu, Yeye Folashade Ojo, Bunmi Ayuba, CEO, Tailor Made, and many others. They were all glowing in their different outfits, they added colour to the already classy event.

Let’s also quickly tell you that one of Naija’s finest fashion designers, Bashy Kuti was present at the event. Bashy Kuti is a stylish designer who has carved a niche for himself in the fashion industry. He is a multiple award-winning designer who sews for all the biggest names in Nigeria. Despite being an Ibadan-based designer, his location hasn’t been a barrier, instead, it has an advantage.

Baba Elemosho wept on his big day! But common, it was the tears of joy. Baba was overwhelmed by the quality of love and affection he received as he clocked 80. He was surrounded by his nuclear and extended family as well as their friends, family and well-wishers. At some point on the dance floor, Baba busted into tears, this was because he was overwhelmed by the love he received. This happened when all his children came around him at the same time and started spraying him. It wasn’t his children alone, their spouses came around too. The love was so overwhelming that it could melt the heart of the world’s strongest man.

One of the richest spots at the event was Alhaji Abiodun Okesanjo’s corner. Alhaji Okesanjo is the husband of Hajia Montai and they are blessed with a beautiful daughter. He had most of the celebrity men at the event on his table. Bashy Kuti was among those who shared the table with him.

Mrs Bisi Omogwe, the CEO of Bissy Yoyo Platters, led her girls to serve garri and seafood at the event and it became the most sought after meal. Of course, garri is an appetizer for most Nigerians but at the party, it became the focal point. Most of the guests wanted to have a taste of this rare and special delicacy at parties.

Those who served as vendors at the event are Bissy Yoyo Platters, Tee Lala Diamond, Stomak Reeper, Discernment Events, and others.

Why I Want To Be The Next OYO State Governor – Popular Politician, BISOYE FAGADE