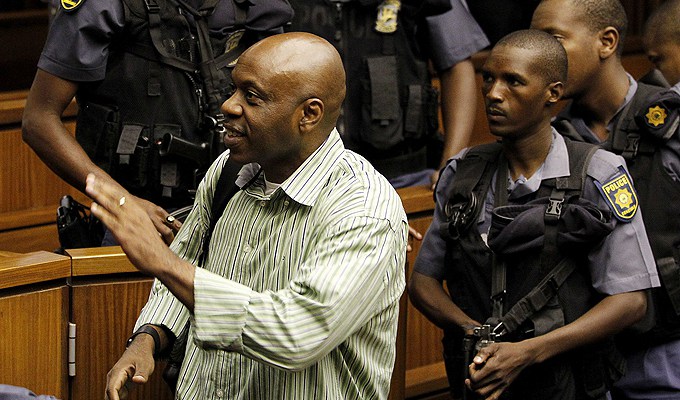 The Movement for the Emancipation of the Niger Delta MEND, a body known to be articulate about the wellbeing of Niger Deltans has said its leader, Henry Okah, is dying in a South African prison where he is locked up in solitary confinement.

In a statement released by Jomo Gbomo on Saturday, MEND described Okah’s condition behind bars as gory and unsavoury.

The group urged the national assembly delegation to South Africa to look into his case and other Nigerians suffering xenophobic attacks in South African prisons.

“We welcome the decision of both houses of parliament to send delegations to visit South Africa to assess the situation on the ground,” the statement said.

“While we commiserate with the thousands of Nigerians who may have suffered one form of attack or the other; we are constrained to draw the attention of the National Assembly delegation to other variants of xenophobic attacks which are not in the public domain.

“There are hundreds of Nigerians in South Africa who are serving various prison sentences or awaiting trial. From reports available to us, many of these unfortunate Nigerians are subjected to xenophobic attacks as they were regularly singled out for harassment, on account of their nationality or arbitrarily isolated in solitary confinement, by the South African prison officials.

“Henry Emomotimi Okah is a Nigerian who is currently serving a term at Korkstad Prison in the Kwa-Zulu Natal Province of South Africa. The accounts of few persons who have been privileged to visit him in prison are gory and unsavoury.

“He is permanently locked up in solitary confinement; a Korkstad Prison policy which is based purely on xenophobia and jungle justice. The grim reality is that Henry Okah and many of his fellow compatriots in South African prisons are dying in prison.

“We therefore call on the Nigerian parliamentary delegation to find time to also visit various prison facilities in South Africa where they will indeed, be confronted with the real victims of xenophobia in South Africa.”