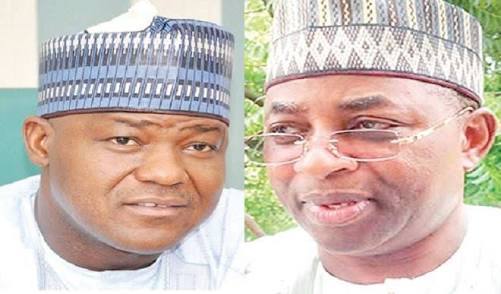 Bauchi State Governor Mohammed Abubakar on Tuesday threw a jab at the Speaker of the House of Representatives, Yakubu Dogara calling him ‘a sinking man desperate to hold on to any straw for survival’.

Speaking to newsmen at the APC National secretariat in Abuja, Gov Abubakar also cautioned the nation’s number four citizen, saying the Speaker cannot afford to be careless in his utterances.

“I understand where he is coming from. He is a sinking man and so, he is grabbing everything he can hold on to. I am not his opponent in the election.

“But today, Buhari is President of Nigeria and I am governor of Bauchi state. Secondly, people should understand that Dogara represents a total of 80,000 registered voters and I won elections in 2015 with over 300,000 differences. Please do your arithmetic and place it very well.”

He went on: “Go to the website of the Federal Ministry of Finance, download the total allocation to Bauchi state from June 2015 till date and do a calculation.

“You will have a total allocation for the entire Bauchi state. It is not up to N400 billion.

“I have consulted with my lawyers and I intend to sue Dogara and so, I will not comment much on his claims.

“I have said that Dogara should be careful in his utterances because he speaks without considering what comes out of his mouth.”

On the marching order to security agencies to arrest electoral offenders, especially ballot box snatchers by President Muhammadu Buhari, Abubakar said: “Mr. President is the chief security officer of Nigeria. Anybody who snatches a ballot box is a common criminal under the law.

“So, if it takes stopping criminals to ensure credible elections, so be it. There is nothing wrong about stopping criminal, even you as a citizen as the right under the constitution t9 stop criminals in the act of committing an offense.”