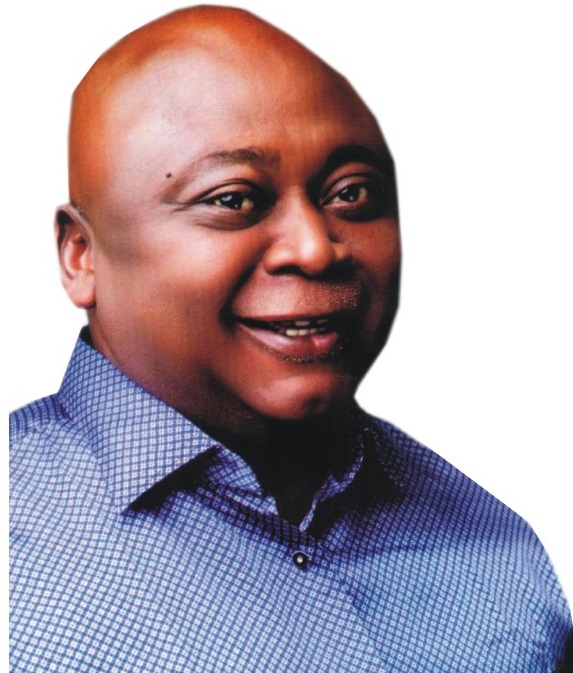 To Get More Support For His Guber Ambition

For sometime now, the rumour mill had been agog with rumours that former Ogun Governor, Otunba Gbenga Daniel, who is now the D.G of the Atiku political campaign, had quietly withdrawn his support for his political godson, Hon. Ladi Adebutu who wants to run for Ogun governorship come 2019.

This is because a few years back, when he began moves to run for Ogun governorship, Ladi was everywhere, with OGD, pushing Ladi’s candidacy, until things changed and the tempo of the campaign began to waned. Insiders say it was because Ladi was reported to have made some uncomplimentary remarks which suggested that he could win the elections with or without OGD’s support and input. Sources say one of the supporters of Ladi, who is also a member of the OGD political family was said to have relayed the alleged comments attributed to Ladi that he can on his own win the governorship. We gathered that OGD didn’t believe the story. He felt it was just a move to discredit his political godson. But when Ladi began to distance himself from the  Sagamu home of OGD, tongues began to wag that perhaps Ladi and his group were really determined to pursue the campaign all alone. Of course, a few mischief makers cooked up all sorts to further widen the gap and schism between the 2.

But a few days back, Ladi’s father, Chief Kessington Adebutu led 10 top traditional rulers from Remo to the Sagamu residence of OGD to enable Ladi reconcile appropriately with his political godfather. That two groups were said to have effectively resolved all the grevy areas as Ladi, reportedly restated his commitment to the OGD political family and OGD promised to continue to support Ladi’s ambition.  Now, both are back and Ladi has revved up his campaign for governorship. And more than ever before his dad is very involved in the campaign, along with many elders from Ijebu-Remo.

His Father, Sir Dr. Chief Kessington Adebukunola Adebutu, is the Balogun and Babaoba of Iperu Remo, Akogun of Remoland, the Olotu as well as the Asoju Oba of Lagos. He hails from the renowned Adebutu Family of Eti-Obale, Iperu Remo, and the Apondele royal family of Ode Remo, while his mother Dame Caroline Oladunni Adebutu is the Yeyemode of Iperu Remo, Apesin of Lagos and Yeyeoba of Odogbolu and she hails from the Jaiyesimi Okuwa family of Odogbolu.

He started his elementary education at the International Day Nursery School, Yaba in 1964, before proceeding to St. Saviours Primary School, Oke-Ira, Ebute-Metta, Lagos. He later proceeded to Igbobi College where he obtained his West African School Certificate in 1978.

Upon the completion of his Secondary Education, he traveled abroad where he studied at the St. Columbas College, Rathfarnham, Dublin and obtained the Irish Leaving Certificate in 1980. He commenced his tertiary education at the National Institute of Higher Education, Limerick, Republic of Ireland. He also attended the Regional Technical College at Athlone and Carlow in the Republic of Ireland between 1981 and 1984.

He had his primary assignment in the National Youth Service Corps Scheme in Biu, Borno State between 1987 and 1988. He worked briefly at Kesington Industries, Iperu Remo between 1988 and 1991. In 1991, he became the Chief Executive Officer of JB Farms Ltd and established Solomon Kesington Agro-Allied Limited shortly after. He is till date the Chief Executive Officer, and one of the largest livestock farmers in the country. He also serves on the board of the Premier Lotto Limited as an Executive Director. He is the Chairman/CEO of LADO Tourism and Real Estate Limited.

Hon. Ladi Adebutu is a politician of high repute, he became a member of the National Assembly in 1992 on the platform of the defunct Social Democratic Party (SDP), when he represented Remo Federal Constituency.

He was a Senatorial Aspirant under the United National Congress Party (UNCP) in 1998, as well as a National Assembly Aspirant on the platform of the Peoples Democratic Party (PDP) in 2003, 2007 and 2011 respectively.

He was appointed as Full-Time Commissioner II in the Ogun State Local Government Service Commission in Sept., 2007. In October 2007, he was upgraded to Full-Time Commissioner I within a period of one month because of the zeal he brought to the job. During his stint at the LGSC, he was instrumental to the appointment, promotion, conversion, upgrading, and training of Local Government workers across the state. He also used his good office to secure employment for several Ogun State sons and daughters in other parastatals and agencies of government.

He was elected member of the 8th National Assembly during the March 28th, 2015 General Elections, on the platform of the Peoples Democratic Party (PDP) to represent the Ikenne/Sagamu/Remo North Federal Constituency of Ogun State, at the House of Representatives, Abuja where on account of his ranking status and

experience as a lawmaker in the National Assembly, he became the Chairman, House Committee on Rural Development. 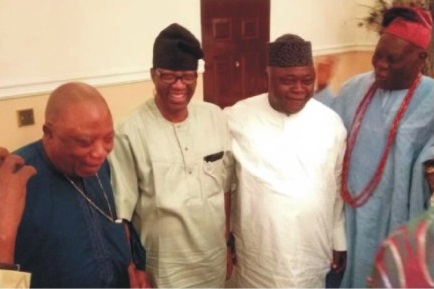 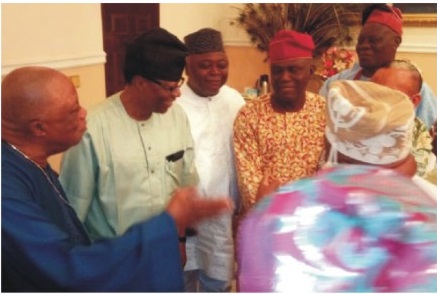 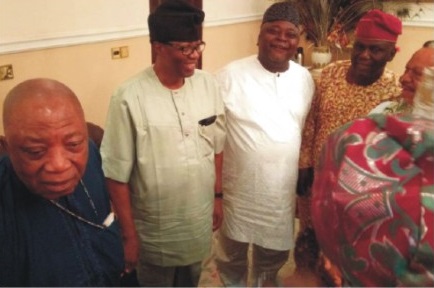 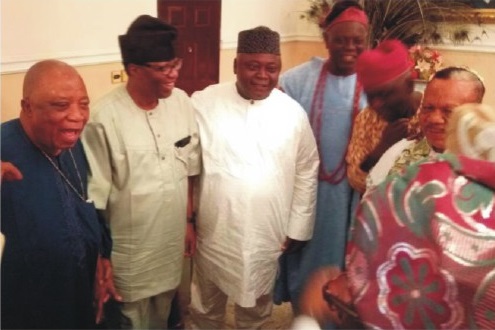 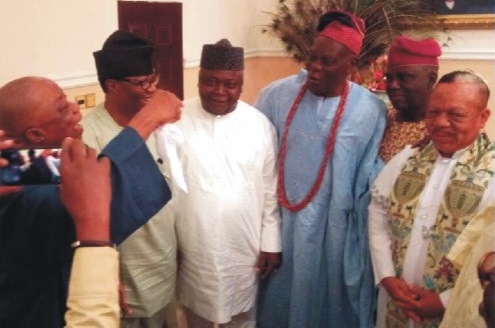 In appreciation of his invaluable developmental strides, he has been honoured with the Chieftancy titles of the Okanlomo of Iperu Remo, by the Alaperu of Iperu, Oba Adeleke Idowu Basibo, Odoru V; Aruwajoye of Ode Remo by the Alaye of Ode Remo, Oba (Surv.) Amidu Oso, Daniyan II and the Otun Ajagungbade of Remo land by the Akarigbo and Paramount ruler of Remoland, Oba (Dr.) Michael Adeniyi Sonariwo, Erinjugbo II respectively. A detribalized Nigerian, Hon. Oladipupo Adebutu was also conferred with the highly-revered title of Maiyakin by the Nupe Community in Remoland. Hon. Ladi (as he is fondly called by numerous admirers) Adebutu was aslo conferred with the prestigious title as the Otunba Nawo Ola of Odogbolu by His Royal Highness, Oba Adedeji Orragoruwa, the Alaye of Odogbolu.

A socialite of no mean standing, he belongs to the famous Akesan (Iperu) Club 1954 and the prestigious Remo Club (1937). He is also an honorary member of the Lions Club (Abeokuta Metropolitan), Island Club of Lagos and Vice Patron, Abeokuta Sports Club.

LADO AS A RELIGIOUS MAN

Many don’t know he is a devout Christian, who aside from being committed to various works of humanity, also understands the importance of spiritual balance; thus, he is very involved and committed to God’s work. He is an active member of the Celestial Church of Christ and the Patron of Celestial Church of Christ, Tiwadire, Ipinle Ogbon, Iwera Parish, Sagamu. He also holds the title of Baba Ewe of the Methodist Church, Ibu Road, Iperu Remo.

Hon. Ladi Adebutu, an ardent soccer lover is the Proprietor of the LADI ADEBUTU FC; Patron of Remo Football Academy and Ikenne Local Government Football Council. A loyal fan of the Chelsea FC of England, he has successfully sponsored the first and second editions of LADI ADEBUTU Under-20 Football Competition for Youths in the Ogun East senatorial district.

Some of the talents discovered during the competition, Ibrahim Deinde, Ayodele Femi and Udoh Akpan have played for the National under 13, 15 and 17 respectively. Udoh Akpan is the First Choice goal keeper of the Victorious Golden Eaglets at the 2015 Junior World Cup held in Chile.

He is a versatile politician with bias for the people at the grassroot, a highly industrious individual and a very amiable, humble and accommodating personality; someone who believes that success in life is irrelevant, if it is not relevant to the need of others; a true and genuine leader who having discovered himself and his purpose for living is greatly committed to exploring and expressing himself fully to the glory of God and benefit of mankind.

As the member of the Federal House of Representatives (Ikenne/ Sagamu /Remo North Federal Constituency), Hon. Ladi, has sponsored Motions on the Floor of the House calling attention to some critical areas where legislative action is required. He raised the pertinent matter of the Sagamu-Ogijo-Mosimi-Ikorodu road, a 25-km Federal Highway linking Ogun and Lagos States, which hosts several economically- strategic installations such as the Pipelines and Products Marketing Company (PPMC). The highway serves as a major distribution route for petroleum products to various parts of the country, but its abysmal state. poses grave danger to lives and property.

He has also highlighted the structural challenges relating to the Lagos-Ibadan Expressway and the Sagamu-Ore-Benin Expressway and their impact on motorists, pedestrians and host communities alike. He called for relevant repairs and pedestrian bridges to be constructed along the routes to increase safety for all road users.

Hon. Adebutu has consistently championed issues of safety on Nigeria’s major highways and said that he would like to see an improvement in their condition, as a way of reducing the high incidence of injuries and fatal road crashes.

As Chairman of the House Committee on Rural Development, Hon. Adebutu, regularly speaks on behalf of rural dwellers who form a large percentage of the total population and are responsible for food production in Nigeria.

Development in Nigeria. To add weight to his views on this, he sponsored a Motion urging the Federal Government to give rightful attention to the rural populace by accommodating their needs in Budgets and National Planning.

As a Member of several House Committees such as National Planning & Economic Development, Local Content,

Basic Education Services and Urban Development and Regional Planning, he makes regular contributions to discussions and fully participates in strategizing on oversight activities for Ministries, Departments and Agencies.

During the House Debates on the 2016 Budget proposals, Hon. Adebutu made a robust contribution on the floor of the House calling for rural development to be accorded the funding it requires to effect the necessary changes.

Agriculture is also an area of interest for him. During a media par1ey in Abuja, Hon. Adebutu observed that: “Nigeria must now as a matter of urgency, adopt wholesale, agri-business as a strategy to earn revenue from processed agricultural exports.”

Hon. Adebutu has also translated his concepts for good governance into several empowerment and welfare schemes for members of his constituency. These range from Skills Acquisition Programmes, Community Development Projects to Trade Establishment and Scholarship Schemes.