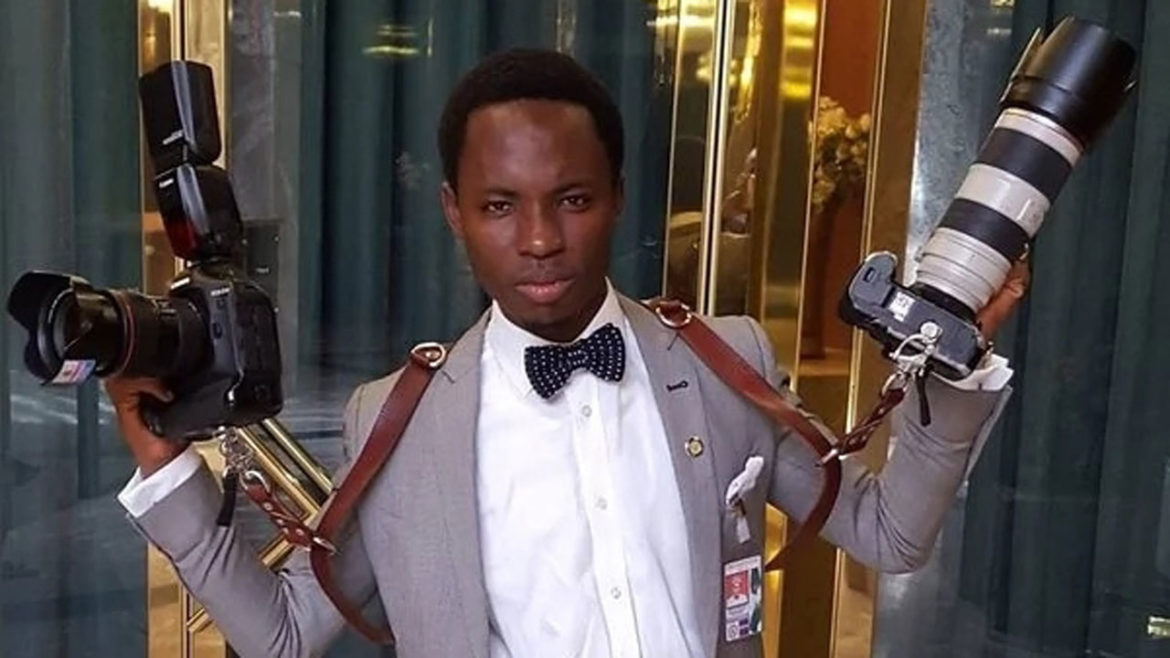 Bayo is only 31, but he has already achieved remarkable success, becoming the official photographer of President Muhammadu Buhari. Bayo Omoboriowo is talented, hardworking and gifted. He is the young photographer,  who has carved a niche for himself, as President Buhari’s Photographer. He holds a double portfolio by also being the special official photographer of the State House. It will also amaze you how he got to the top. It was through sheer and passion excluding connection.

Omoboriowo discovered his passion and turned it to big business. Prior to becoming the first citizen’s photographer, he had worked with Red Media. He is one of the youngest office holders in Aso rock if not the youngest. He became President Buhari’s personal photographer in 2015 after being his photographer for all his campaign rallies.

In 2009, Omoboriowo graduated from the University of Lagos and since then, he has been doing photography. He graduated with a Bachelor’s degree in Pure and Applied Chemistry at the University of Lagos and has turned down several high profile jobs, offers to face his passion. He was in the 20-man delegation that accompanied President Buhari to Germany for G7 Summit June 7, 2017.

Bayo was born without a silver spoon in his mouth. He tasted poverty, experienced low esteem that dogs the poor, but never allowed his past to define him. He decided to change his story and that he has successfully done, looking at what he has achieved within a space of years. He was born in Mushin and lived the very first 15years of his life there. He had it very rough going to school, but because his father was a member of of the University of Lagos and was also the official photographer of the school, he had an edge to continue his education within the walls of the university. Not only has his story changed with the president all over the world, but he has been able to give back to the society through his NGO, Unabashed.

He is happily married to Omolola Omitokun and blessed with twins recently spoke about his rise to fame, grass to grace story and how he got the juicy job of being President Buhari’s photographer. He spoke with City People’s Society Editor, TAYO FAJORIN OYEDIJI.

Let’s talk about yourcurrent job as president Buhari’s personal photographer. How do you feel takingup such a huge portfolio?

Well, I feel it’s a great opportunity, I feel it’s a rare opportunity for someone so young like me to be the personal photographer of Mr. President and it would be the first time in the history of Nigeria. It is a golden opportunity, but much more to that I have seen this platform as a learning curve, a level of experience I have garnered in the last 3 years can not be bought with money. I have been empowered, I have seen the realities, I have been able to learn so much and I can easily say I am equipped for the future.

The level of work and the level of how I have developed is amazing. I came here raw, but I am now baked. Leave  politics, I am not concerned about politics, but I have been able to see the reality of national development, I have seen what is wrong, I have seen what can be done better, I have seen many things as one of the youngest persons working in The Presidency if not the youngest, even in the history of The Presidency in Nigeria, so my knowledge, of Aso Rock can not be quantified, I am really equipped for the future.

When you got the job,were there no fears as to taking up such a huge job?

No, I did not have any fear. Life is a process and before you get there, the most important thing is be equipped. Most people are afraid of huge challenges, I saw it as a challenge, see, I really didn’t want to do this, even when I started I wanted to back out. Some people say oh! Such  a job will be so interesting and all, that I never saw it that way. I am a core, hardened passionate photographer, photography is my life. So, I saw this as another challenge and that was why I said earlier that the President is a subject and I am documenting a subject, so coming here is another level of opportunity.  I have been to Ekiti, I have been to Osun. I have been doing this for free. Nobody paid me and I never knew I would be with the President, but those times were preparatory stages. I didn’t know anybody, but was just doing my thing. So, I did not know that could have set me back or make me nurse any fears that I had already learnt and prepared for.

How did the President find you despite that you are very young and also a where was the exact connection?

There was a need for political photography that I wanted to fill, which made me align myself attending political events and be taking photographs, so it took me to Ekiti and Osun at that moment doing what I love to do most without being paid. I would just post them on my social media pages. So, I evolved into documentary photography then to a photojournalist. I saw a need or a gap in the photography landscape. I am an ardent newspaper reader and I look at it and mostly, many photographs in the papers are political photographs. The photographs portraying the president or governors I saw them as bad photographically. I saw that there was a gap and someone needed to fill that gap. Brilliant photographers were not involved in political photography, so I found a need and I was ready to solve the problem. So, that was what took me from being a documentary photographer to photojournalist and that was why I went to Ekiti, Osun and Lagos without being paid to be following political figures up and down.

And that was how I way to APC national convention in December 2014 at Teslim Balogun Stadium. I did not know Buhari or ever met him before or anybody there, I was student of journalism and I was not the official photographer, but I there to take photographs just as a passionate , who wanted the game in the political Photography and I found the man, Buhari, was talking about. So, I just randomly started taking photographs to cut the long story short, He won the APC ticket, I took the I remarked. Oh! This is good, I rolled on the floor and waited all through, my phone was stolen and I told said Aaah God see o. My phone I am passionate, reward me o. This effort must not be in vain o, I did not even know hearing me and that was how Buhari won and I left there. But over , Ekiti election and all these things, I used to post them on , I didn’t know people were watching, so when it was time for them to photographer, who the campaign in January 2015 said they held a meeting. They called that I was the best man for the job. It was a reference from all the I have done and posted on social media and that was how they called me started with Buhari. I did not know President. Buhari from anywhere or , who connected me. He did not know me as well. The first time me to him that, this is the guy, who taking photographs for the campaign, okay and that was how we started the campaign. was satisfied with saw, he was excited seeing his photographs, he was satisfied with , with the and the passion at which I was doing the job.

was he sacrifice I make sure he liked everything I did and when it was time to choose , he said Bayo will be his photographer and that was it. make of thinking. it was , it had nothing to connon. It was just pure hardwork and the grace of God.

positioned a , who did not know anybody, I did not have , I don’t know any politician or even a local government chairman, saw , he saw diligence ,he saw , he saw what I have and that is why I say, life is a process, I was just doing my thing and Osun, I did not know people were observing. But when it was time,they just said that guy that did this is best for the job. All I did was media, so they just said, it’s that Bayo Omoboriowos who has been like this that we should call for the job. So, I think the thing in life is keep doing what you are doing and be it.

It will find you. I always tell people, don’t major on and minor on major, you are majoring on irrelevancies, Oh, let them see me, let me be out there, I have been doing this for many years, let them call me, let them connect me, NO, focus on excellence, diligence and they would naturally because excellence is rare, but those that had it and are strategically positioned especially in this part of the world, people are either chosen for money or something else. If you choose passion, excellent service delivery, would always be your limits.

How is it like working with the president especially during photo sessions when you will have to tell him to or sit this way or that way?

He says I am the only one who tells him what to do and he will do it. He will say Bayo is the only one who does that, who  will tell me to sit or stand up. So, I am the commander of the commander-in-chief, I command the commander-in- chief. I work like that because I know what I want, I want the best for him, so over the years, he has gotten used to me, he knows how I want his photographs to look like, he understands I can never settle for less than excellence. He understands that I will not compromise, no matter what he says.

I will do it the way I want and he would say Bayo is so restless, that is what he says because he knows I will never give up. I must get what I want and can never see me slacking. There  was one day, he said Bayo this is the only time you will come late and I said, no, I did not come late, I was just at the door and it was not yet time for me to come in, that was before the arrival of the German President and chancellor. And he said aaah, he was wondering and that tells you that he knows I am always on time, so it has been like that, I am sure he is satisfied with the way I work and he is quite impressed with my passion, dedication that I put to my work.

How does he normallystart his day?

There are schedules. It is not just that I take photographs just like that. It is not like you did not take this, you did not take that. We always study all that is happening around him. Where we should be, what to do and which photos to take. So, we follow a schedule, everything has been arranged.