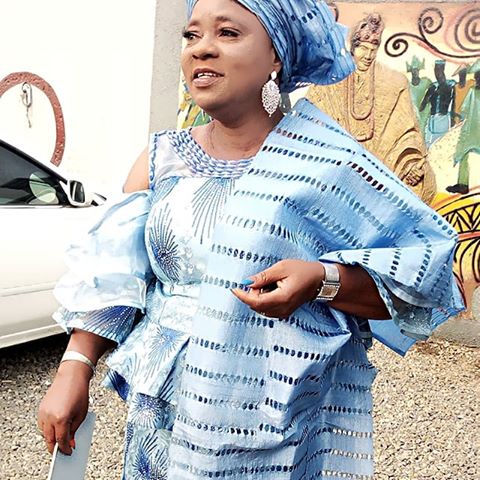 •Says: I Act, Produce& Market My Movies Myself

Princess Adebisi Okunnuga is an elderly woman who has done a lot in the Yoruba movie industry. She is hardworking, she is industrious, she is creative she is also focused on making it in the industry. She as “Omoge ” She joined the movie industry in the . She started in 1980. She is one actress who has earned herself so much respect in the Yoruba movie industry. She was born in Lagos and attended Our Lady’s Of The Lord Primary School at Surulere, Our Lady of Apostle Secondary School in Yaba,  but later switched to Archbishop Aggey Memorial Secondary School. She joined a theatre group in 1980, training under Adebayo Salami (Oga Bello), Sunday Omobolanle (Aluwe) in Ebute Metta. She has produced so like Haa Obinrin, Oloruntedo, Erujeje, Oko Mi Ni, Iya Eko, and many others.

In this interview with City People Publisher, SEYE KEHINDE andSnr. Movie Reporter,  BIODUN ALAO, she talked about her bitter ordeal in the hands of marketers, which made her lose everything she invested at the beginning and how she almost gave up on her career. But with determination and , she was able to stand on her feet and used her movie, titled “Haa Obinrin” to make a come back into the industry. That was the movie that made her break even in 2010.  She also talked about her journey into the industry and why she sells her movies herself. Below are excerpts of the interview.

Can you share with uswhat has kept you going in the industry, after several years?

I started acting when I was very young and I give the glory to Almighty God for taking me this far. In 2009, if you had seen   me then, I was nothing, simply because a lot of marketers were owing me so much money. It became so difficult to even eat I was using Benz 190. The marketers refused paying me my money. In 2010, I produced my movie titled “Haa Obinrin”, I started shooting in 2010 and finished production in 2011, things were really difficult for me, I could not even produce movies again. I will just sit down and be crying deep down in my heart, I started begging God to show me the way out of my nursery. Lots of people started advising me, to take another step instead wallowing in self pity, so I went to Abeokuta with my movie “Haa Obinrin”, I trekked to lots of places hoping to get positive result with my latest movie and God eventually did it.

Between 2010 till date,how many movies have you produced?

I can count at least 20 movies, such as Haa Obinrin, Okomi Ni, Oloruntedo, Erujeje, Olorun Le, Orun Eberu, all these are soap opera and they are all 26 episodes.

What is that youfocused more on series than movies?

Do you have any stagename?

Yes, I do, my stage name is “Omoge Onidan” later, they started calling me “Iya Eko”.

How did you come about the name?

In 2017, I shot the movie “Iya Eko”, when the film came out, they started calling me “Iya Eko”, even lots of people don’t even know my real name again. I give glory to Almighty God.

It’s been really long o that is 1980. The likes of Bisi Ogunde, and many others that I can’t remember their names now, we all started together.

What compelled you todo into acting?

In 1980, I was in school, I schooled at Lagos, whenever I am going to school, I see the likes of Oga Bello, “Adebayo Salami”, Sunday Omobolanle “Aluwe”, where they are doing their rehearsals at Surulere, so whenever I am coming from school, I stop over to practise with them and that was how I joined them. My father never supported my decision to become an actress. Most times, he will come cain and chase me away. But I have strong passion for it, after promising my dad that I won’t join them again, I will still sneak there to join them, from there, I joined ANTP. I got lots of training from one group to another. To God be the glory, I now have my personal group that I train upcoming stars how to act.

Tell us about yourfamily and educational background?

I was in Lagos, schooled in Lagos and got married in Lagos. I was born in Surulere, from Mr. & Mrs. Oluwadare, I went to Our Lady’s Of The Lord for my Primary School, and Our Lady Of Apostle. I eventually finished at Archbishop Aggrey in Ilasa. I went to Doctrine School for 2 years. I can say, I am an Evangelist, but I am not practising because of my acting job through many says, I don’t look Yoruba but I am actually from Ondo State.

Having spent over 3decades in the industry, do you have any regret?

Yes I do, lots of them, that I don’t even want to talk about in this industry but in all I give glory to Almighty God. It’s in my past now.

Would it be right tosay you are a movie producer and marketer?

Yes, I am a marketer, I market all my movies, under “Adespring Nigeria Limited”. And I sell strictly just my movies. I use to sell other people’s movies before, but I have stopped it now.

Why, only your movies?

I sell quality movies, some people just rush to location and produce substandard movies, and they want you to sell it for them, I have stopped all that, it has negative effect on sales of movies. By God’s grace I have boys that goes out to sell for me, by God’s grace, they are doing so well.

What about online sales?

Yes, I go to people in charge, and sell to them, I am a supplier there.

What is the future ofthe movie industry in Nigeria?

The future is bright and okay, in as much, as we control through the right channels, everything will be fine and the industry will grow.

How I Hit Big In The Yoruba Movie Industry – ADEBISI OKUNNUGA was last modified: January 5th, 2019 by Reporter