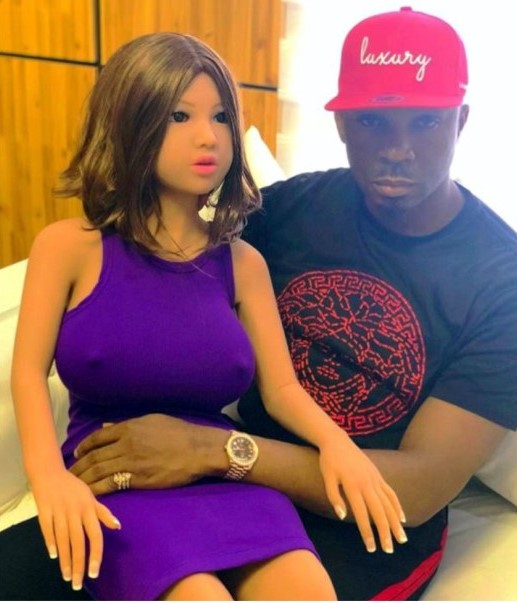 Pretty Mike of Lagos. but his real name is Mike EzeNwalie Nwogu. He is a popular Lagos big boy who loves to party. He is active on Instagram. He owns a night club formerly known as Q club. He is also into the transport business. He recently got signed by Martel as their brand ambassador. Pretty Mike spent most of his life in Texas where he studied Computer Engineering. He is popularly known for attending Lagos parties with an umbrella and also owns a sex doll he cares so much about. Pretty Mike named his doll Amaka Lagos. He got a house for her, takes her to the bathroom and showers with her, dresses her up in expensive clothes and takes her to his club to draw traffic and flaunt her on Instagram. In this interview with City People Entertainment Reporter, PRECIOUS POMAA, he shared a lot about his business and several other things.

Successful on IG?Hmm, since you put it that way, that’s fine. Most people that have known me for the past 13 to 14 years know I am a night club owner in Ikeja, which made me popular in terms of the nightlife. I have always been the type that does stuff my own way. I didn’t grow up in Nigeria. When I came back to Nigeria I tried to look for something to do just like every young man. I ventured into night club business even though I had no one I could look up to and say these are my followers. So I was forced to create a buzz for myself before started I have always tried to do things my way, create attention and draw traffic to myself and my business because that’s the basic.

So how does it feel being a club owner?

It has been a good business and it also has its ups and downs in terms of competition which is why I finally came to the Island to join my cousin, Obi Cubana in partnership with Cubana night club.  Martel just made me their brand ambassador, they signed me into a lot of money. I was so surprised I could never believe I would become a brand ambassador because I thought only could be brand ambassadors. But at that point when Martel signed me on which involves millions of naira, I knew it was not just about the nightlife but all my years of hustling have finally paid off.

You said you moved to the Island to partner with your cousin in Cubana night club, did you close down your club in Ikeja?

Oh, no, I didn’t, it’s still fully active, just that I changed the name from Club Q to Club Scandal. I have people in charge that give me reports from time to time. I am also involved in several other businesses, sometimes I just can’t fully concentrate on one particular location. For you to be very successful in Nigeria you have to be able to diversify and also have the right people in charge.

What are the challenges you’ve faced so far?

One of the major challenges is our economy, it is never stable. Sometimes it’s easy, sometimes it’s hard. But for the night club, people just want to come out and get high, eat and have fun but their pockets might not let them do as much as they would want to do. One thing I have learnt about our country is just that Nigeria is boring. We don’t have places we can go to during the day to have fun, that’s why most of us tend to go out at night to have fun and take away all the stress we’ve been through and get hold of some fun.

How bad has the economy affected your business?

Like I said, it is up and down.  I am a very spiritual person, anything I do I put it in the hands of God and I have a strong faith in Him too.

Wow, that’s a question I have never been asked and I try so much to shy away from it. I am a really private person and I rarely talk about my family in public and one of the reasons is because I am a very controversial person. Even as much as I try to keep them away from social media, most people still got to know little about me. I keep them away because I don’t want them to be part of what I do, my family understand that it is all about entertainment but by the time your mom gets over 500 missed calls about one particular thing, like I saw your son doing this and every other thing,  the whole thing becomes so annoying . Then, my educational background, I did all my schooling in Texas before I got back to Nigeria.

I was one of the lucky ones born with the biggest silver spoon but at the same time I have this confident spirit and I tend to do things in my own way. Even as successful as some people see me, my family will say, Mike, you’re not doing anything close to what we want you to do like the family business. But people look at me like, oh, my God, Mike, you’re so successful but my family see me like I am doing nothing good compared to if I had joined the Family business.

So what’s this family line of business?

Well, my father is into telecom business which he started in Nigeria and then took abroad. He is also into import and export, you know Igbo people, they do anything that brings money.

How do you cope with the female fans?

Well, female fans will always remain the females. We have the crazy, matured, and the bother line upsets. I have had my first share of female fans though it gets crazier by the day, I think the more I get popular the more I get more of them. Most of them even share nude pictures on my instagramdm for reasons best known to them, but you know what, I think it’s all part of the business and we need to go through them.

So let’s talk about your sex doll?

First of all, I will fight you for calling her a sex doll, she is no doll, she’s my friend and companion. Her name is Amaka Lagos. The thing about social media is no one respects anyone’s opinion and I think its high time they start doing that. For me, I got tired of dating our girls so I decided to get myself a companion and someone who understands me, which she fits into and Amaka Lagos’communication with me is divine.

So,Pretty Mike of Lagos, where do you see yourself years from now?

Well, I have a couple of projects I am working on for this year. I am planning a block buster moviein which I am featuring known faces and unknown faces especially the instagram celebrities which people have ignored because they don’t know how important they are. Please don’t quote me wrong, I am not moving into acting I just want to interpret Lagos in our eyes, not how the regular Nollywoodproducer sees it but how we the night club entertainers see Lagos .

Under the entertainment umbrella, what do you really do? Well, the word entertainment is really big, you don’t need to have a mic or be on screen to be called an entertainer. I own a night club, I entertain people too which is one reason I do most of the things I do on Instagram. I do things in my club that call people to my end. If I to post on my status tonight saying AmakaLagos will be live at the club, guess how many people will come out to see her and take pictures with her. I am really not like other club owners that just want to bore ballers with dancing and drinking then drive home. I attend Lagos parties with umbrellas people come around to take pictures under my umbrella, this has really brought traffic to my business and at the same time put cool money in my pocket.

READ ALSO: THIS ARE 5 NIGERIAN CELEBRITIES WHO WERE BORN RICH!

How I Fell In Love With My SEX Doll, AMAKA LAGOS was last modified: January 22nd, 2019 by Precious Pomaa

WHATS YOUR PICK! The 10 most anticipated albums in 2019