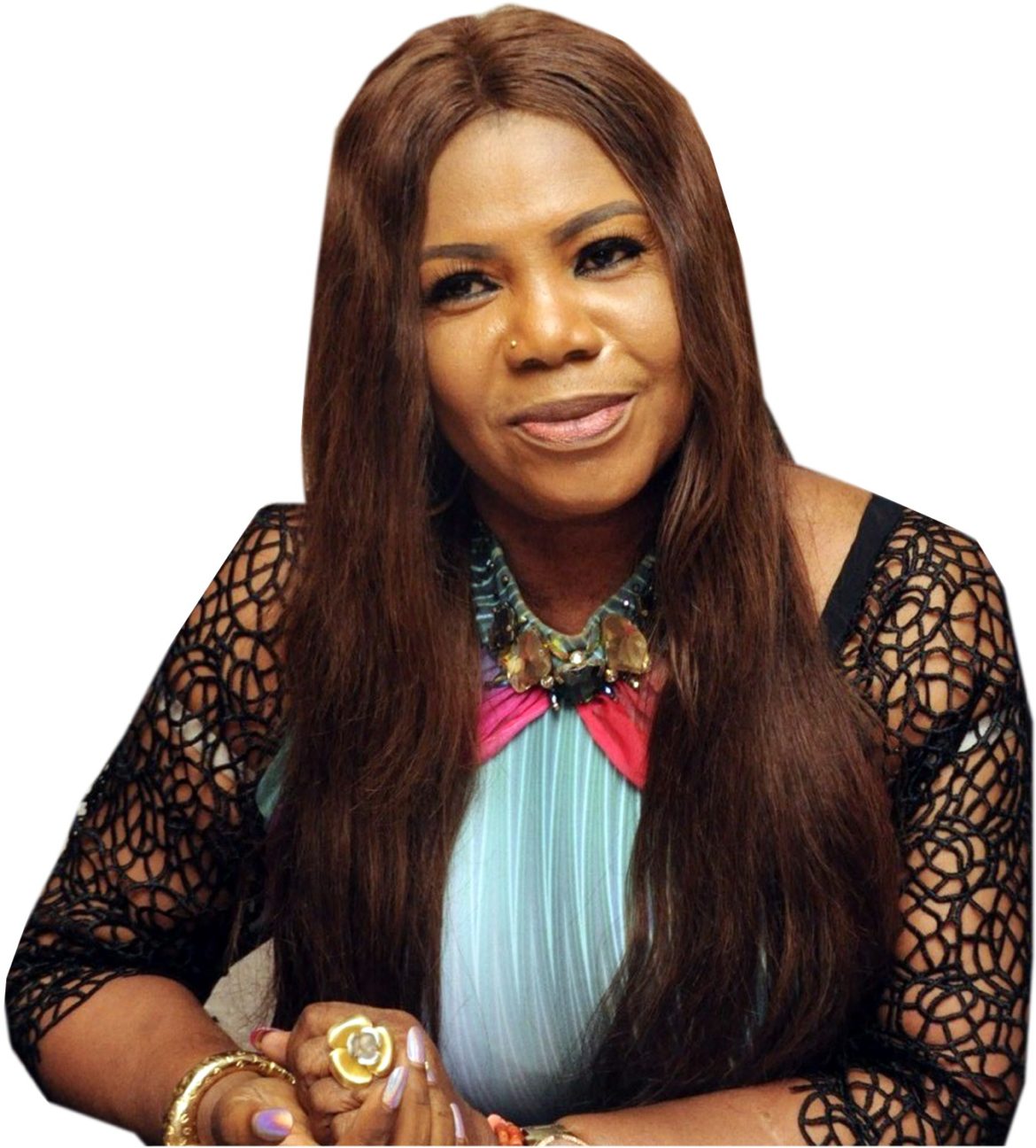 •Talks About Growing Up, Marriage & Business

When you talk about Ibadan society women who have  dominated Ibadan social scene for over 30 years, Alhaja Taofeekat Bolaji Babayemi’s name will pop up. She is not only beautiful but she also runs chains of successful businesses. Not only does she run one of the biggest wholesale Ankara shops in Gbagi, she has a popular Motor Battery brand called TAO Battery. She also runs a soap company called BJ Soap which is very popular in Ibadan. She is currently building a 202-room hostel inside University of Ibadan.

Just few years ago, she launched a 77-room luxury hotel called Palm 77 in Agodi GRA Ibadan. It is one of the biggest luxury hangouts where celebrities stay whenever they visit the ancient city. How did she get to acquire 1 acre and 1 plot land at that strategic location? What is the secret of her success? How is her love life like? How did she become that big? These and many more were the questions, City People Publisher, SEYE KEHINDE and Ass. Society Editor, ABIOLA ORISILE asked “Omo Iya Gbagi” in this exclusive interview. Below are the excerpts.

Recently you were made a Chief in Oke Ona by the Osinle. It made many people discover that you are not from Ibadan, but Abeokuta. What has been the reaction of people after finding out that you are from Oke-Ona Egba?

People didn’t know I was from Abeokuta, Oke-Ona Egba precisely so they were surprised. Aside this, I was also very happy that day I got the chieftaincy title. It was a memorable moment when they started singing “Awa ti ti omo oye”. I felt like it was my naming. Seeing the king, my elders and everybody gave me joy. I told myself, how would it would have been if my mum was alive to see this day? I felt she would have loved seeing that. I was happy to be the Osi Iyalode of a whole “Iyalode Alaba Lawson”. Being the Osi Iyalode of former Minister. I am young and blessed to be around this wonderful women. I give glory to God.

This is your 2nd chieftaincy can we talk about the first?

Well, the first was an honourary chieftaincy title. I am not from Ibadan but my God mother, late Iyalode Aminat Abiodun gave me the title of “Agba Akin Iyalode of Ibadanland.

There is no way we will talk about Ibadan society women and your name won’t pop up, how do you feel about this?

I look at myself as “Nobody”. I am just being gifted and blessed by almighty. So I can’t say what position I am because I think I am the last of Ibadan business women. I have many of my mothers who are doing so well in Ibadan. So when people look at me as a big businesswoman, I laugh because there are lots of other big Ibadan business woman. I am just being favoured.

You are one of Ibadan businesswomen but many don’t know how you started, what was your first job?

I was once an Air hostess before I went into business. I worked with Nigeria airways 32 years ago. I did that for 9 months. I left Nigeria Airways to join my mum’s business in old Gbagi market. Then only a few people sold lace fabrics. So, then my mother was into China Cotton. It was a good business and we had shops in Old Gbagi. My mum’s children were all supporting her at the shop despite the fact that she had small shops. They later moved us to New Gbagi and that was where all my mums children got Bigger Shops to themselves. It was this point that my mum gave me capital to start my business.

How much did you start your business with?

It was 25,000 (Twenty Five Thousand Naira) then 25,000 was huge money. Saudi Arabia trip was N12,500 and dollar was 1 to 2. I was in my 20s. That was how I started going abroad to buy Satin. Then, later to Saudi Arabia to buy “Yomi-Yomi”. Later when business died down at Saudi, we moved to Cotonou to buy because that was the only place to get the fabrics. It was a good market and we were making money. Then I started craving to go into bigger businesses.

So how much did you start your big business with?

You started bringing in Containers at Age 30, at what point did you move to another business?

It was when I saw that most wholesalers of fabrics started the business rivalry. I was young and I wanted more. I was just age 30 and I craved for more. I cut down on selling lace and went to China. My Agent then adviced me to do Ankara. It was inside the plane that I met a Chinese man who engaged me in a talk. We chatted and he told me he sells soaps. I went and started with BJ soap, which was my name . I also did candle but BJ soap was moving. Then one day, a close family friend told me to go into Battery. I started TAO Battery which I bought 2 containers and my battery went everywhere ‘I had lots of customers direct to Kano and it was moving so fast. It made good money and business was very good. Economy was good. So I have Tao Real Wax, BJ soap, Tao Battery.

Why did you go into Hospitality, what made you float palm 77?

That is a very long story. At one point in my life, I was duped of a big money. ‘I bought  the land of Palm 77 at age 27 years for 14.5 million naira. Today it costs many millions. “So when I was duped of many hundreds of millions, I wanted to use this site for hall (Event Centre) and club but I was advised that the papers won’t be signed. So someone advised me to build an hotel. I told him I don’t have such money to build an Hotel but he advised me to start small which I did.

That is how I started. I thought I was going to do a 20 rooms hotel, so I started from the back to make it just a storey or 2. So when I started the one at the back, I went to do the front but I didn’t stop my Ankara, Battery, and Soap business. I didn’t even remember we never had a kitchen, it was later that we built the kitchen. This Hotel has a gym, a beauty shop. And after that, business became better.

Is there anything you thought you should have done which you never did?

How many children does your mum have?

She has 6 children and I am the 4th child. We are all close to my mum while she was alive.

Why did you go into Real Estate?

I have never gone into Real Estate. I built my house for myself. Like the U.I Hostel is mine and I will use it for years.

Assuming you are not into fabrics, what would you have been doing?

I don’t know. Only God knows about destiny. My mum wanted me in the fabrics business because I was the youngest among the girls. My elder sister is in London and my elder sister, aunty Sumbo is also into fabric business in Lagos.

She is my mum. I have known her for many years and I love her so much. So also is Alhaja watergate, she is my first cousin.

What about your friend Alhaja Aishat Bolarinwa?

She is my friend and sister. We are both from Abeokuta and I love her.

I used to be married but I don’t want to discuss it further. God knows the best. Men hardly love women who are comfortable. I love my twins and I can’t joke with them.

I don’t rest. I resume here 8am everyday, despite being the CEO. I close by 9pm.

How many staff do you have?

How do you juggle the role of a mother with this stressful job?

My kids stay at the Hostel. They attend one of the best schools in Ibadan. They are always with me on weekends.

Do you see yourself taking a shot a marriage again?

Lets leave that to God. My kids are my husband.

Let’s talk about your fashion sense, at what point did you buy your first Gold?

I am “Omo-Iya Gbagi” our parents believe so much in decorating us with Gold. I have being wearing gold since I was a child. If you see “Omo Iya Gbagi, from old Gbagi, you will know that we love Gold a lot. When our mothers go to Saudi Arabia, they will buy us Gold.

What can you not be caught wearing?

I wear things I am comfortable in. On Sundays I wear my shorts and sneakers, but no matter what I wear, I am modest. I love to appear simple even if the cloth is worth millions.

Who a re your friends?

I don’t have friends but sisters.

What has brought you this far?

God first and my mum is 2nd.

What lessons have you learnt from your mum?

My mum “Iya Tirimisiyu” she is very quiet. She is from Egba. She always advised me to take things easy. She prayed for me 3 days before her death. We spoke at length. She died 3 days before my birthday, May 28.

How I Made My 1st Millions In My 20s – IBADAN Businesswoman, Hajia TAOFEEKAT BABAYEMI was last modified: June 11th, 2019 by Seye Kehinde