How I Met & Fell In Love With My Wife 35 Yrs Ago – Dr. ABAYOMI AJAYI, NORDICA Fertility Center Boss 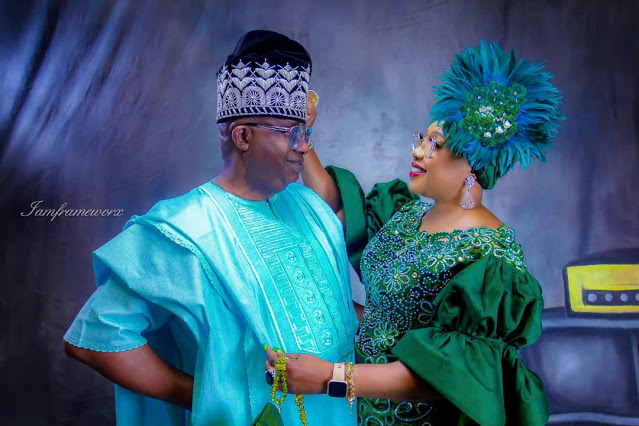 Dr Abayomi Ajayi is a popular fertility expert. He is also a Gynaecologist. He is the Chief Medical Director of Nordica Fertility Center in Lagos. He just clocked 60 last week and was celebrated by many notable individuals and families that he has impacted positively. He was also celebrated by City People Magazine.

Dr Abayomi is known to be a professional to the core. In a recent interview, he revealed his romantic side as a husband to the City People team led by the Publisher, Dr SEYE KEHINDE and DAMILARE SALAMI (08155134152) when they quizzed him about the areas of his life he hardly talks about. Below are excerpts from the interview, enjoy.

Tell us a little bit about you and madam. Hoe did you hit it off?

Laughs… Ok, it was during my youth corps in Ibadan exactly. You know boys must me boys, I was looking for a place where they won’t need doctors so that I could have time for my private practice outside the NYSC duties. So, I secured a place where I was going regularly and the man said if I could come in the morning, he would double my money and then I went to look for a nursing station where my service was not needed as such. So I went to BCOS clinic and I met this old man who said yeah, they want a doctor. I knew that my absence there won’t disturb as such so I joined them. The next time I got there, I met this beautiful girl and I said to myself, let’s come here then. So that was how it started but the only thing that happened was meeting her in that place because that almost made me do NYSC for two years. Though they posted me there but I had to run away because it caused a lot of problems. That was how we met… what happened was that I was looking for a house and she offered to help and then one thing led to the other and she’s been stuck to me ever since.

Hmmm… My son asked me the same question but I didn’t know how to answer but when I saw her, I just knew that was the woman I was going to marry. So, how? I still cannot explain but I think that’s how my own life has been. I just knew this was the woman I was going to marry but I had a very strong relationship before then so I just had to quickly end that and since then, it has been good.

How many years is that?

Don’t tell her sha… laughs. Seriously I don’t know but we seem to have a lot of things in common without realizing it but I think over time, it just happened that the two of us have the same outlook to life. Not in all parts though, she is the outgoing type but I am not.

How did you now find a balance?

When she does her own things, I let her be and when I do mine, she does the same. I mean, we just understood each other but we have lines that we will not cross. I think it’s just God because we make fun of each other sometimes… I’ll just say come, I hear a rumour that we are 32 years in marriage, how did it happen? I don’t talk so much but I’m not an easy person. I know that myself but she likes talking and all. I don’t know, things just worked out. Not that we don’t have our own issues, we do. The first seven years were particularly stormy because I was still seeing ‘awon boy’, we must go and out and all but after a while, I just started asking myself so many questions that what is all these? What are you looking for? The only thing you’ll get is trouble and so the children started coming in and you start telling yourself that there are some things you don’t want your children to see you do. I think we were just lucky and we have some very good friends who we can talk to when things are really very bad and we still do that even now. But the frequency has reduced very drastically because we are all old now.

Before we round off, I will like to ask this burning question in my heart. There have been issues with DNA recently because infidelity has been on the rise and all…

Cuts in… Infidelity has not been on the rise; it has been with us for so long. Let me tell you a story… I like DNA, I’ve had an interest in genetics for a while. Actually, I was supposed to do a course on DNA for doctors in Hong Kong last year but for COVID-19. I like genetics a lot because it is intriguing to me. The story I want to tell is that there was a documentary I saw about birds. There’s a particular bird, I’ve forgotten its name… the price for infidelity among those group of birds is that the male will kill the female if she has sex with another male; instant death, they know. They now did the DNA of the children of these group of birds, 40 percent did not belong to their fathers so, infidelity has been since time immemorial. I don’t think we can stop it, I think there’s something about human beings that is crazy. How can you have three children for a man and the three are not his own? And you wake up every morning to see that man and even call him darling? But it’s only a man that wants to kill himself that will be bothering himself with that now. What you don’t know does not kill you especially with DNA. I will not do any DNA for my children. Look, when I was in UCH Ibadan, there was a man, a professor whose daughter was in medical school and then she was ill. They saw that she was pale and all and she was on admission… finally, somebody did the genotype and found that she was SS. The professor is AA and his wife is AS so where did they get SS daughter? The man actually was weeping because he loves the girl. So, there are some things that are better left unknown. Another reason I don’t do DNA technology is this. One old man came to me one time when we were in VGC, he is late now. He said my son; you have to help me out and I asked what happened. He said I am a public figure, well known in society, I can take care of my bastard children but I cannot leave any inheritance for them. He wants to do DNA for his children and I said sir, I can’t do it not because it’s difficult but then, it means I have to be ready to be a witness in court which I don’t want to do. You know the best thing is not to look for trouble when trouble is not looking for you because whatever you give a woman, she will multiply for you. If anybody wants to do DNA, such a person is free but must be ready for the result. There’s another story of two doctors, one is the senior and the other junior. They are family friends too but the senior will always place his junior colleague on night duty not knowing that he was sleeping with his wife. Until one of their children became sick and they had to do DNA… this thing has always been with us. That’s one of the things that technology is helping us to see now. And I keep telling people that it’s going to become much easier as the days roll by because you don’t need blood anymore, I don’t need hair samples anymore. I can even make use of your used toothbrush and successfully conduct a DNA test. It’s becoming easier but I don’t like DNA.

READ ALSO: THE ATTACK ON MY LIFE MADE ME PERFORM BEYOND EXPECTATION – HON. TAJUDEEN AJIDE, CHAIRMAN SURULERE LG

How I Met & Fell In Love With My Wife 35 Yrs Ago – Dr. ABAYOMI AJAYI, NORDICA Fertility Center Boss was last modified: March 24th, 2021 by Damilare Salami

The Attack On My Life Made Me Perform Beyond Expectation – Hon. TAJUDEEN AJIDE, Chairman SURULERE LG

All Roads Lead To IDOGO This Thursday...