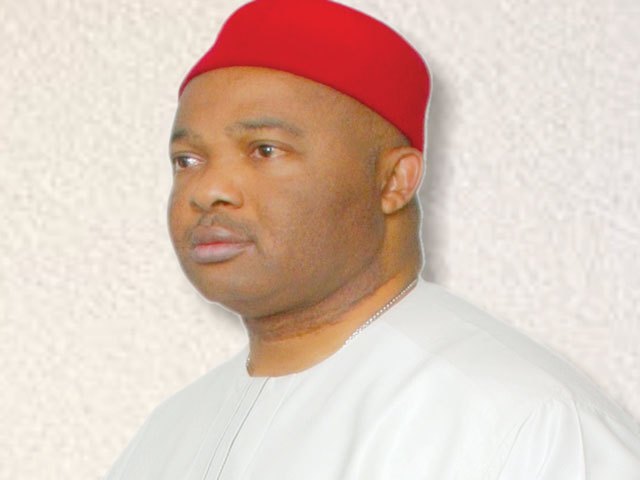 Aided by former President Goodluck Jonathan and former Transport Minister, Umar Idris, a company belonging to a Senator, Goodhope Uzodinma, hustled the Nigerian Ports Authority into a deal which saw it receive $12.5 million without competitive bidding and without delivering on the job, a government memo seen by PREMIUM TIMES says.
The company, Niger Global Engineering and Technical Company Limited, and the NPA entered into a partnership in October 2014 for the management of Calabar access channel, one of the nation’s key waterways.
The pact followed a presidential approval, which ignored technical advice and overruled required procurement procedure. Mr. Jonathan’s approvals followed recommendations by the transport minister, Mr. Idris.
On May 18, 2015, just before Mr. Jonathan left office, the director-general of the Bureau of Public Procurement told the president that awarding the contract, worth N26 billion in all, to a company that failed or refused to bid for the contract, amounted to “gross violation of due process”.
Insiders in Nigeria’s maritime industry describe the contract as phony, saying it might have been concocted to raise funds for PDP campaign in 2015.
But the BPP suggested Mr. Jonathan might have been misled by Mr. Idris and the former president’s chief of staff, Mike Oghiadomhe.
“Your Excellency, I am of the humble view that you were not properly informed by the Hon. Minister of Transport’s letter …. And the subsequent brief to you on the matter by the Chief of Staff leading to your consequent directive….,” the DG of BPP at the time, Emeka Ezeh, wrote.
Mr. Jonathan initially directed the contract be given to Mr. Uzodinma’s company without competitive bidding. He later reversed that order after other competing companies protested. After Mr. Uzodinma’s firm went to court, the president restored the offer.

All three decisions were based on recommendations by the transport minister, Mr. Idris, a memo sent by the director general of the Nigerian Ports Authority, Hadiza Bala-Usman, to current transport minister, Chibuike Amaechi, said.
Innocent Ibirim, spokesperson for Mr. Idris, told PREMIUM TIMES that: “all the Minister did followed due process and was in the interest of the nation”.
“The Calabar dredging had to be carried out, and that’s what the minister did. The company had been on the project long before the minister came to office. No law was breached,” he said Thursday, after explaining the former minister was outside the country.
But details of the deal did not only violate the law, it returned no value for money. Part 6, Section 1 of Public Procurement Act demands that contracts such as the Calabar dredging must be awarded to contractors through competitive bidding.
No where in the law is the President of the republic or minister of transport granted overriding power to arbitrarily award contracts to handpicked firms in violation of the law.
Approvals and counter approvals
The NPA initially called for bids for the management of the access channels in Lagos, Calabar and Bonny in 2004. It later formed joint ventures, JVs, to establish Lagos Channel Management Company and Bonny Channel Management Company, and shelved the idea of a JV for Calabar channel management, following technical advice.
NPA’s technical consultant, Mobotek International Ltd, had, argued at the time that low ship traffic on the Calabar channel did not justify a JV, normally funded from ship dues, Ms. Bala-Usman said in the memo.
In June 2010, the ports authority initiated a fresh round of procurement for the Calabar channel, and received bids from six companies. At the time, BPP requested and secured presidential approval for use of selective tendering to “fast-track” the process in line with the law.
Yet, on September 13, 2012, while that process was continuing, the transport minister, Mr. Umar, sought Mr. Jonathan’s approval to cancel the procurement process and appoint a “special purpose vehicle known as Calabar Channel Management Limited” (CCM) as a JV belonging to Niger Global and the NPA to manage the Calabar channel.
Notwithstanding the fact that a procurement was ongoing, the minister’s request was approved by the president on November 6, 2012. Worse, CCM was yet to be incorporated at the time, BPP later said in its memo to the president.

The JV agreement between Niger Global and the NPA, was signed on July 25, 2013.
However, following petitions by the other companies, Mr. Jonathan authorised the revocation of the JV agreement between NPA and Mr. Uzodinma’s company. The president gave approval for a restarting of the procurement process for the dredging of Calabar navigation channel.
Niger Global challenged the decision in court, arguing that the agreement was still valid.
Surprisingly, before the suit was heard, the transport minister, Mr. Umar, on August 11, 2014, conveyed to the NPA an approval of the former president referenced PRES/99/MT190, dated August 8, 2014, to cancel the second procurement exercise, and re-award the Calabar contract to Mr. Uzodinma’s company, Niger Global without competitive bidding.
With the second cancellation, Mr. Umar directed NPA to prepare for the take-off of the CCM and ensure a second JV agreement with Niger Global in October, 2014.
Subsequently, the project vehicle of Niger Global, CCM, submitted invoices for the fourth quarter 2014 and first quarter 2015, totaling $34.56 million, and the government paid $12.5 million before further payment was suspended.
The suspension of further payment, Ms. Bala-Usman told Mr. Amaechi in an April 19, 2017 memo, was due to an investigation being carried out by the Economic and Financial Crimes Commission over suspicion the company never embarked on any dredging exercise despite receiving pay.
Paid for nothing
After NPA suspended payment, Niger Global petitioned Mr. Amaechi, pressing for more money and the continued existence of the joint venture, CCM.
But in her response, Mrs. Bala-Usman said: “all efforts to find details of dredging activities for the period during which CCM claimed to have dredged Calabar Access Channel (November 2014 to January 2015) proved abortive.
“The Harbour Master and Port Hydrographer during the period stated they were unaware of any dredging undertaken by CCM during the period. Further, there was no communication between the company and the Port Management on their purported dredging activities during the period.”

Timeline of movement of CCM’s dredging equipment
– October 16, 2014: Dredger MV Atlantico Due arrived Calabar, berthed at Intels Terminal for flag-off ceremony and left October 18, 2014 after the ceremony.
– November 12, 2014: a survey boat MV Hurricane arrived Calabar, anchored mid-stream and left without recourse to the Port Management.
– November 19, 2014: MV Waterway arrived Calabar and disappeared without any recourse to Calabar Port Control/Management and without applying or obtaining the requisite sailing clearance till date, there is no communication on where about of the dredger.
– August 29, 2015: Dredger MV Atlantico Due arrived Calabar Fairway Buoy but was not allowed for security reasons pending completion of necessary documentation.
– September 1, 2015: MV Hurricane arrived Calabar without documentation and the vessel left without responding.
“The position above is corroborated by the report of the Management Committee on the review of Calabar Channel Management which states that ‘A comparison of pre and post dredging depths of the channel with a survey carried out six months before commencement of the dredging works revealed that the dredging of the affected areas of the channel was questionable’,” she told Mr.Amaechi.
Neither Mr. Uzodinma nor his company, Niger Global could be reached for comments on this report.
Niger Global has neither physical nor web address. A Lagos address purportedly belonging to the company turned out a sham.
Security guards there told PREMIUM TIMES there that Niger Global was not one of the organisations using the office spaces at the address.
Similarly, nothing came of efforts to get through to Mr. Uzodinma by phone, neither was he available when we visited his office. On one occasion, an aide in his office asked this newspaper to drop a note and phone number, which we did. But for more than two weeks no response came from the Senator.
A spokesperson to former President Jonathan, Ikechukwu Eze, did not also respond to phone calls and text messages.