How My Husband & I Courted For 7 Yrs Before Marriage 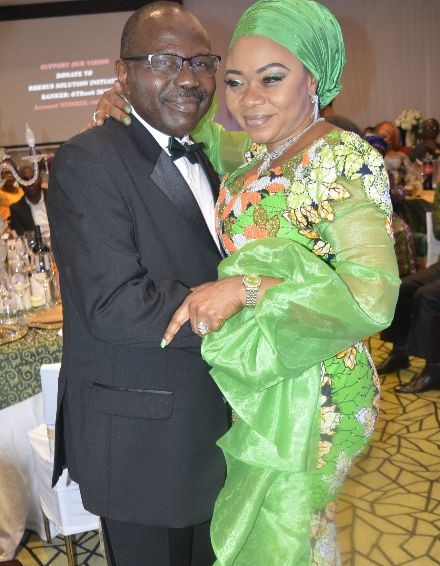 Dr. Muiz Banire (SAN) is a popular Lagos lawyer and a leading politician who until recently was the National Legal Adviser of the APC. He also served as Commissioner in Lagos State under Asiwaju Bola Tinubu and Mr. Babatunde Raji Fashola.

In May 2017, his wife, Funmilayo turned 50 and she spoke about her life as Dr. Muiz Banire’s wife. She spoke about how both of them have been able to make their 25-year-old marriage work. “It’s not been easy,” she explains. “It’s been by the grace of God. I attribute the success of my marriage to God. If I sit here telling you it’s easy, I will be lying. Everything comes with its challenges in life. It is to the glory of God. It’s because both of us are very, very close to the Almighty God. We’ve had our share of troubles. We had our share of smile, joy. And we thank God we have been 25 years in marriage now. I believe the worst is past”.

How did they meet? “We actually met through my half-brother. We had like 7 years courtship before we finally got married. He happens to be a friend to my half brother and then he used to come to our house at Ikorodu to celebrate Ileya festival. So, we just started like friends and the relationship blossomed before we knew it we hit it off. There was no formal proposal like they do now. We just found out that we were into each other. Before we knew it, he started introducing me as, My Fiancee to his family and friends. That is it. The rest is history”.

Where was she born? Where did she grow up? “I was born in Isale-Eko. We lived in Isale Eko till like 10 years. My mum played a very pivotal role by actually having foresight into what we could turn to be  if we were raised in Isale-eko. She quickly moved us to the mainland. We relocated to the mainland at Fadeyi in particular. I continued my school there, at St. Paul’s, having started my schooling at Ahmmadiyya Girls School, Olushi, on Lagos Island then. I went to St. Paul’s briefly before I was moved to the Boarding house at the Government College, Ketu.

My dad is from Ikorodu and my mum is from Agbowa Royal family in Ikorodu. My siblings and I grew up together before each and everyone of them started travelling and relocating abroad”. Where did she work after she left school? “When I left Government College, Ketu I proceeded for my OND at The Polytechnic, Ibadan. From there, I served at National Bank.  I later went back for my HND at Yaba College of Technology and later on, I proceeded to do my Master’s degree I did Msc, Personnel Management, I did MBA at the then Ondo State University and LASU. I did a Master’s after I have been married. I worked with National Bank briefly and I returned there after my HND. I still worked there for sometime before I now transferred to Dunlop Meyer Plc as Personnel Manager (Head of Personnel) that was after I had my first child, having waited for 5 years in marriage. After I conceived and after my maternity leave, I decided to stay with my precious baby. So, I decided to resign voluntarily to be able to nurture my son.

So, from then, I decided to establish my business, even though while working, I had always had a passion for business. So, it’s been in the family. So, I started my business formally 21 years ago and to the glory of God, I have been able to diversify into other areas. I started with a Textile business and I have been able to diversify into so many other areas-property, haulage, importation.

READ ALSO: MEET THE 137 MEMBERS OF ASSOCIATION OF FRIENDS

How My Husband & I Courted For 7 Yrs Before Marriage was last modified: November 19th, 2018 by Seye Kehinde

Meet The 137 Members Of Association Of Friends