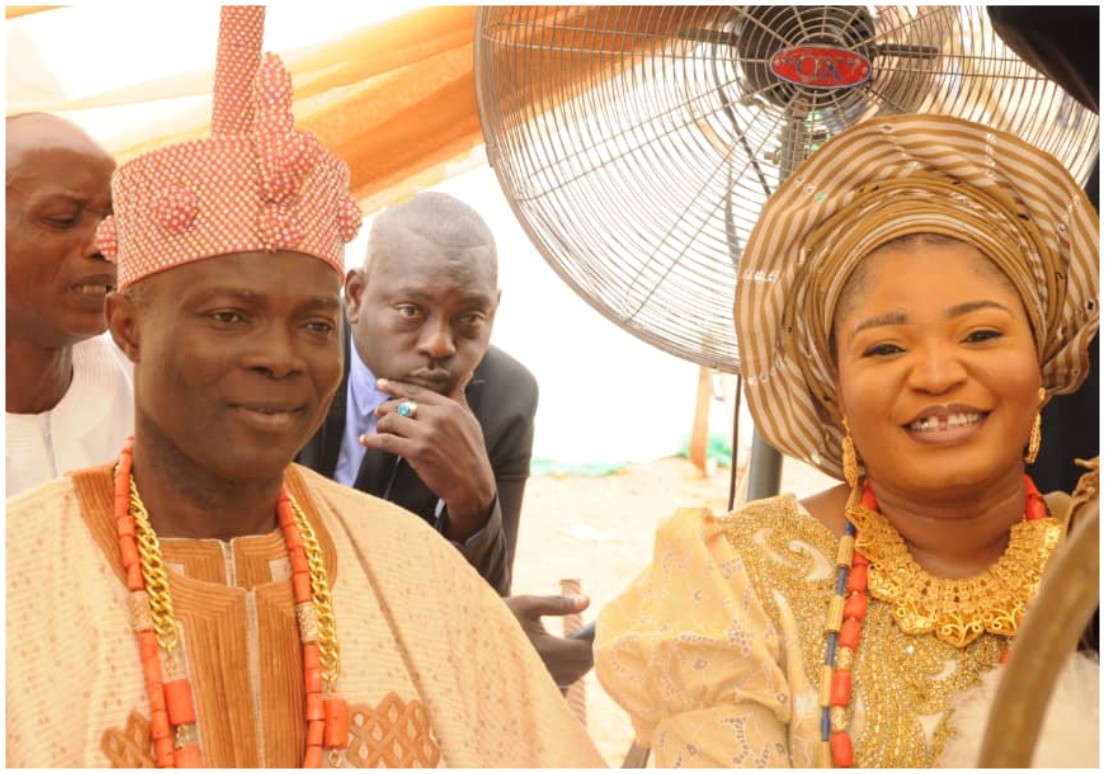 •As He Buries Mother-In-Law Alhaja IGBALAYE In Grand Style

Saturday 12th March 2022 was a day of reference in the ancient town of Osogbo, Osun State as the entire community stood still for His Royal Highness, Oba Hameed Adekunle Makama Oyelude, the Olowu of the Kuta Kingdom who held a classy and star-studded burial ceremony for his mother-in-law, Alhaja Musiliat Anike Igbalaye.

Oba Makama is a reputable first-class king of the great Owu Kuta Kingdom which is located between Ile Ogbo and Ede in Osun State. He is the permanent chairman of Owu kings and chiefs in Yoruba land. He is so influential and this played out during the celebration of life in honour of his mother-in-law. Osogbo received huge numbers of guests; among them are dignitaries, captains of industries, men of timbre and calibre not leaving out numerous women of substance. They were all in attendance to grace the event.

The party was well anchored by veteran broadcasters, Dele Tomori from Orisun FM and Adetoyese Shittu Alamu. All the dignitaries present at the event were properly recognized by the duo. Below are details from the classy burial party which became the talk of the town:

Alhaja Igbalaye as many do call her was a highly respected woman. She is the mother of Olori Fatimo Oyelude, the beautiful wife of the Olowu Kuta. Notable among her children are Honourable Kayode Igbalaye, Mrs Abiola and Mrs Posi. Alhaja Igbalaye was a woman of great virtues and a Muslimah to the core. Her immense contribution to Islam earned her the title of Aare Alasalatu of the Islahudeen Society of Nigeria, Osogbo branch. A position she occupied and cherished till her death. Alhaja Igbalaye died on the 28th of January, 2022 and her body had been committed into mother earth according to the Islamic rites. She was however survived by successful children, grandchildren among other family members. Indeed, every mother takes pride in seeing their children attain greatness in life. They become more fulfilled when their children take care of them at old age and by extension give them a befitting burial when they pass on. Alhaja Musiliat Yinka Anike Igbalaye would be a proud mother of her loving and caring children who did not only take care of her when she was alive but saw the need to celebrate their mother in death and above all, pray for her blessed soul after her departure.

HOW THE EVENT WENT

The party was held at the popular state-owned Technical College located opposite Vanguard Supermarket in Osogbo. Prior to the commencement of the grand reception party, reputable Islamic clerics held a Fidau prayer session for the deceased, seeking Allah’s mercy on her behalf. They also prayed for those she left behind that God should continue to uphold them.

By the time the prayer session was concluded, no time was spared as the stage was set for the party. Meanwhile, guests who came from far and near had started storming the venue, all well dressed and making their unique style statements. The arrival of guests was colourful and fun to see. Worthy of note was the arrival of top dignitaries such as that of an ally of Oba Makama, former Chief of Army Staff and Nigeria Ambassador to the Republic of Benin, Tukur Yusuf Buratai and his entourage; Former Governor of the state, Prince Olagunsoye Oyinlola; the incumbent governor, Gboyega Oyetola; the Ataoja of Osogbo; Kabiesi Oloffa; the Timi of Ede; the Ajalaye of Ipetu Ijesa and a long list of other royal fathers and many top celebrities.

Storming the venue of the event, Oba Makama drove in a white Range Rover Evoque, a classy Sport Utility Vehicle (SUV). His convoy was led by security aides dressed in suits. The Kabiesi himself is the epitome of fashion. Everything about him depicts royalty and that is who he is. At the point of his arrival, drummers and the Ewi chanters came around to welcome him to the burial ceremony of his loving mother-in-law, someone he never took for granted. Others also joined to welcome the king to the occasion. It was indeed a grand reception for him.

At about a few minutes past 2 pm, the executive governor of Osun State, His Excellency Isiaka Adegboyega Oyetola stormed the venue of the party. His arrival was greeted by all and sundry. They gave him a warm reception while he moved around the hall to exchange pleasantries with the royal fathers, celebrities and politicians seated. As he moves around, a resounding standing ovation was given him. The venue then turned to a political rally ground as many of his followers and party members began singing for him, thanking him for transforming Osun State and pledging to support him for his second term bid. The musician on stage, Professor Bola Bollington also helped amplify what the people were saying as he sang to praise the Governor.

The Olowu of Kuta Kingdom is highly influential and he’s friends to many top-placed personalities. His sphere of influence cuts across. In the Military circle, he had a smooth relationship with General Babangida. Also set of retired military personnel who the king loves and has respect a lot for is the retired Nigerian Army Lieutenant General, former Chief of Army Staff and Nigeria Ambassador to the Republic of Benin; Tukur Yusuf Buratai. They are long time friends. Kabiesi usually refers to him as his lifetime personal friend. The love between them is unrivalled. The relationship between the duo no doubt has benefited the Owu Kuta kingdom in many ways. The retired Chief of Army Staff gracefully attended the party. He was dressed in a white full Agbada. He did not only arrive on time, but he was also at the venue in the company of top Military Generals like Maj. Gen. Gold Chibuisi, Lieutenant-General Retired Lamidi Adeosun, Major General Iliya Abba, Brigadier General K.S. Suleiman, and Brigadier General Retired S.K. Usman. As a true friend of Oba Makama, he stayed for hours to dine and wine with the king before he left the party.

They were fully on the ground for Oba Makama and his brother-in-law, Hon. Teslim Igbalaye, a bonafide PDP member. They joined the occasion of the burial ceremony of Alhaja Musilimat Adeyinka Igbalaye and their presence added glamour to the party.

IT WAS A GATHERING OF THE OBAS

Many top and respected royal fathers stormed the party from various kingdoms across the state and its environs. They all turned up for Oba Makama. Most of them came in their full regalia showcasing class. Notable among them are the Ataoja of Osogbo, Oba Jimoh Olanipekun Oyetunji; the Ajalaye of Ipetu Ijesa Oba Adeleke Agunbiade Oke; the Oloffa of Offa, Oba Mufutau Gbadamosi; the Timi of Ede, Oba Munirudeen Adesola Lawal; Owaloko of Iloko; Alapomu; Kabiesi Sylon; Towulade; Gbegise; Oba Abule Owu; Oba Iboogun; the Olu of Ileogbo, the Onigegeof Gegeland; Oba Ifewara; the Olugbon of Igbn; Olufaki of Ifaki Ekiti; Oba Oloyan; Oba Alie; the Oniba of Iba Ekun; the Alaro of Aro; the Ogoga of Ikere; the Olorile of Orile Ifo; Oloto Awori; not leaving out the network of the king from Owu and their dignified chiefs. They stepped out in style and some of them here seen on stage with Oba Makama and his gorgeously dressed Olori Fatimo as they merry and danced to the melodious music played by Prof. Bola Bollington and his highly talented band.

Two different top musicians performed simultaneously on stage. Talented Fuji artist, Prof. Bola Bollington and his band took charge of the main stage while Juju music icon, Yinka Ayefele and his band were entertaining guests at the other end. On entering the venue, there is a stage mounted not too far from the gate. That’s where the Bollington band was stationed. He entertained royal fathers and other dignitaries who came to celebrate with Kabiesi Oba Makama. At the other end of the field, Yinka Ayefele was keeping his audience lively with his classy and timely Juju brand of music. Both stages were lively as the hosts and dignitaries rocked the party and had fun. The party really had moments of great fun that many people would relish for a long.

THE STAGE WAS DESIGNED WITH OBESERE’S POSTER

Not until when Professor Bola Bollington mounted the stage to perform, did members of the crowd were anxiously waiting to witness the arrival of the Fuji sensation, Abass Obesere. Even after the Professor’s band was on, they were still waiting for Obesere to storm the party. It’s an open secret that Oba Makama is an ardent fan of Abass Akande Obesere aka Omo Rapala. Kabiesi doesn’t joke with the popular musician. Even in the absence of the music sensation, the main stage still has the poster of Obesere, the Agbakin Bobagunwa of Yoruba land. Many people at the event made lots of references and testified to the love Oba Makama has for the musician. Many said Obesere’s absence at the ceremony must have been for a very vital reason, if not, he would have graced the occasion and mounted the stage to perform for his man.

OVER 20 CATERERS WERE ON DUTY

Varieties of Foods and drinks, as well as snacks, were served based on request. They are provided at the beck and call of the guests as over 20 Catering services were strategically stationed at different locations to cater to the demand of guests. These caterers are top and highly sought after in Owambes of today. They understand the business of the day and they carried out their task diligently. They made snacks, foods and drinks available for the massive guests and made their host proud. Notable among the caterers are JS Catering, Riches BBQ & Shawarma, Ciro1 Events & Catering, Richbeth Drinks, Designer’s Kitchen; Bluetooth Catering and Event, Beccadex Aladun, Best Bargain, Ojolowo Catherine Service, Lachopy, Opemipo Barbeque, Macaregrills, Stomach Affairs, MM Kitchen (Mafadmoh Kitchen), Justgrills, His Praise, Ayoropo, Just Sweet Cakes & Pastries.