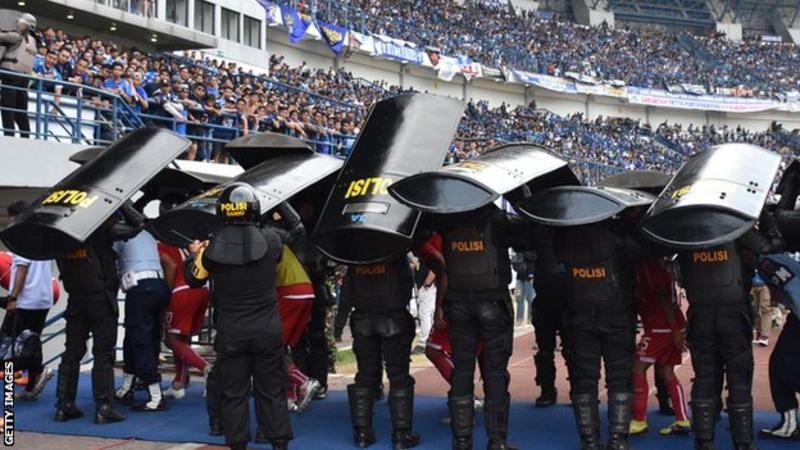 The Indonesian FA has suspended its top football league after a fan died at a match between rival teams.

Persija Jakarta fan Haringga Sirla, 23, died during clashes with Persib Bandung supporters outside the ground in Bandung on Sunday.

Indonesia’s Minister of Sport, Imam Nahrawi, has now announced Liga 1 will be suspended for two weeks.

But that suspension may be lifted sooner if the “problem can be solved” following an investigation.

The Sports Ministry’s spokesman, Gatot S Dewa Broto, said: “We are still gathering facts and pieces of evidence, which later will be analysed by the ministry’s Discipline Committee. They will see what rule has been broken.

“If this problem can be solved in a week, the football league can be resumed. We hope this problem solving won’t take too long.

“In the coming days, the Discipline Committee will hold its meeting and after that, there will be a decision.”

Sunday’s incident was the seventh death of a fan due to match-related violence in Indonesia since 2012, according to football watchdog Save Our Soccer.

Sixteen people have been arrested in connection with Sirla’s death.

FIFA banned Indonesia from international competition in 2014 following a row with the Indonesian FA but it was lifted two years later.

Indonesia hosted last month’s Asian Games and the country said it will bid to host the 2032 Olympic Games.