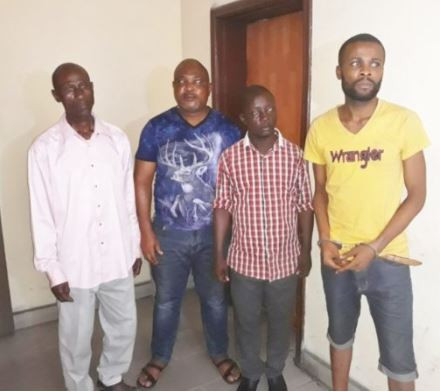 Another man identified as Darlington Ogolo was also arraigned alongside the INEC officials. Ifiesimama and Sorle were accused of attempting to steal 3,097 Permanent Voter Cards (PVCs) and selling them to Ogolo, whose identity was still under investigation.

Ogolo, on his part, was accused of bribing Ifiesimama and Sorle with sum of N300,000 and N120,000 respectively as payment for the PVCs. The accused persons are facing eight counts charge of conspiracy, bribery, theft and fraud in suit number PHC/313C/19.

Mr Calistus Eze,the Prosecuting Counsel said the accused persons allegedly committed the offences between May and August 2018. He said their acts contravened Sections 98 (4) (1) and Section (A) (1) of the Criminal Code Law of Rivers state. He said that the offence also violated Section 120 (1) (d) and Section 117 (1) (e) of the Electoral Act 2010.

Chief Magistrate S.D. Andrew-Jaja, however, admitted the three accused persons to bail in the sum of N100, 000 each with a surety each in same amount.  Andrew-Jaja ordered that the sureties must be Civil Servants on not less than Grade Level 12 in Rivers State Civil Service. He thereafter adjoined the matter until Feb. 20, for hearing. In another development, the DSS arraigned one Philemon Lawrence, 25, who allegedly paraded himself as INEC official.

Lawrence was accused of defrauding unsuspecting members of the public after promising his victims jobs as INEC ad hoc staff. The DSS alleged that the accused person collected N3, 800 each from members of the public after advertising his bank account online. He was handed a three counts charge bordering on conspiracy, impersonation and fraud.  Andrew-Jaja also admitted him to bail in the sum of N300, 000 with surety in like sum. The chief magistrate adjourned the case until Feb. 19, for further hearing