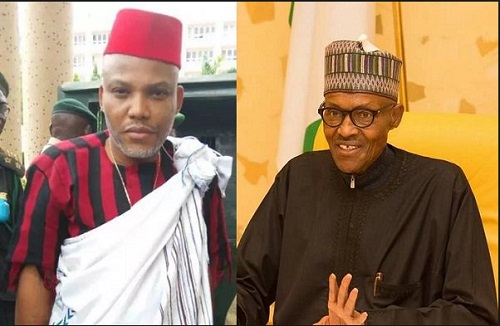 Abaribe had earlier approached the court to discharge him as a surety of Nnamdi Kanu.
But the court has given him three options: one, produce Kanu in court and then apply to be discharged as a surety; two, forfeit his N100m bail bond; and three, request for more time to produce the IPOB leader.
Kanu is being prosecuted for alleged treason and is to appear before the court at its resumed sitting on Tuesday.
Abaribe was one of his sureties when he was released on bail in April.
He had asked for a discharge of the bond used for Kanu’s bail and a refund of N100 million paid to the court sequel to the bail.
Abaribe sought his relief on the ground that Kanu has been missing since soldiers of the Nigerian army raided his Abia residence.
“Since the aforestated visit of the Nigerian army to the residence of the first defendant from September 11, 2017, the second respondent in this suit has not been seen again nor reached on phone the applicant neither is he reported in any news media as seen by any person nor made any statement on any issue,” the senator said in his application.
“The activities of the Nigerian army as affecting the first respondent are matters of state secret incapable of being unravelled by the applicant which activities has put the second respondent out of the reach of the applicant such that the applicant cannot reasonably be expected to produce the second respondent before this court at any subsequent date.
“The applicant lacks capacity to produce a person stated by the first respondent to be a member of a terrorist organization or any person who the first respondent is reported to be interested in his whereabouts in the aftermath of the military operation in Abia state.”
Kanu’s and his co-defendants — Benjamin Madubugwu, David Nwawuisi and Chidiebere Onwudiwe — are facing criminal charges bordering on treasonable felony, conspiracy, among others.