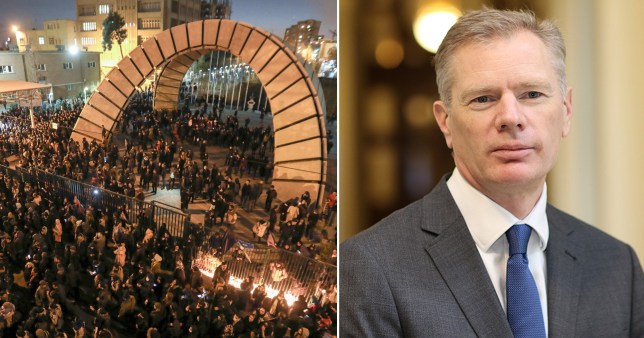 A large number of Iranian students and seminaries have gathered in front of the British embassy in Tehran, the country’s capital, demanding for the expulsion of UK ambassador, Robert Macaire.

The students are protesting the envoy’s participation and role in last night protest rallies.

Recall that Iranian authorities had on Saturday arrested and briefly detained Macaire for organising and provoking tens of protesters upset with government’s admission that its military fired down Ukrainian airliner killing 176 persons on board.

They also carried images of IRGC Qods Force Commander Lieutenant General Qassem Soleimani who was assassinated by the US in Iraq, and voiced strong support for the IRGC.

A senior Iranian legislator blasted Macaire for participating and promoting the protest rally, calling on him to end his interference in Iran’s internal affairs.

“The undue presence of the British ambassador in some gatherings is a flagrant interference in Iran’s affairs and it should be studied at the parliament, specially the National Security Commission,” Hossein Ali Haji Deligani said, addressing an open session of the parliament in Tehran on Sunday, according to Far News Agency.

“I call on the British envoy to end his interference and leave Iran before the Iranian nation forces him to leave,” he added.