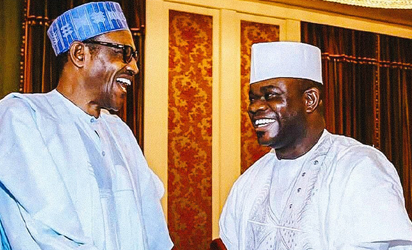 Three days to the governorship election in Kogi State, the Senate has approved promissory notes and bond issuance of N10.069 billion to the state as a refund for projects executed on behalf of the federal government.

The approval on Wednesday was criticised by opposition lawmakers who asked that the approval be delayed till after the election.

They were, however, outvoted by majority senators.

Kogi, like the Senate and the federal government, is controlled by the All Progressives Congress (APC).

The approval was a sequel to the adoption of the report of the Senate Committee on Local and Foreign Debts which considered the promissory note programme and bond issuance to settle inherited local debts and contractual obligations on the refund to state governments for projects executed on behalf of the federal government.

A promissory note is a debt instrument which one party promises in writing to pay a determinate sum of money to the other, either at a fixed or determinable future time, under specific terms.

President Muhammadu Buhari had on October 15 asked the Senate to approve the issuance of N10.069 billion promissory note to Kogi State government for projects done on behalf of the Federal Government.

He had said the 8th National Assembly passed the resolutions approving the issuance of promissory notes to 24 out of 25 state governments, leaving Kogi State.

The chairman of the committee Clifford Ordia, presented the report, asking the Senate to approve the amount requested having met with the permanent secretaries of the ministries of Finance and Works and Housing.

He said the committee also met with representatives from ministries of finance and works and Housing in Kogi State to consider the report.

Mr Ordia said the Kogi State Government conducted projects on seven federal roads and has paid all the contractors – hence the recommendation that the amount be approved.

“Based on our findings, some of the highways were in the state of disrepair before the intervention was carried out. The state government has paid all the contractors that constructed the road.

“Our humble recommendation is that the Senate does approve the refund of N10 billion for projects executed on behalf of the federal government,” he said.

Prior to the approval, the Senate Minority Leader, Enyinnaya Abaribe, kicked against the recommendation to approve the refund.

He noted that the timing for the approval is wrong as the state is expected to hold its governorship election on Saturday.

He asked that the approval of the money be delayed by one week.

“What I don’t want is the misuse of these funds because it is for the people of the Kogi State. This is not the right time, this is the time where the exigencies of the moment may be used.

“There is no harm in approving this money. Let the approval be delayed by just a week,” he said.

But the Senate President, Ahmad Lawan said the Senate’s approval of the refund is only coinciding with the election.

“Kogi State applied for this in the last Senate, all the other states were paid. Kogi was not approved at that time, we as a Senate has seen as a necessity and it is a coincidence,” he said.

Despite disagreement from some lawmakers in the chamber, Mr Lawan put the question to vote. The amount was eventually approved after a voice vote.

READ ALSO: WHERE WAS MY FATHER WHEN DANGOTE WAS MAKING MONEY? – TONTO DIKEH

Where Was My Father When Dangote Was Making Money? – Tonto Dikeh