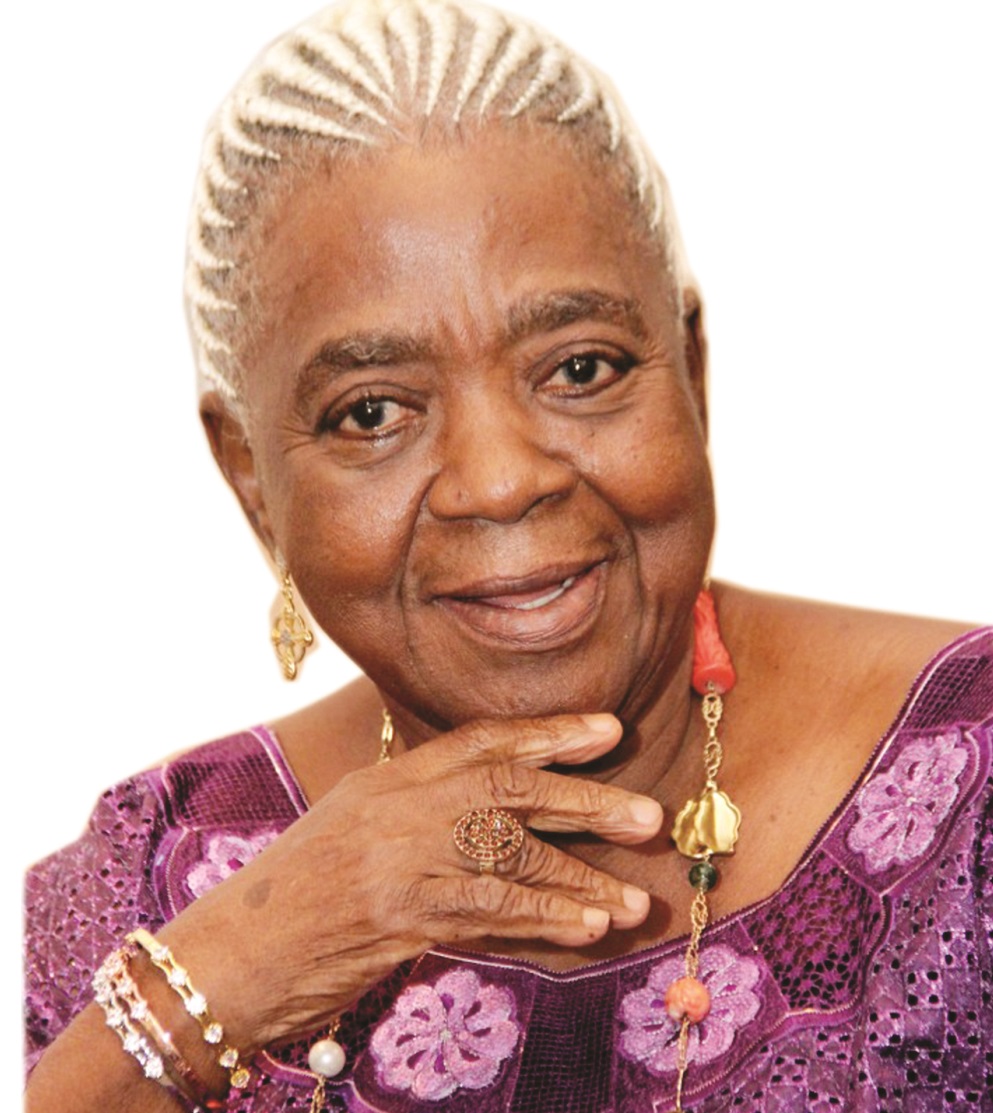 All roads led to the spacious Eventistry Event Centre on Freedom way in Lekki Phase 1 on Sunday 14th of May, 2017 as a Supreme Court’s Rtd Judge, Justice Olusola Oguntade, threw a classy 80th birthday party for his Mother-In-Law, Mrs Alexandria Motolani Adufe Haastrup, in grand style. The event, which was a baby-pink affair witnessed a huge turnout of prominent Nigerians, society women and CEOs of big firms, who all came out to show love to Mrs Modupe Oguntade. City People’s Assistant Society Editor, ABIOLA ORISILE was at the event to serve you hot gists.

MAMA MOTOLANI, LOOKS HALF HER AGE

At few minutes past 10am on Sunday 14th of May, Mrs Motolani Adufe walked into  theBreadfruit Church in Lagos looking regal in a flowing gold-double organza, which was sewed into a simple gown. Mama, who adorned her gold lace with a unique diamond set and a gold flat slippers looked half her age dazzling in her make-up. Many of the church members couldn’t take their eyes off Mrs Adufe as she was shinning as a star with her 2 daughters in attendance. The church thanksgiving lasted for over 2 hours before Mama left the church for the reception. She was centre of attraction as she danced with friends and well wishers. There was no doubt that Mama is a great dancer as she showed many dancing styles to the  guests.   Most guests couldn’t take their eyes off her while the event lasted, as there was no doubt that Mama is aging gracefully. Her special seat which was placed at the centre of the hall was a point of attraction. Many guests were seen paying homage to her as she sat calmly beside Alhaji Nurudeen Shita-Bey, who is an Uncle to Justice Oguntade’s wife, Modupe.

The celebrator’s eldest daughter, Mrs. Modupe Oguntade, couldn’t contain her joy at her Mum`s 80th birthday. Mrs Modupe, who runs one of the biggest International schools in Epe looked so pretty in a green specially designed sequin-double-organza lace, which was sewed into iro and buba with her matching signature Gele, which  was almost the same style with that of her mum. Though, she was in a joyous mood, but she couldn’t help it, at a point, she burst into tears while singing, “O seun tuntun laye mi ko dawo duro, anu ni mo ri gba` (God has done new things in my life and he has not stopped  His blessings on me). The song, no doubt, has a strong emotional meaning to her as she sang it whole heartedly. She was later joined by her husband, Rtd Justice Oguntade and their sons.

Do you know that Justice Oguntade`s wife, Modupe, has a look alike sister? Yes, she has a  younger sister, whose name is Olusola Haastrup. She joined her younger sister to give their Mother a classy 80th birthday party. Just as her elder sister, Mrs Modupe Oguintade, she is successful in her chosen profession, Olusola Haastrup is also a successful businesswoman in far away Texas in the United States. She was a cynosure of all eyes. Many almost mistook her for her elder sister. She came with many of her friends who flew in with her.

Justice Olusola Oguntade was a perfect host no doubt. The highly reserved Retired Justice looked good in a white-flowing Agbada matched with an army-green damask cap. Though, he left immediately after the church thanksgiving to commission a building at Idumota, but he later  joined his wife and his guests for the grand reception. Beaming with smile and   intermittently thanking guests, he was seen chatting with his friend and close ally, Chief Rasaki Akanni Okoya. As expected, he was fully on ground to give moral and financial support to the woman of his heart.

Undoubtedly, Mama Motolani Adufe Hasstrup is blessed. This newest member of  the octogenarian club in town was not only supported by her 2 daughters, all her grand children were also in attendance to make sure that their grandma had one of the biggest parties in Lagos. Jimi and Jola Aina looked sweet together, while Foluso and Jennifer were at their best. Ayodele and Wuraola Aina too were fully on ground to support their grandma. They gave a glowing homoge revealing that they hold Grandma Aduke in high esteem.

The Executive Governor of Lagos State, Governor Akinwunmi Ambode, couldn’t make the event, but he made sure his pretty wife, Mrs Bolanle Ambode, represented him. The Governor, adores and respects the Oguntades for who they are and what they stand for. She came in during the reception and spent over 2 hours at the event before she left.

One of the early callers at the event was Aare of Lagos, Chief Rasaki Akanni Okoya. The patriarch of Okoya family was fully on ground to show support to his long-time friend. Their friendship  dates back to many decades ago even before Juctice Oguntade joined the bench. This was revealed by Aare of Lagos himself in an interview sometime ago. He was in attendance with his wives, Alhaja Kuburat Okoya and Dr. Shade Okoya. He came with sophisticated coolers, which were shared freely to guests.

Dr. Shade Okoya is a fashion ‘Pro’. She surely knows how to spot one of the most exclusive fabric and lace in town. For the Oguntade’s event, she was a dressed in a white  chattily-fresh lace, which was sewed into a fitted blouse and iro, while she matched it with a unique diamond set. Many of the guests couldn’t take their eyes off the unique fabric, which caught attention. She came with a caterer and drink sever, who also served spicy  hot food to many of the guests.

APC’s chieftain, Alhaji Busura Alebiosu’s pretty wife, Alhaja Amudalat, was at the event. The pretty woman in her 70s was spotted sitting beside Alhaja Iyabo Martins Kuye, the wife of an Ijebu politican, Otunba Jubril Martins Kuye. Though, they are both in their 70s, but there was no doubt that they looked many years younger. Mrs Alebiosu came in early to the party, but she was later joined by her husband, Alhaji Busura Alebiosu, while Otunba Martins Kuye couldn’t make the event. Mrs Iyabo Martins Kuye really enjoyed the event as she danced to the sonorous voice of Ebenezer Obey’s music with her friend, Alhaja Amode.

Alhaja Fatimo Adegunwa, the pretty wife of Fototek’s boss, didn’t miss the party. The wife of Ijebu Billionaire, Chief Adegunwa, enjoyed the party for many hours with Oloori Kemi Adetona. The pretty wife of Awujale of Ijebu Ode.  They had a fun-filled time with Iyalaje of Ijebuland, Alhaja Fausat Korede Alatise, Oloori Adenugba and many others.

One of the Royal Fathers of the day was Oba Adedapo Tejuoso, the Osile Okena Egba in Abeokuta. He is one of the In-Laws of the Oguntades as one of Modupe Oguntade`s son, is married to Oba Tejuoso’s daughter. This is one of the reasons he came for the party with his 3 Olooris. A few minutes past 5pm, he left the party and for the first time left his Olooris at the party. It was the first time that Kabiyesi would leave an event without his Olooris.

Being a king comes with many responsibilities no doubt, and this is the case of a Lagos King, Oba Lateef Adams,Oba of Itire-Ikateland. He was spotted at Modupe Oguntade Mum`s birthday party last week with his wife and to say they  enjoyed every bit of royalty will be an understatement. This socialite turned King has mellowed  and changed his  antics of rocking Lagos parties to embacking on a more royal way, of doing things. He walked in with grace and only raised his royal horse-whip  to greet Ebenezer Obey as he seldom dances at party these days.

Taibat Okesanjo fondly called Montai needs little or no introduction in Lagos social scene. She is very popular because she has been rocking the scene for close to 2 decades. This pretty woman, who will turn 50 in the next few months, has changed her fashion sense completely. She now has this unique way of adorning her clothes at events these days. She has also modified her signature headgear, which also suits her baby face. When next you see her at a party, check her out and see the difference from the old Montai.

SOCIETY WOMEN WHO ARE FRIENDS

It was an array of Lagos celebrity friends on Sunday at the Oguntade`s party. Among  friends who partied together were Alhaja Mosun Masha and her friend Mrs Rasheedat Okoya, Alhaja Bisi Abiola and her long-time friend, Afusat Oshinusi. They even wore the same clothes. Mami Adeyemi, Wosilat Okoya, jumoke Oyeneyin, Sade Balogun, Emmanuela Essien and Sola Shasaya also partied hard.

The second appearance of Modupe Oguntade was a few minutes past 4pm when she stepped out in a never-seen-before white outfit with a touch of lemon net lace. This she sewed into fitted blouse and iro. Her designers should be credited for the way she transformed the fabric and  endorwed it with feathers. A few minutes to 5pm, she broke her rule, when she stood up to dance  to the music of Ebenezer Obey. She danced for several minutes singing along  Obey many of his hit songs. Those who know Modupe will tell you that she seldom dances at parties. She is a reserved woman, who guards her name jealously.

Though, many celebrities’ look caught  attention at the event, but guests couldn’t just help, but admire some other celebrities such as Chief Mrs. Wosilat Okoya, the younger sister of Lagos billionaire, Chief Rasak Okoya. We are talking about Mami Adeyemi and Jumoke Oyeneyin, who were  beauties to behold at the event. Jumoke, who is known for her unique signature gele made heads to turn to admire her baby-pink-lace matched with a unique jewellery set. So also was Mami Adeyemi, the bestfriend of Lola Adefusika and Maureen Onigbajo. She looked pretty in a black and Bay-pink-sequin lace.

In the last few weeks, Wosilat Okoya has been rocking Lagos social scene without her better half, Senator Demola Seriki and this is because her husband was out of town for a long vacation abroad. She was at the Oyinlola`s wedding and Shade Okoya`s birthday alone, but as you are reading this, her handsome husband is back in town and they both made an appearance together lastweek at Justice Oguntade  mother-in-law’s birthday. This celebrity couple sat closely together while the event lasted.

The 80th birthday of Mama Morolanbi Hastrup was well planned from conception to execution. The event was planned and decorated by one of the most sought-after event planning company in Lagos  Subtle Elegance. Bimbo, the lady behind the company looked sweet in her lovely Iro and Buba.  The event’s anchors were TEEA, MC Obama, while Ebenezer Obey was on the bandstand dishing out old school songs to guests. Aristos band also thrilled the guests with many oldies. Food and drinks were in surpluses quantity and it was served by competent hands in the industry.

How Women Can Detect If They Have CANCER! CROSS RIVER 1st Lady, Dr. LINDA AYADE