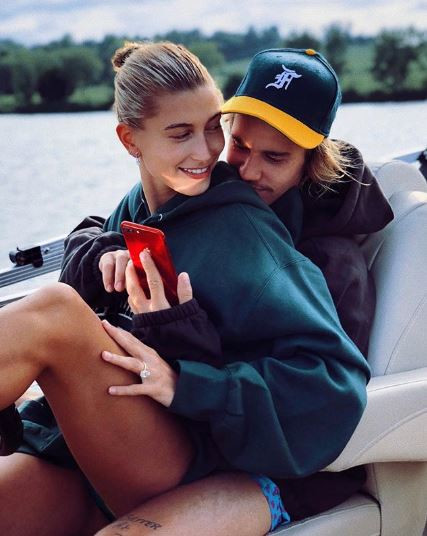 Justin Bieber and wifey, Hailey Bieber are reportedly set to get married for the second time but in the case, they will be walking down the aisle.

According to sources close to TMZ, the couple wants a more traditional wedding this time around where they will have a bunch of friends and family members in attendance.

The wedding is billed to take place in March 2019 which happens to be around Justin’s 25th birthday. Los Angeles is the choice location for the couple after they dumped the idea of using Canada which is where Bieber’s family reside in because of the bad weather.

Justin Bieber and Hailey Baldwin got engaged in 2018

A number of celebrities are billed to be attendance, including Kylie Jenner and Travis Scott who have both received an invitation card. The first time Justin Bieber and Hailey Balwin tied the knot in what is still a rumour, was back in September 2018.

The couple had visited a Marriage Bureau in New York City where they had a very private rite. Justin Bieber proposed to Hailey Baldwin in July 2018 during a vacation trip to the Bahamas.

In July 2018, Justin Bieber shocked the world when it was revealed that he hard proposed to his girlfriend,Hailey Baidwin According to TMZ, the singer popped the question at a Bahamas resort where family and friends were told to put down their photos so he could propose.

CNN and E! News confirmed reports of the engagement, which Bieber’s parents also appeared to celebrate online. Justin Bieber’s dad took to his Instagram page to announce the good news, saying he was happy about the latest move by his son.

“@justinbieber Proud is an understatement! Excited for the next chapter!” he wrote. TMZ reported Bieber and Baldwin appeared to have become involved again after Justin broke up with long-time girlfriend Selena Gomez. 1/1 Justin Bieber & Hailey Baldwin FINALLY Set A Date For Wedding Celebration After Selena’s IG Return! Source: Pulse Nigeria

Eyewitness? Submit your stories now via social or:

This is the full story of how MC Oluomo was stabbed with a poisoned knife at Lagos APC campaign rally Published 01/09/2019 8 dangerous mistakes you should never make during s3x Published 07/31/2018 Pulse Exclusive: MC Oluomo receiving treatment under heavy security Published Last Friday at 10:32 AM Adekunle Gold, Simi: Beach wedding next after traditional wedding party Published 01/10/2019 Lagos police arrest 16 suspects over APC rally violence, MC Oluomo recuperating Published 01/09/2019 ASUU explains why strike has not been suspended after its 7th meeting with government Published Last Friday at 10:28 AM Davido gets dismissed from NYSC programmeDavido has reportedly been dismissed from the National Youth Service Corps (NYSC) for breaking many rules during a 3-week orientation exercise in Lagos.Pulse Nigeriahttps://www.facebook.com/policies

Justin Bieber and Hailey Bieber set to tie the knot for the 2nd time was last modified: January 17th, 2019 by Igbokwe John

Why Music Act, TENIOLA & PERUZZI Are...