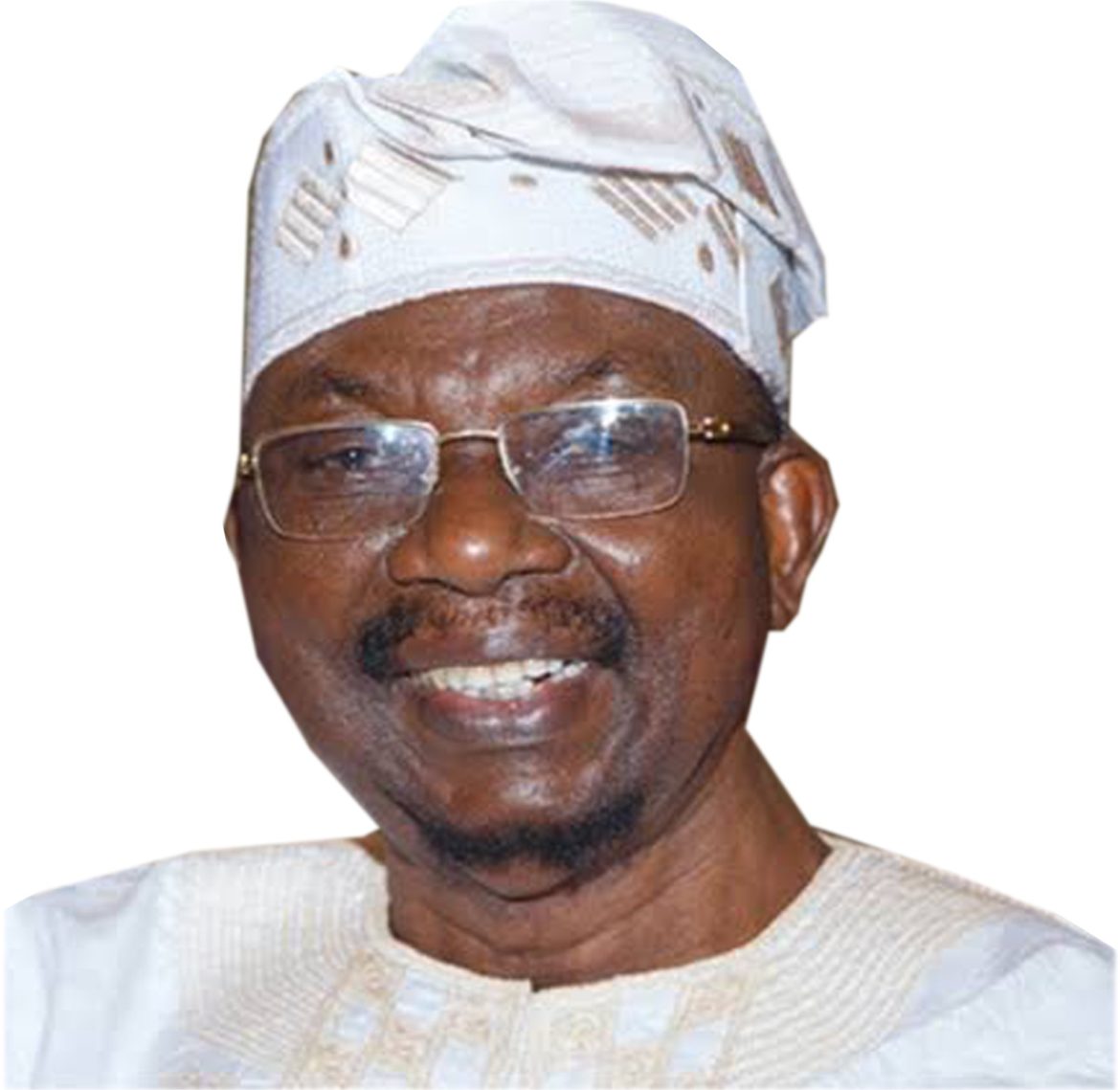 •What He Told City People Magazine About His Life

The sad news came a few days ago, as a respected politician, Senator Olabiyi Durojaiye passed on. What immediately came to mind was the image we still have of him, from the last time we met with him in Lagos. It was a very incisive and revealing interview that evening, 3 years ago. City People had gone to honour an interview appointment with this grand old man of politics at his expansive Opebi residence in Lagos, which he also uses as his office. He was a lawyer by training. He was also a top politician and Yoruba leader. Senator Biyi Durojaiye had turned 85 and he had written his Memoirs and City People was eager to have Papa talk to us about his life @ 85.

We were ushered into the Reception area of his Office wing inside the big mansion. He had a guest, we were told. And in a few minutes, he was done. We were pleasantly surprised when we saw the Ijebu Igbo born elder statesman in a simple shirt and shorts with a Kangor Cap to match, with no air around him. “Kehinde, please wait for me,” he said, “I will be with you in a few minutes.” Once he saw off his guest, Papa Durojaiye ushered us into his office that had bookshelves all around. “Welcome to my office,” he explained. “This is where I operate from”.

At that time he had a political appointment with the Buhari government. He was the Chairman of the National Communications Commission (NCC) and that took him to Abuja, weekly, to attend meetings. There were those who criticised him for taking up the job at 85. They felt a younger person would have been appropriate. This and many other issues were the questions we wanted to ask him. Why has Papa not slowed down at 85? Where does he derive his boundless energy from?

Let’s tell you more about this great man who passed on a few days ago. Late Senator Olabiyi Durojaiye was born on 8th February 1933 and died on 24th August 2021. He was elected Senator for the Ogun East constituency of Ogun State, Nigeria at the start of the Fourth Republic, running on the Alliance for Democracy (AD) platform. He took office on 29 May 1999. He also used the tribal title Otunba as a pre-nominal style, thereby highlighting his position as a chieftain of the Yoruba people.

Durojaiye earned a BSc (Economics) London, and an LLB, London. He was called to the Bar in 1979 and was a Barrister and Solicitor of the Supreme Court of Nigeria. He also graduated from the National Institute for Policy and Strategic Studies, Kuru. He worked for 35 years in the Nigerian public sector, including 28 years as a Director of the Central Bank of Nigeria and the National Mint. He worked with the International Monetary Fund, the Federal Reserve System in the U.S.A. and the City University London between 1964 and 1982. Durojaiye was an elected member of the 1988/89 Constituent Assembly.

In 1992 he was a candidate to run for President of Nigeria on the platform of the Social Democratic Party (SDP), losing to M.K.O. Abiola. Abiola’s subsequent election as president was quashed by General Ibrahim Babangida, leading to a return to military rule. In December 1996 Durojaiye was arrested by the military regime of General Sani Abacha and was imprisoned for 560 days and mistreated while in jail.

A June 1997 report stated the 63-year-old lawyer was reportedly in poor health and suffering from high blood pressure caused by his treatment. Amnesty International designated him a prisoner of conscience and campaigned for his release.

Durojaiye was an elected Senator of the Federal Republic of Nigeria (1999-2003). After taking his seat in the Senate he was appointed to committees on Judiciary, Establishment (Chairman) and Special Projects. In December 2002 he recommended a life jail term for anyone who perpetrated election fraud. He won the AD primaries to represent the party in the Ogun East constituency in the 2003 elections, although he was threatened with legal action by Chief Adamo Olayinka Yesufu, a rival for the nomination. In the event, the PDP candidate Tokunbo Ogunbanjo won the election. Senator Durojaiye’s wife Florence Olufunso Adejoke died on 6 June 2009, aged 72, in Ikeja, two months after she and her husband had marked their 50th wedding anniversary. She was survived by her husband, 6 children and many grandchildren. Last week, Senator Durojaiye died of Covid-19 in 2021.

What has kept him going all these years, we asked? “Well, I will say it is the Grace of God, that has kept me going. Everywhere I go, people ask this same question. I know I have extra reasons to thank God, because I still work far into the night, at times till 1 am or 2 am. At times, I don’t observe siesta and I am still able to keep on. This is not just ordinary energy, this is God’s gift. It’s not me alone. Look at Chief Olusegun Obasanjo. Though I may be older than him, but he has a much more busy schedule than I have. Look at Egbon, Ayo Adebanjo. He will soon be 90, he is still active. Papa C.O. Ogunbanjo, he is in his mid-90s. He is about 94 or 95 now. So, it is the gift of God. We have a few people like that. In addition, it is one thing to have the gift of God, it is another thing to appreciate not to abuse it. You must couple it with Spartan discipline, self-discipline. Avoid some excesses in many things, be it drinks, smoking. Then, have some little time for some exercises. In addition, one is blessed with some good genes, inherited genes. Like for example, my mother lived till nearly 92 and my father about 87. My senior brother is now 90 going to 91. Sometimes, some of these things could be hereditary. But overall, it is the Grace of God”.

When we met him that evening, at work he dressed down, looking simple, is that how he dresses to work normally? “When I come to work, I dress in a casual way. It’s only when I have ceremonial occasions to attend that I put on my traditional Agbada.  I am an Otunba of Ijebuland. When I am at work here, I just wear a shirt over shorts or trousers”.

What role does Contentment play in his life, we asked, because he always wears the look of contentment. “A lot, because it is contentment that will shield you away from the temptation of going astray or stealing money. You don’t consider a man honest until you put him in a position of temptation and he has refused to be tempted. Out of my 35 years of public service, I spent a total of 28 with the Central Bank of Nigeria, including the last 5 years of it working in the MINT. That is serious exposure to CASH, to real money. Out of those years, for 4 years I was Deputy Exchange Controller for this country, when FOREX had to be rationed, and people will come and try to entice you to give them some big ration and for you to have a cutback. You need to have God’s favour, strong will and determination to refuse. Those benefits are part of the position I am today. Because Mr. President spoke glowingly about me when someone was trying to introduce me to him at one occasion. They were introducing all political leaders of ACN to him during the burial of former Lagos Gov. Fashola’s father in Lagos. I never saw the  President, Buhari, as at that time for 30 years. So, someone was trying to introduce me and he said, Duro, needs no introduction to us. Can we forget him? This is the man who helped us to handle the change of colour of the currency of Nigeria with such EFFICIENCY & INTEGRITY 30 years ago. We can’t forget such a person.

Papa Olutola, the late Ogbeni of Ijebu once said if you are looking for money, but along the line, you meet with Honour. If you are a prudent man, you should just stop there. Stop chasing money, once you have Honour.

READ ALSO: WHY WE ATTEND ALL THE MAJOR PARTIES IN IBADAN – 4 IBADAN SPECIAL LADIES ON WHEELCHAIR