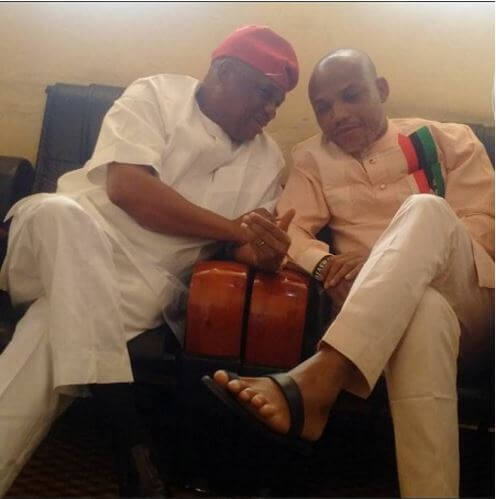 It appears that a former governor of Abia State, Orji Uzo Kalu who recently decamped to the All Progressives Congress played a pivotal role in the release of Biafra advocate, Nnamdi Kanu.

It is finally revealed that Dr Orji Uzo Kalu led the south-east APC leaders to negotiate the release of Nnamdi Kanu, the leader of the Independent People of Biafra.

It would be recalled that the politician stepped into the case of Kanu in December 2016 when he met with him in Kuje prison for a political solution.

In a congratulatory letter addressed to the former governor of Abia state, one of the counsels to Nnamdi Kanu, Francis Mgboh Esq thanked ex-gov Kalu for his role in negotiating the release of IPOB leader, with the presidency.

According to the letter, the APC chieftain led other APC leaders in the south-east to the presidency where the release of the IPOB leader was negotiated.

Barr Mgboh, therefore, appealed to Orji Kalu to also reach out for the release of other IPOB members who were denied bail by Justice Nyako.

The letter below is from IPOB lawyer, Francis Mgboh: Lawyer Thanks Orji Uzor Kalu for His Role in Nnamdi Kanu’s Release was last modified: May 3rd, 2017 by Arinze Ago