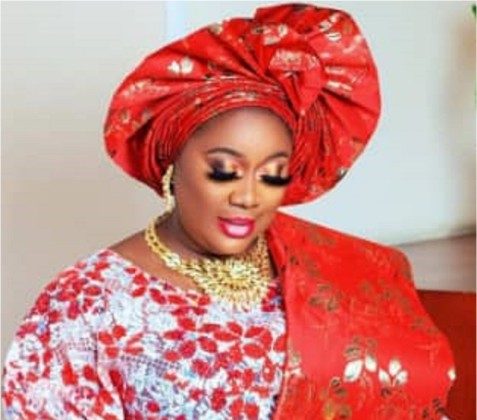 •As She Becomes Yeye Mesho Of OWO

The event which was historical in the history of the town made the ancient city come alive for many hours because of the caliber of people who stormed the city for the Ologans and many other new titleholders. The event was not about Dolapo Ologan alone, another London celebrity couple, Mr Adeshola Adegoroye (Bune) his pretty wife, Iyabode Adejoke Adegoroye also flew in from the UK to become the Yeye Fiwagboye and Chief Fiwagboye of Owo Land.

The event wasn’t only felt in Owo, many celebrities flew to Akure before the awaiting Chauffeur later took them to Owo for a 40 minutes drive and the experience was amazing for many of the guests. Of course, all the celebrants were in Owo few days before the title to get acquainted with their dear town before taking their titles. Though they are based abroad, there is no doubt that they haven’t forgotten their roots for a second. Speaking in their language with smiles on their faces, they received visitors who came to felicitate with them before the d-day.

The high point of the event was when the new Oloyes stepped out for their new titles. As expected, Dolapo Ologan whom many London celebrities always admire her fashion sense dazzled at the event. Since many received the news of her new title, encomium has been coming in while many looked forward to seeing what she would rock. Many Gold merchants who she bought jewelry were seriously awaiting her look.

Did she disappoint them? The answer is No. She stole the show as usual in her timeless Collection of Jewelry. She rocked 1000 grams gold on 4 outfits. Did you say that was huge? It was befitting of her new title of “Yeye Mesho”. She was first spotted in a Caribean White Gown matched with a heavy set of “Moti” (Clip earings) which comes with a bangle and a big ring. This was worth many Grams.

Her 2nd look was a luxury white Iro and Buba lace from “royaltiesexclusive” matched with a unique huge rock Mother of all Gold “Ogelewa” Gold worth over 200gramms. What about her 3rd outfit? It was a baby pink monotone luxury lace matched with a huge hand Jewelry of 367grams from Ogelewa. This set many tongues wagging because of the beauty of the timeless piece.

While guests were still busy admiring this look, Dolapo shocked many when she changed again into a red and white luxury lace matched with a Specially handcrafted 18carat from Mercy Rabiu. In fact, Mercy didn’t post the grams, however, she has something to say about Dolapo’s Fashion sense which she said can’t be compared to any. Her words “#repost @mercyrabiu_the_jeweller.

“First of all I would like to thank Almighty God for making this day and beyond a success.

This is just the perfect title for her, trust me.

The type of “ESHO” she’s got …… story for another day @dolapoologan is one of the few people that when they approach you for jewellery u have to go searching and drawing and once you conclude the kind of alert that follows bank manager must call u.

This is because they have seen it all and they own a lot of different pieces in the Vault.

Thanks so much for making us part of this occasion and also thanks to the beautiful Aunties u have got, nothing is taken for granted. I am genuinely grateful.

Trust me babes, you actually do have the charisma and personality for that title

Congratulations my YEYE MESHO of OWOLAND “ she said. Her Red Chantilly HOH was supplied by @royaltiesexclusive while her well-pedicured legs were adorned with luxury

How can she rock Jewelry of 1000 grams if a gram of gold that is not handcrafted costs about 30 thousand Naira per gram? Well, Dolapo Ologan is one of the Nigerians making us proud in London. She is happily married to a successful businessman who loves her to the bone. They have been married for years and her hubby is also well loaded. Sighting her hubby from afar you could tell he is rich. His skin, look, jewelry and all will tell you he is no small fry. Dolapo is also rich too.

When asked how she felt when she was bestowed with a title as big as Yeye Mesho of Owoland, she revealed that the first thing that came to her mind was “Which Jewelry will I wear?”. Her words “I was so excited when I received the call that I will be installed as Yeye Mesho 1 of Owo Kingdom. I was so happy and the first thing that came to my mind was, what would I wear?”

Speaking on what inspired her, she revealed that she has big aunties in London who influenced her with their fashion sense. They are Royalexclusivefabrics and Ogelewa. Whenever I see them I am always like, I will look like this at my next party. Don’t forget that Dolapo Ologan is a woman of many parts. She plays big in fashion, Real Estate to mention a few.