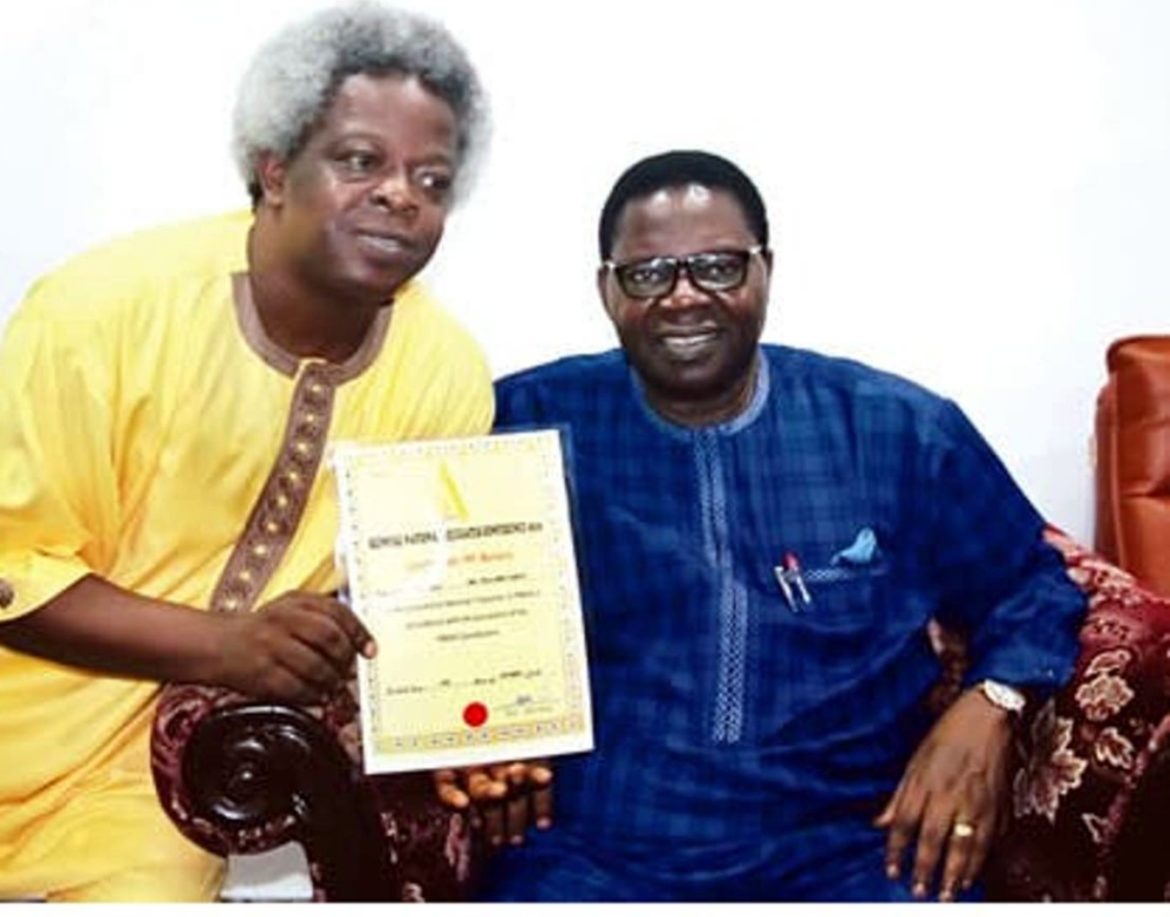 His name is Tolu Obey, the son of Juju music maestro, Chief Ebenezer Obey. The young and vibrant man, a few days ago, at Victoria Island, where City People Magazine held its 2020 Music Awards, revealed a lot about his father. He also revealed why he takes after his dad in many ways.

City People asked him how he feels, especially in the early days having a father who’s doing the same thing he does and how he has been coping with the fear of not failing his dad? These are some of his responses. “At the early stages, when I started rehearsals with the band and he came in, I forgot everything I wanted to sing even all of my assignments. Then as he was leaving the room he said to me. “Don’t worry, I understand” it’s with time that you would come out of it”. So, he would go and stay at the backstage. Once he leaves, I’ll start singing again. So, gradually, I grew out of that. So, right now, when I see him around me, I see him as an inspiration”.

How does he feels when people say he sings and sounds like his father? Does he has his own identity? “Well, every father of every home or household thanks God if he has a son to uphold his legacy. For me, I am happy to be a crown prince of Juju Miliki Empire and it is part of our culture to hand over every good profession to your son. My father didn’t even plan it this way.”

“Talking about identity, I have my own identity. My identity is Obey. You would never find an Elephant barking like a dog. And the gift God has given to me before coming to this world is what I have embraced, cherished and what I’m polishing to make everyone happy. So, my identity is Tolu Obey, the son of the Juju Maestro, Chief Commander Ebenizer Obey. Just like we have Femi Kuti, Ike Dairo and King Sunny Ade’s son also singing and the likes of their fathers”.

Whenever Obey plays, he plays for the high class and elites. Has his son been getting invitation from the same set of people? “Well, yes, when I was at Allen, the likes of Chief Bukola Ogunowo, SAN, and Bolaji Ayorinde and a host of others even Dele Momodu came to my show on his way back from London before going back to his hotel. I have been able to play for a lot of them and sometimes, I go to represent my father. And sometimes we do a duet on stage. So, I have a good relationship with these people”.

So, how affordable is he? Well, it is something I would let you know in the future.

For assessment as an insider and someone who understands music, he reveals some of the things that have sustained Chief Commander Ebeneser Obey till this point “I would say the number one factor is God. That has been my father’s source of power and what he has taught us. To read our Bible, obey Him and anything we do, Almighty God, will prosper it. Everything he is today, it’s as a result of grace he is enjoying from God.

“The second thing is that he enjoys what he does. He told me that it can only be God for him to be relevant until now. Apart from the fact that he is a very hard-working man who hardly sleeps. He reads his Bible, monitors his companies and all. He said to me, that rich and Wisemen monitor what they have at night because that is when it is more prone to destruction”.

He also cited some lessons he has learnt from his dad.

“ Humility is a major thing. My father respects everybody. He sometimes bends to greet me when he comes out of his living room and I would say daddy it’s me, he would say Tolu, how are you. This has happened several times. I looked at him with all the glory, fame, honour and riches that God has given him and he is this humble. Then who am I? Most of the things I enjoy today are because of him. He was the one God used for me. I don’t think I have any reason to be proud. No matter the person, you must respect everyone. He told me different stories of some people whose fathers or brothers are so rich and they are nobody. He would go there and greet them and at the end of the day, they become richer than their fathers, but if he had been rude or has looked down on them, they would also look down on him, so he said he enjoyed the relationship with everybody because of humility and respect”.

MMM No. 1 Guider,Chuddy Spotted With Hefty...