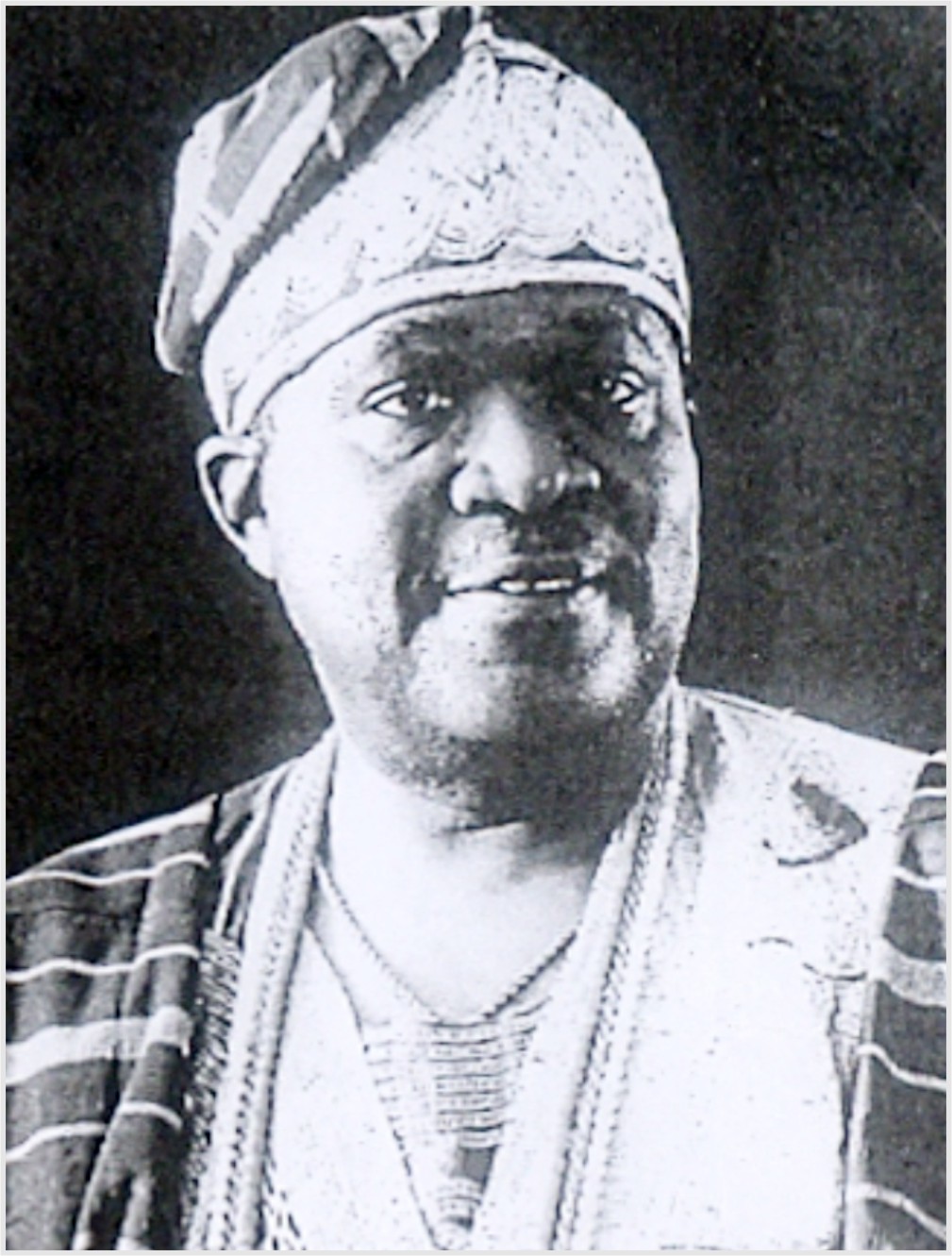 The Ashiru family is a big Ijebu family. It has produced so many illustrious sons doing so well in many fields of endeavour. Their father was so popular in his days as a foremost Tax Collector in Ijebuland.

Some of his sons are Awujale of Ijebu’s Otunbas. They are Prof. Oladapo Ashiru, the popular Gynaecologist & Obstetrics, Prof. Toyin Ashiru, the renowned Metallurgical Engineer and Otunba Bimbo Ashiru, Banker and former Ogun Commissioner.

Below are their stories.

Professor Oladapo Ashiru was born in Ogun ‘State, . to the illustrious Ashiru family. He had his primary education at Christ Church Porogun School, Ijebu Ode and Secondary education at Adeola Odutola College, Ijebu Ode and got the best graduating student award by the Principal in 1966. He proceeded to Ijebu Ode Grammar School for his Higher School Certification. He attended the College of Medicine, University of Lagos, graduating with distinction in Anatomy. His postgraduate training took place at the University of Nebraska Medical Center in Omaha. His area of research interest is mainly in the field of Reproductive Endocrinology and Assisted Reproductive Technology. He discovered and reported the follicle-stimulating hormone (FSH) positive feedback mechanism in 1979. This knowledge is used clinically in assisted conception technologies in the use of exogenous FSH injection in ovulation stimulation. He pioneered the technique of In-Vitro Fertilization and Embryo transfer in West Africa in 1983 (experimental), 1984 (human) co-pioneer of the first test-tube baby through IVF-ET in 1989 with Giwa-Osagie, ‘He improved the technique for sperm “insemination; and most recently, introduced the use of pre-implantation genetic diagnosis (pGD) and embryo selection to remove abnormalities like Down’s Syndrome, Sickle Cell and for family balancing, Prof Ashiru is the Chief Medical Director of the MART Group of Health services consisting of the Medical ART (Assisted Reproductive Technology) Center, the Mart Medicare (High-Risk Obstetrics and neonatal care) and the Mart Life Detox Clinic, the first modern Mayr Clinic in Africa.

Prof. Oluwatoyin Ashiru was born on 28 July 1954 into the illustrious Ashiru family of Ijebu Ode. His late father Pa Simeon Adeyemi Ashiru was a highly respected and revered Ijebu statesman. His late mother Alhaja Omo’ba Moradeun Ashiru hailed from the royal families of Fidipote in Ijebu-Ode and a ruling dynasty of Owu-Ijebu.

Prof. Toyin Ashiru is a distinguished Materials and Metallurgical Engineer with a career of about 40 years that spans through igeria, UK, USA, Canada, Saudi Arabia, Bahrain, Far East, and Asia. Toyin Ashiru has utilized IUs diverse experiences in the academia, consulting, finance/Investment entrepreneurship, and project management to provide technical advisory services for the enhancement of productivity in major oil and gas industries worldwide. He has served as expert consultant to NNPC, SHELL, CHEVRON, EXXONMOBIL, ADDAX, SAUDI ARMICO, SABlC, SAlVIAREC, QATAR OIL, etc. He has also served on various technology advancement committees of the UNIDO, UNESCO and the WORLD BANK

Prof. Ashiru had his primary education at the Baptist Primary School, Ereko, Ijebu Ode and secondary education at the Ijebu-Ode Grammar School. He is a graduate of the University of Sussex, Brighton, UK where he obtained B.Sc ill Materials Science and Engineering. He concluded his Ph.D at the University of Birmingham, UK in Industrial Metallurgy in 1983. He began his career as a lecturer in Mechanical Engineering at the Universities-of Lagos and Ibadan respectively before serving as-Nigerian Seruor Research Fellow at the International Tin Research Institute in the UK Toyin Ashiru before his advent into the oil and gas industries in 1998 was a professor/ senior research fellow at the King Fahd University of Petroleum and Minerals in Saudi Arabia.

Toyin Ashiru is the inventor of the first known instrument for Situ Detection of Steel Cracking in Sour Petroleum Production Operations. This sophisticated microprobe device is now fully commercialized and used worldwide in the oil industries. He holds patents in the USA, UK, Brazil, Japan. and of the World Intellectual Property Organization for several other inventions. He developed electroplated tin-zinc alloy coating system (USA Patent #5,378,346, January 3, 1995). The coatinz is extensively used worldwide, particularly in the USA, UK, Europe, and the Far East for the protection of plant, machinery, automobile, and aerospace components: He developed a comprehensive paint and coating standard and specification system. This one-of-the-kind package includes expert software systems for specifying of protective coating applications and preventive maintenance planning in industrial plants. Over the years, he has carried out many projects to solve corrosion and materials degradation problems in petrochemical, chemical processing, fertilizer, and steel manufacturing industries.

He is a world-recognized consultant on matters concerning Oil and Gas Plant Development, integrity enhancement and failure analysis. Of importance was his stint as a Technical Advisor to the Saudi Basic Industries Corporation (SABIC), where he developed several innovative solutions for petrochemical, chemical processing and fertilizer plants. He is responsible for the introduction of Sponge-Jet, an environment-friendly low-dust blasting technology to Nigerian industries.

Toyin Ashiru has received many merit awards and citations worldwide in recognition of his work, including an acknowledgment in the USA as a “Professional with Extraordinary Ability” and listings in Who is Who in the World and” the Dictionary of International Biography’.

Recently an award was constituted in his name at the Faculty of Science, University of Lagos. The Toyin Ashiru Award for Emerging STEM Enterprise is awarded annually for individuals who have developed their invenuons into commercially viable states. More recently, he was the

recipient of the Special Presidential Merit Award for Distinguished Engineering Practice of the Nigerian Society of Engineers (NSE).

Professor Ashiru has great passion for community service especially educational counseling for Nigerian youths. He sponsors and personally conducts programs on career development and effective study strategies for university students and keen parents. He has assisted many young Nigerians in obtaining placements and scholarships for postgraduate studies ill American, British, and Saudi Arabian universities. Most of the beneficiaries are now highly placed and successful professionals.

Prof. Ashiru is a Non-Executive Director of FCMB Group Plc. Chairman of CSL Stockbrokers Ltd and others. He is currently the Group Managing Director/CEO of Tricontinental Group, a first-rate Nigerian conglomerate with interests in Oil & Gas services, industrial technologies, industrial academy, properties and investments, energy and power.

He has been happily married to his “soul mate and chum” Adenike “nee 1980. They are blessed wirh children and grandchildren.

Otunba Birnbola Ashiru was born in Ijebu-Ode to the illustrious Ashiru family. His father, late Pa Simeon Adeyemi Ashiru was a distinguished Ijebu Statesman, while his mother Omo’ba (Princess) Moradeun Ashiru is from the Fidipote Royal Family of Ijebu-Ode and the ruling house of Owu-Ijebu.

He is well-read, graduating with a degree in Marketing, Purchasing & Supply, with a Masters’ Degree in Strategic Management. With this background, he entered the services of the then Chartered Bank in the year 1989. In a successful career that has spanned two decades and taken him to various institutions, he has served in various capacities of Management – as Head, Private Banking Unit; Branch Manager; Head, Institution & Professional Banking; Regional Coordinator; Country Director, Personal and Business Banking; Director, Corporate Affairs and Corporate Social Investments; until his last position of Group Head, Public Sector with Stanbic IBTC Bank. He was the pioneer head of the department.

Otunba Birnbola Ashiru is a man with a desire for developing people around him, and this translated into his appointment as the representative of the Awujale of Ijebuland on the Ijebu Development Initiative on Poverry Reduction (IDIPR). He has distinguished himself in this field and represented his people favorably to the best of his abiliry. He was also on the Technical and Communications Committees of the 17th Nigerian Economic Summit (2011).

He is a member of The Metropolitan Club, Ikoyi Club 1938 and a member of the Ijebu Heritage Group and Ijebu Renaissance Group. Otunba Ashiru is a Fellow of the Institute of Strategic Management of Nigeria; National Institute of Marketing of Nigeria [FNIMN] and Chartered Institute of Commerce of Nigeria.

In recognition of his selfless service to society and having distinguished himself as a true son of Ijebuland and an astute banker of repute, Otunba Bimbola Ashiru was presented with the royal title of Otunba Adeona Fusigboye of Ijebuland in December 2006 by His Royal Majesty, The Awujale and Paramount Ruler of Ijebuland, Oba (Dr.) Sikiru Kayode Adetona CFR.

He was the Honourable Commissioner for Commerce and Industry in Ogun State. A position he has held from 2011 and was re-appointed to the same ministry in 2015. Under his stewardship, the business environment of the state developed beyond imagination with over 1,279.84 increase in Internally Generated Revenue of the State. Over 300 factories/companies established their presence in Ogun State with a cumulative investment profile of about N691.77 Billion in 2014, compared to 377 Billion in 2013. This placed Ogun State in the first position in Nigeria, according to the Manufacturers. Association of Nigeria. During his time, approximately 75” of Manufacturing Foreign Direct Investment into the country between 2011-2016 came into Ogun State.

Also, during his tenure the World Bank Group, in its Doing Business in Nigeria 2014 Report, ranked Ogun State as one of the best five States in terms of ease of dorm; business against the 36th position in its 2010 report. He also facilitated the creation of a One-Stop-Shop Investment Center (OSSIC) which sits within the Ministry of Commerce & Industry to assist potential investors with procedures for investment and documentation processing.

Otunba Bimbola Ashiru is happily married to Olukemi Ashiru, a Lawyer. They are blessed with two lovely children.

READ ALSO: MEET 20 SUPERSTARS WHO ROCKED OUR SCREENS IN THE 90S