Meet Pastor ADEBOYE’s Son, LEKE Who Is His P.A 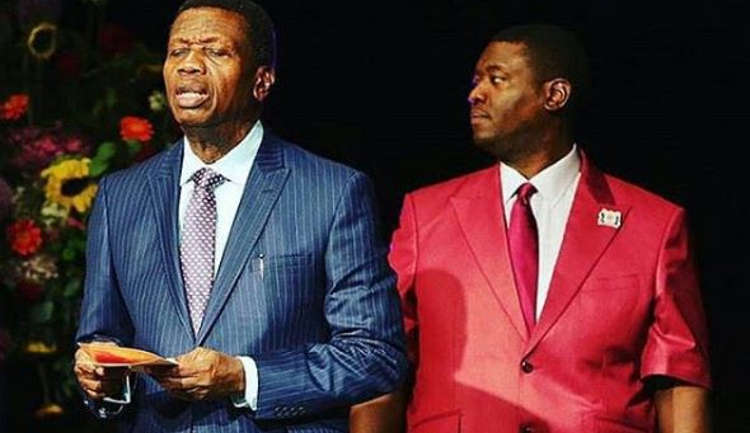 If there is any child of a popular Pastor in Nigeria who has constantly made news headline week in, week out, especially in the last few weeks, it’s no other person than the Redeemed Christian Church of God General Overseer, Pastor Enoch Adeboye last son, Leke. He is just 38 years old but he has grown to become an integral part of his father dynasty.

A weeks days back, the young man celebrated his 38th birthday and his father prayed for him in a video that went viral for days. Since his father, Pastor Adeboye, publicly blessed him on the day he celebrated 38th, he has further gained more popularity all over the world.

Again, last week his popularity was put to test when he posted a photo of himself in face cap and that generated a lot of comments among Nigerians. One of those who condemned his mode of dressing is popular Evangelist Victor Edet, who said, ”I was shocked and shut of word’s after seeing this picture, how can a Pastor be wearing a face cap this way? God of mercy, what is the church turning into? Leke Adeboye should be cautioned seriously and he should be called to order. You can’t be a Pastor and be dressing like a gangster.”

Although, many Nigerians didn’t see it that way. One of those who supported him is popular OAP Daddy Freeze, as he sees nothing wrong of his dressing.

Pastor Leke Adeboye at 38 has achieved a lot for himself. He is a soldier for Christ that hears the hearbeat of God. Often called a teacher, counsellor and mentor. He is a clear voice on how to draw closer to God and understand one’s purpose. He is a exceptionally gifted to train and rally his passion, the youths and young adults. He is a member of The Redeemed Christian Church (RCCG) Worldwide, and The Youth and Young Adults Ministry Executive Board.

The youngest son of the General Overseer of The Redeemed Christian Church of God (RCCG), Leke Adeboye has a bachelor’s degree in Aerospace Engineering and a Masters In Engineering and a Masters in Engineering Project Management. He has previously worked for Accenture. He is an entrepreneur with several business establishments globally, such as AO3V, which touches millions through the production of The RCCG wristbands. He loves to break records and achieve positive change in all his endeavours. He was the youngest to ever attain the office of Assistant Pastor in RCCG in The United Kingdom.

His life goal and dream was to manage and develop his own aerospace corporation but The Lord had other plans. He was called into ministry, and is currently the Personal Assistant to The General Overseer of The Redeemed Christian Church of God Worldwide, Pastor E.A Adeboye. He is married to Mrs. Titilope Racheal Adeboye (nee Odesola) in 2011 at the RCCG Camp Ground. They are blessed with three kids.

(1) Leke Adeboye calls his wife his Manager, his CEO and his Account Manager.

(2) Leke Adeboye and Titilope met when she was in her third year in the University.

(3) Titilope Adebayo actually declined to marry him when he first proposed to her. According her to her, she didn’t want to be the cynosure of all eyes. She felt marrying Leke Adeboye would signify the end of living a simple and uncomplicated life.

(4) Leke Adeboye and his wife decided not to have sex until after marriage. According to the couple, they weren’t alone for too long, they talked more on the phone, sent a lot of text messages, went on dates in pulic places, watched movies in the cinema instead of his or her bedreeom.

(5) He was the youngest to ever attain the office of Assistant Pastor in RCCG in The United Kingdom.

(6) Leke Adeboye is the owner of Oasis Suya Eatery and Sharwama.

(7) He is also a Pastor at The Redeemed Christian Church of God.

During his formative years, his family was very modest and their home was at the RCCG Camp. By that time, much of the compound was not yet developed as the compound was just a very large expanse of land without access to electric power from the national grid and no active telephone service.

FORGET ANY RUMOUR ABOUT ME, MEET ME YOURSELF – Hon Rotimi Makinde