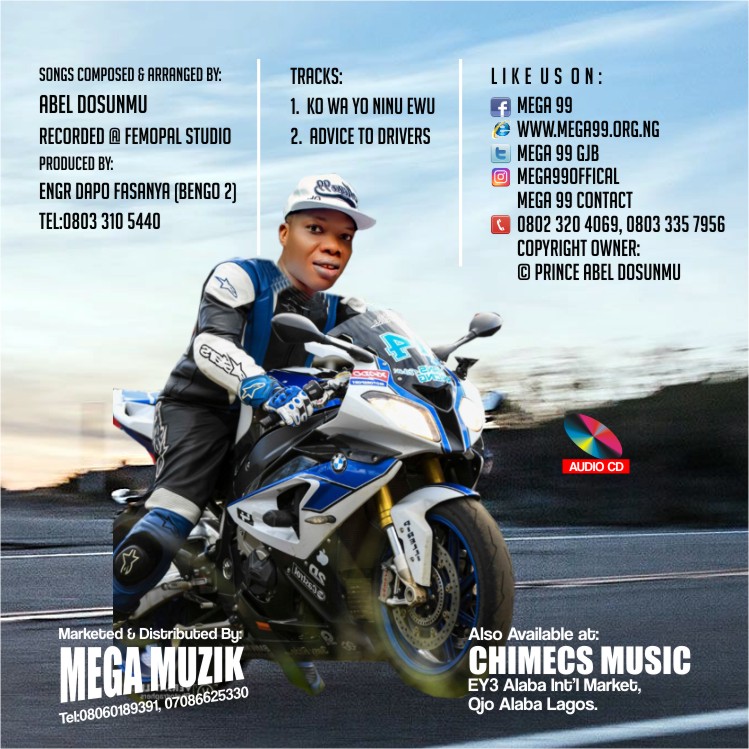 His real name is Abel Oluwafemi Dosunmu but many know him as Mega 99. He needs no introduction talk about the Juju music in Nigeria. He was born in Oshodi, Lagos State. Mega 99 obtained a Bachelor of (B.Sc) degree in accountancy from Olabisi Onabanjo University. In 1994, he established a musical group called Abel Dosunmu and the Mega 99 Band. His debut album titled My mother was released in 1998 and another album titled Prayer was released in 2000 but was famous for his album titled Money which was released in 2004. He later released”Ona Ara” in 2006 followed by “Weep Not” in 2008 and Thanksgiving in 2010. Another album titled Victory at last was released in2012, Fear Not” in 2013 and Emajo Emayo was released in 2014. City People’s Damilare Salami met with him recently in Lagos and they had a brief chat about his ‘fifth yearly supplication’ amongst several other topics. Below are excerpts from the chat, enjoy.

What inspired the album (Appreciation) that you released in 2018?

Well, thank you, we have been in the Juju music business for over a decade, we have been releasing albums and our fans have been enjoying us. We have garnered a huge fan page and we thought that it was about time we appreciated them for standing by us all through these years.

People already know that whatever comes from the stable of Mega 99 is always of high quality. It was as if they had been expecting it and it has enjoyed airplay; not that alone, we have also received a lot of feedback from our fans that they add value for their money. Our songs are always indelible and evergreen so whenever we release them, in fact, the one we released before appreciation, “Eda O LaroPin” is still selling fast.

Tell us more about the yearly supplication

This is the fifth one, each time we approach the end of the year, we always have songs of prayer for our fans and it is tagged yearly supplication. It is always a pure and undiluted gospel; we don’t sing anyone’s praise in this kind of song. We always make sure that it’s always a spiritual song that can draw people closer to God. You can use it to communicate to God and it always comes out towards the end of November or in the last month. This fifth edition is tagged Journey Mercy.

When should your fans be expecting this prayer supplication?

It’s already out. Although it should have been out earlier before now but we had some delay and because of the festive season. However, it’s now in market and available for sale.

You recently bagged some awards, can you talk about it?

2018 looked like a very good year having won so many awards, what are your plans forthe New Year 2019?

Yes, 2018 was a really good year but talking about 2019, I have the plan to shoot a good number of videos. Our musical videos are always time-consuming and very expensive; the reason is always ensure that we put in our best to ensure that we give our fans the best. So for the year 2019, our fans should expect Mega Superstar video.

You seem to be the only Juju artiste in recent times that shoots musical video, why did you decide to do that always?

The answer is so simple, that is why you see me winning so many awards. I always have my fans in mind; they are always encouraging me to go beyond my stretch limit to do more for them. Music is about hard work and my fans gave placed me at a level where I can’t afford to disappoint them so I have to keep thinking outside the box to continue to give them the very best. I can’t say because I have big shows every Saturday that I have arrived, no. There are some things I need to do to keep me relevant in the game publicise myself the more. So I can’t stop it.

There is this notion that Mega 99 is based in Ibadan and not Lagos, how true is that?

That is not true, I am Lagos based; though I always have shows at Ibadan and I often pass through Ibadan when I’m travelling. Sometimes my truck and instruments could be found in Ibadan for two or more days especially when I need to travel and branch there. It is true that we have a strong presence in Ibadan but Mega 99 is based in Lagos.

Apart from stage performances and album, what else does Mega 99 do?

We are involved in sales and lease of ultramodern musical instruments that can be used for political campaigns, at crusades, at rallies, in stadia etc. We can also set up sounds for studios, churches and other outfits that need such services. That is the other line of business Mega 99 does.