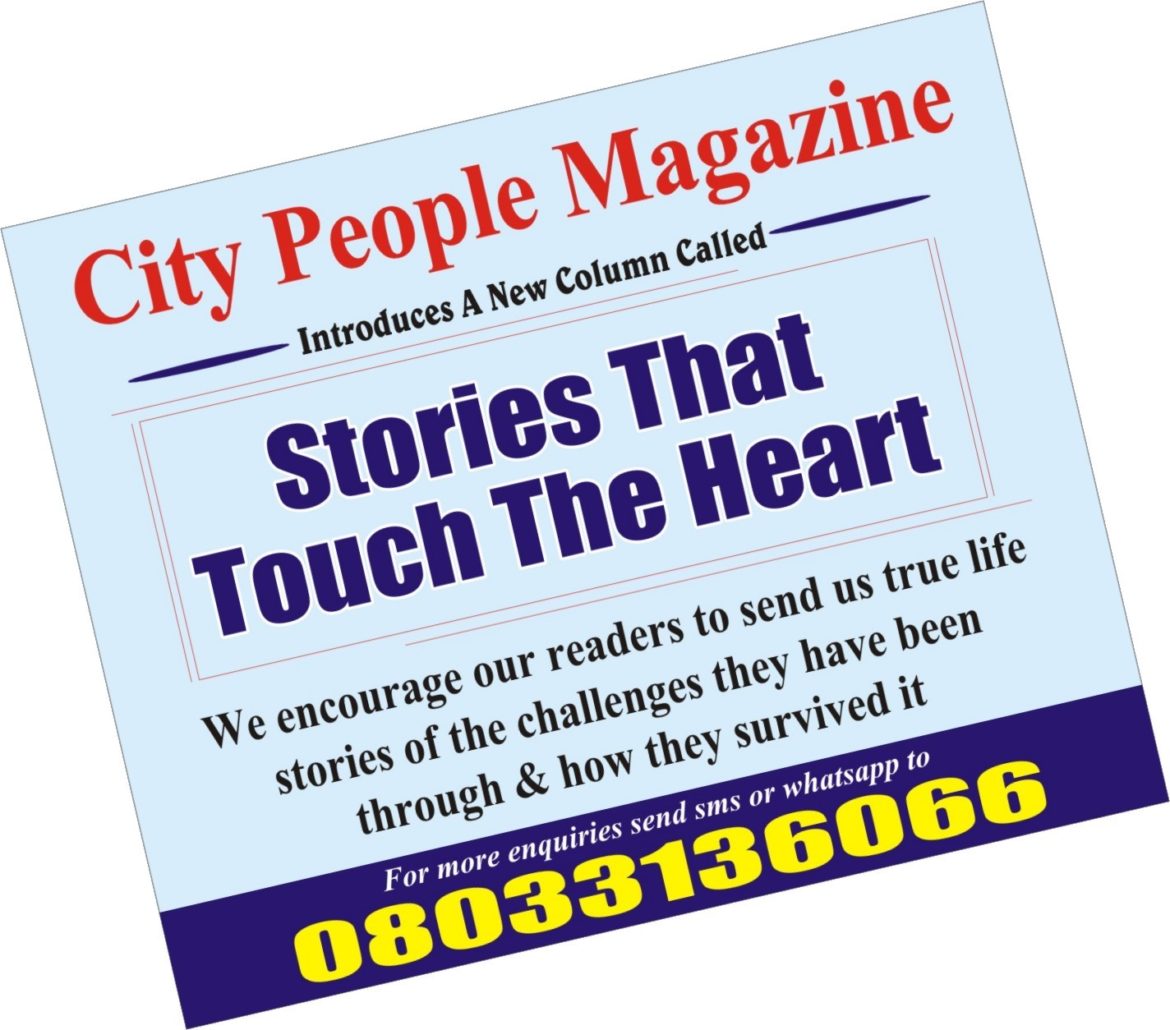 This is Part 2 of the story of how an innocent young girl’s dream of marriage became a nightmare as she ended up experiencing domestic violence. It is the 2nd edition of City People’s new column titled: Stories That Touch The Heart. It is a weekly column. If you have any true life story send it to us by whatsapp via 08033136066.

In April 2006, I started my petty trading with 100 pounds, buying designer cosmetics online and reselling to friends in church. I made enough money and diversified into clothing, mainly Ralph Lauren. I’ll buy online from America and sell in the UK. I included designer bags  which was very lucrative until I had to stop, due to some complaints about the authenticity of the bags. I lost some money because I had to refund my unsatisfied customers and at this point, I asked my husband for financial  help but he declined. I was upset because I had started without asking him for capital and the best he could do was help me at this difficult time, just to encourage me but he did not.

I lost a lot of customers but I was determined to go on. I refunded the ones I could and begged the ones I couldn’t for understanding. To God be the glory, I weathered that storm and saved again from my kids’ social entitlements and started wholesale clothing.

While I was doing my petty trading, my husband was getting ready for the 2007 elections so as expected he was in Nigeria campaigning, womanising  and spending money lavishly. The elections came and the results were just like the previous 2003 election. Another loss and that meant, I was even in more trouble because he will carry out his frustrations on me. In all of this our family members always answered our distress calls as best as they could.

In October 2007 the kids and I relocated to Nigeria as directed by my husband. I continued my petty trading, but having left for over five years, we needed real adjustment to our new system, especially the kids. They started school and I traded. My husband returned to his building for rent collection and life returned to, how it used to be, which meant going and coming in as he pleased. Me, on the other hand, I just concentrated on the kids and my business. Birthdays, Valentine day, Easter and other festive or memorable days except Ileya (the Muslim festival) came and went without notice Xmas was gifts and me cooking. He had rules and regulations which were to be followed strictly. I must not under any circumstance whatsoever be out of the house till 8pm. I cannot travel outside the country without taking the kids. I cannot have a shop. I must not attend any friend’s social event outside Lagos. I must always pick the kids myself from school. Attending occasions together will be strictly very rare etc.

The rules were followed with punishments of locking me out if I got home a minute after 8pm no matter the reason. I became extremely miserable. At this time also, he had insisted that we start sleeping in separate rooms. He, on the other hand was hardly at home. He travelled for weeks all over the country. He socialised as he pleased. He will leave home without notice of how long or where he was travelling to. Calling was at his discretion and my calling was often picked if he wasn’t busy or too tired to talk. The children & I got used to life without him. When he was home, it was constant arguments, fights and beating. He will return home about 3am in the morning, bang on the door. And I remember one such night, I opened the door and I got the dirtiest slap anyone could imagine for daring to send him an annoying Text message. I ran into my room and he followed me hitting, punching and kicking. My scream and shouts woke the children up and as usual, I begged and pacified, but he hit me even harder.

The next morning, he packed his stuff and travelled to Abuja without even caring how badly hurt I was. I pulled myself together and took some pain relievers and continued my usual routine of concentrating on the kids and my business. I called and begged for days for him to please come back home and eventually, he accepted my plea and came back home but on returning he sat me down and told  me that for about 5 or 6 years, precisely in 2003, a lady he met in Abeokuta gave birth to a baby girl  for him. To my amazement, I didn’t say a word. He asked if I heard him and I replied  Yes, it is ok. He stood up and left me sitting down, staring at his back.

In December 2008, I had become so heart hardened after he told me of the existence of his product of adultery, without any remorse) I stopped being emotional and I forgot sentiments. Infact, I stopped crying and feeling  self pity. I started facing the reality of my marriage. I just have to make it work and so I put in more effort. I became extremely understanding and tolerant. Girlfriends will send parcels to him and I would receive and sign for them. I’ll choose his clothes if he needed to attend an event. With this new strength, I focused on making my marriage work no matter what.

In August 2009, the kids & I went on our first summer holiday  to Dubai and London. And I guessed my good behaviour paid off. While on holiday, a friend told me that one of my husband’s girlfriends Lady T, had given birth to a set of twins a couple of years before and she had relocated to America. I told her I had  heard the story but I dismissed it. On our return to Nigeria I asked my husband and he explained to me how one of his ex-girlfriends, Lady T whom he dated for a very brief time had told people she was pregnant for him and given birth to twins only for him to go and ask Lady T’s mum and she denied the story. According to my husband, Lady T’s mum said her daughter  didn’t have twins for him. (subject to confirmation).

At this point, I completely lost my temper. I just couldn’t understand what else he wanted me to do. I was doing my best, putting in all the effort I could, emotionally, psychologically & physically yet he just carried on without any care about my feelings. I screamed, cried and begged for him to tell me why he was hurting me so much and making my life and our daughters’ lives miserable but he just sat there and kept on watching me like I was a crazy woman.

In JULY 2010, my husband cancelled our summer holiday, because according to him, if I hadn’t gone on holiday the previous year, I wouldn’t have heard anything about Lady T and the twins.  This infuriated me and another fight and round of violence began. I had to call his parents and my sister  at 3am when the beating stopped. They came in the morning and spoke to both of us.

In NOVEMBER 2010, 2 days to Ileya (the Muslim festival). I reminded my husband of his promise to allow me go on my first business trip to London in January 2011. I had told him of my intention to buy clothing items for my business, since he cancelled our summer trip. I had saved up money for my ticket and stock. I begged him to please give me his permission as my husband and he refused. I had called one of his aunties, Mummy T to please speak and plead with him on my behalf and  yet he still refused.

I became frustrated. Here’s a man who had a shopping plaza but didn’t allow me have a shop in his plaza or anywhere else, yet he tells people that he is not stopping me from doing my business. The same man that didn’t give me any Capital for the business I have grown from £100 pounds to over 8,000. I save up and still beg for permission and he still refuses. I told him all this and he got off his bed, pulled the cord off his TV and started whipping me with it. The kids ran out of the room, I screamed. He followed. I ran to the balcony. He caught up with me, pulled me by the legs and dragged me to the stairs, trying to push me down the marble stairs, he shouted “I HATE YOU” “I WILL KILL YOU” “I RESENT YOU” I married you. You didn’t marry me so you’ll do whatever I say as long as you want to be under my roof”. I struggled to get up and ran into my room, I locked the door but he broke the door.  He pulled off my lace wig and punched in the face. He then left. On his way, he saw my phone being charged, he pulled it off the socket and smashed it. The kids came into my room after he left and sat down with me on the rug, hugging and crying with me.

The next morning, after dropping the kids in school, I made a formal report to the Nigeria Police at Area F, GRA, Ikeja. I was given a hospital slip and a policemen was taken to the house with a Letter of Invitation to the station which he never honoured. I have the pictures of this episode of violence. For the first time in over 7 yrs I had the courage to act, but my sisters insisted I did wrong and went too far reporting him to the police. So,   I was taken back home to beg again.

My Ex-Husband Was Constantly Beating Me Black & Blue was last modified: September 15th, 2019 by City People

Ladies, Here’s A Quick Tutorial On How...

Here’s The Sex Doll That Is Driving...