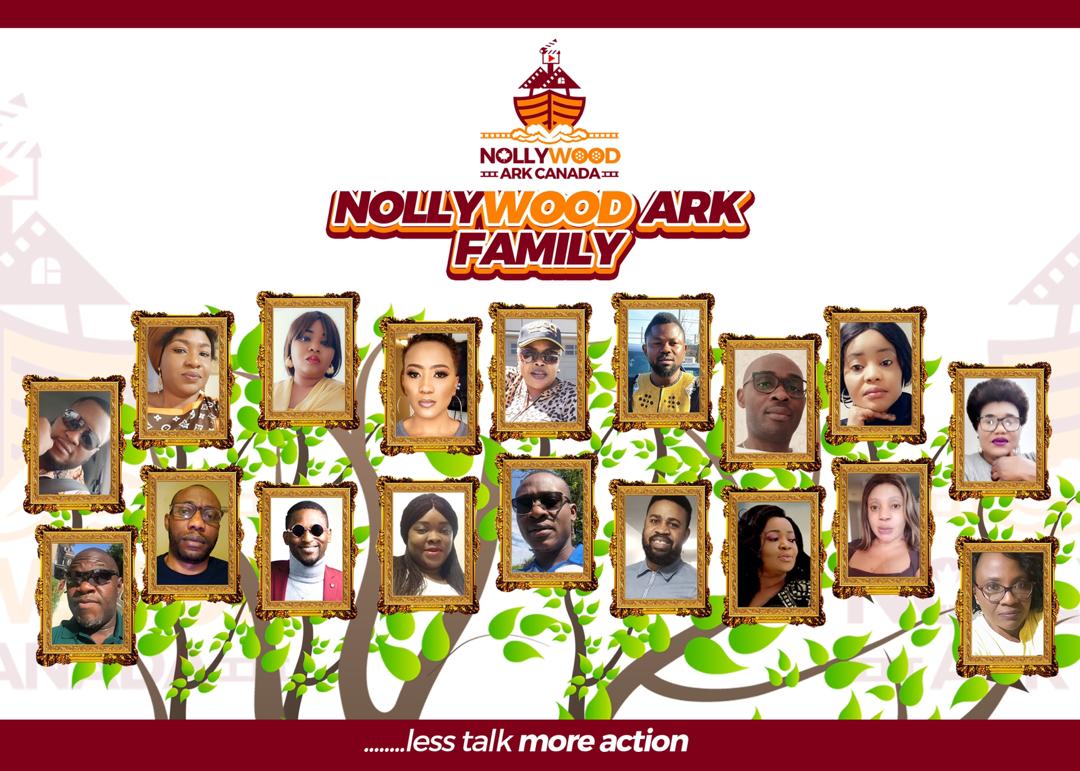 Meet The Members Of The Group Called Nollywood Ark CANADA

Nollywood Ark Canada comprises of exceptional and talented movie stars who have been in Nigeria’s movie industry and also featured in different movies. But after relocating to Canada, they still desire to produce and feature in movies. Even if they are far from home, they should still be able to function well in the industry and continue to exhibit their God-given talents and at the same time help up-and-coming-stars who have skills and talents but have not been opportune to feature in movies.

This group has produced over 4 movies from Canada and have also been producing skits and short dramas for fans to watch and enjoy.

The group is founded by star actress, Lola Alao, who joined the movie industry in the 90s through the English movie industry featuring in series such as Ripples Closet, Magnate, Super Stories and a host of others. She produced her first Yoruba movie Aye Male in 1992, directed by the renowned filmmaker, Chico Ejiro. Her role in Boyalemo by Laiban shot her to limelight and has since featured in over 300 movies. Many can’t help but always remember her role in the popular Wemimo Films, titled Ale Ariwo, which she played the lead role with star actor,  Funsho Adeolu (Mr handsome).

She relocated to Canada, a few years ago and has produced a few movies with different short plays which she shares with her fans on her IG page before the Covid-19 pandemic.

Adewale Adelani is the Vice President of the group. He joined the movie industry in 2003 after training under Prince Jide  Kosoko and he has featured in movies like Sindara, Surule, Jaiyeola Ibere Ati Opin, amongst others. To him, he strongly believes being a part of Nollywood Ark Canada would give him the avenue to grow and also teach the upcoming and aspiring actors what they need to know about acting. Temitope Ogutuga aka Emilia Andrew is not just an actress but a Television Personality, singer and dancer. She clearly finds a balance between business foresight, performance and character in herself and people she connects with. Emilia is popular in the 90s for featuring in different series. She was also spotted in a talent scout audition to play in a television sitcom Tinsel back in Nigeria before relocating to Canada. She has also featured in 2 movie productions in Canada titled Believe In You, by Tokunbo Jaboro and When Love Hurts by Isoken Ibike. She is also one of the castmates of the reality show Naija wives of Toronto.

Rachel Oyiza Ugorji joined the movie industry in 2018 and has since featured in few movies, besides acting, Oyiza is the CEO of Alfa fisheries and Richy poultry located in Lagos Nigeria. She is currently a caseworker in the Salvation Army Ontario and also the Assistant Treasurer of the group. Fadekemi Momoh is a household name in the movie industry in Nigeria. She shares a close resemblance with star actress Bimbo Oshin. She could pass for her sister any day. Before she relocated to Canada, she featured in a very good number of movies. She joined the movie industry in 2005 and presently she is the CEO of Anjysworld production. She is also a producer, presenter and event planner. Abolade Balogun is the Assistant Director of Motions and Pictures. He has been involved in the group’s productions and short movies shot in Dubai and Canada. Besides acting, he is a real Estate Consultant and Behavior Support Therapist.

Ayodele Abe is another talented actor, a graduate of Banking and Finance,  who has a strong passion for acting. Aderayo Isaac Laiye aka Iyalaje is the director of social and welfare for Nollywood Ark Canada, before relocating to Canada she trained under Alhaji Dan Kazeem in Ilorin, Kwara State and has featured in different movies.

Babatunde Akanji is an author and Movie Producer. He is popular for the book “Root of wisdom”.He is the CEO of Trowf foundation and has been a part of many movie productions in Canada. He is also one of the executives of the group.

Pretty Olanifesi Aribilola is from Ondo State, though she presently works as a personal support worker and Certified Event Designer in Canada and Nigeria but still creates time to feature in movies, a career she has a strong passion for. Rasheed Gbajamila is another talent in the industry. He learns industry business tips so he hopes to use the medium to exhibit his God-given talents and also help others interested in the Art to make their dreams a reality. Besides being a fantastic actor, he is also a successful musician. Abdulrazaq Aremu is an energetic actor who got inspired to join the industry watching veterans and icons such as Ishola Ogunsola, Oga Bello, Baba Wande and others. Adetutu Adedoyin, actress cum producer is a graduate of the University of Lagos. She joined the industry in 2001 after training under Yemi Amodu.

Bunmi Osun is from Ekiti State. She is one of the new faces that joined the group, though she works as a health worker but she still creates time for her acting career and has equally featured in movies produced by the group.

READ ALSO: THE STORY OF LAGOS 1ST LADY & HER ACTIVITIES IN 365 DAYS

The Story Of LAGOS 1st Lady & Her Activities In 365 Days

We Are Into The Business Of Managing...