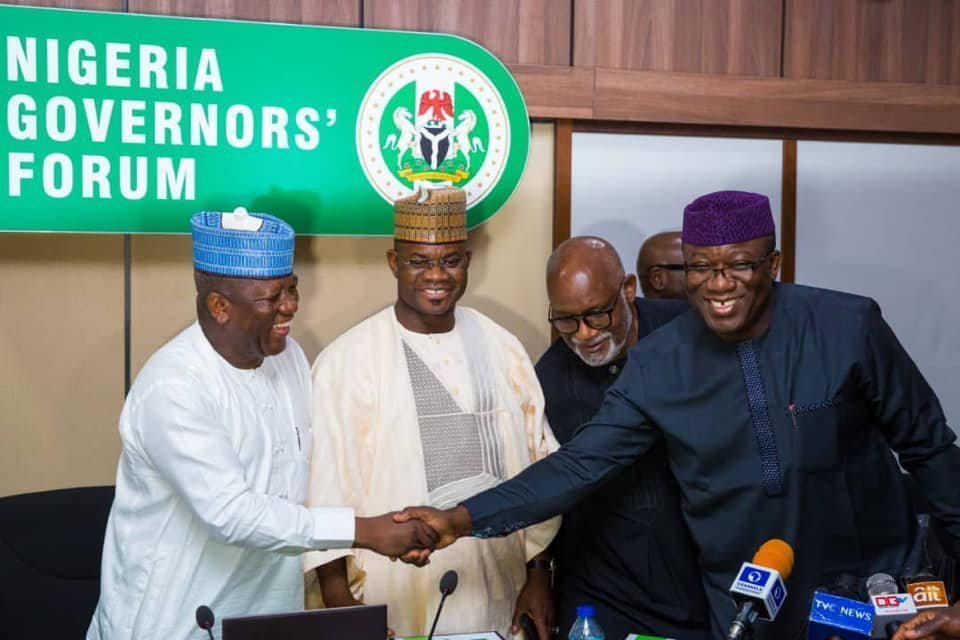 Governors of the 36 states under the Nigeria Governors’ Forum, will this week hold a meeting to further discuss economic issues as they affect the nation and their respective states.

The Head, Media, Public Affairs, Abdulrazaque Bello-Barkindo, who said this stated that the meeting was called to address how the effect of the crash in the price of crude oil as a result of coronavirus could be mitigated.

He added that they might take decisions on how they would run their budgets, especially with regards to payment of salaries, considering the crash in oil prices, which will lead to lower revenues or allocations from the Federal Government.

He stated that he would not comment further on the issue as he was not authorised to comment on matters that had not been discussed by the governors.

The Federal Government had cut the 2020 budget following a sharp drop in the oil price to $28 per barrel from the $57 budget benchmark, as coronavirus continues to impact the global oil price, fuelling concerns that the days ahead will be tough.

Bello-Barkindo said though the governors met on Wednesday, they would also meet this week given the prevailing health situation and economic challenges.

“For now, they are meeting next week, which is very unusual. They met this week ( last week) but they have decided to schedule another meeting this week. I think it is to respond to various strange circumstances that have befallen the country. When they meet this week, we will have a definite answer on that.”

The NGF Chairman, Dr Kayode Fayemi, had said the NGF during its last meeting, constituted a sub-committee headed by the Governor of Kaduna State, Mallam Nasir El-Rufai, to comprehensively review the trend and advise state governors on the set of actions required to address challenges in the economy.

Members of the committee include the governors of Kebbi, Ebonyi, Ogun, Nassarawa, Edo and Jigawa states.

Fayemi had said the committee was set up following an extensive discussion of the impact of the COVID 19 pandemic and falling oil prices in the Nigerian economy and the revenues of the states.

Efforts by our correspondent to get the response of the Director-General, Peoples Democratic Party Governors’ Forum, Mr CID Maduabum, proved abortive as he did not pick his calls.

Meanwhile, Ondo State Government has said it will decide on the budget review after the cut of the national budget by the Federal Government.

The state Commissioner for Information, Mr Donald Ojogo, however, said the six governors of the region would soon meet on the budget review but said it was too early for the six-state governments to embark on such activity at the present time.