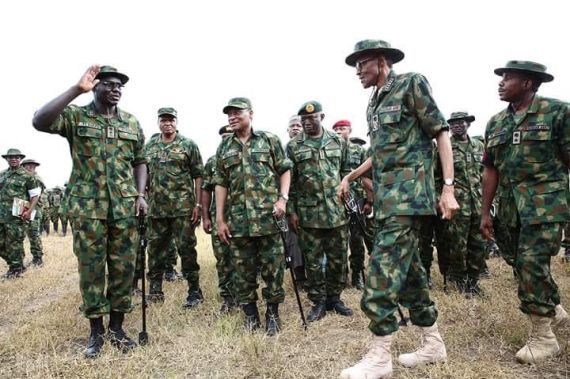 The 3 Brigade Nigerian Army has commenced a free medical outreach at Burji village, Doguwa Local Government Area of Kano State, aimed at supporting residents of various communities in the area.

The Commandant of the Brigade, Brig-Gen. Bamidele Alli-Alabi, said the gesture, which is part of the military’s social responsibilities to their host communities, was instructed by the Chief of Army Staff, Gen. Tukur Buratai.

According to him, the exercise, tagged ‘Egwu Eke lll’ (Operation Python Dance lll) was also part of the Army’s activities to prepare their men to ensure a hitch free 2019 general elections in the country.

“As you know, we are doing everything possible to end any form of criminality in our communities, especially the issue of terrorism, kidnapping, cattle rustling, armed robbery and other criminal activities.

He said that the exercise, which would last through March, would be extended to all the local government areas in Kano and Jigawa States.

While calling on the people to come out and benefit from the gesture, Alli-Alabi further solicited for useful information that would help the army in discharging their duties in the area.

The District Head of Doguwa, Alhaji Aliyu Harazimi, commended the army for the gesture, adding that it came at a time when people of the area needed such assistance.

The traditional ruler also lauded the army for ensuring peace in the area, noting that residents always feel secured due to their presence in Falgore forest and other trouble areas.

“Since the deployment of military in this area, we have recorded so much reduction of criminal activities in our communities, especially the cases of kidnapping, armed robbery and other crimes.

“Their presence also contribute towards the success of the Presidential and National Assembly elections, and we are hoping that the Governorship and House of Assembly elections will also be the same,” he said.

He therefore called on the people of the area to come out en-masse to exercise their civic right by voting for the candidates of their choice.

But Harazimi warned them against any form of gathering in the name of celebrations for victory, adding that the state government has banned such.

According to him, severe sanction awaits anyone caught breaking the law.