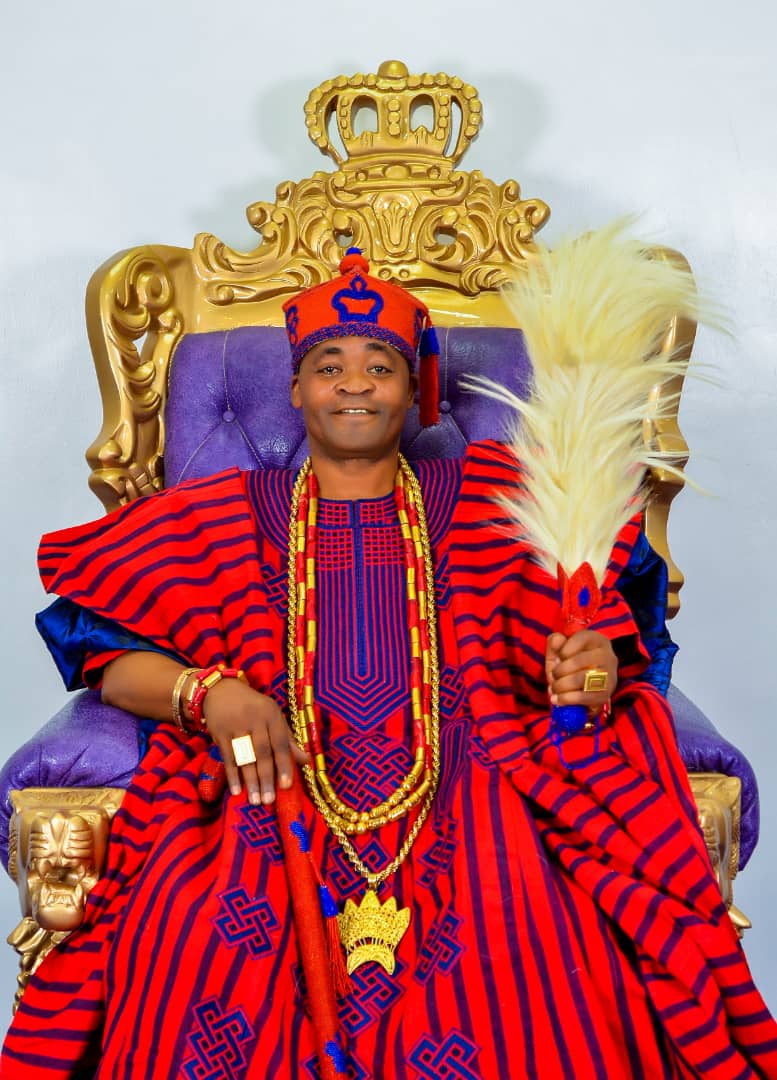 The sleepy town of Itori town bubbled with excitement for one week,  right from 29th of March, 7th of April as Oba Abdulfatai Akorede Akamo, the Olu Itori celebrated 15years on the throne, in grand style. The 2-in-1 event took place at the spacious King’s Court, Itori Town Hall, and paraded many top government officials, monarchs, to mention a few. City People’s Assistant Society Editor, ABIOLA ORISILE, was there to serve you the gist from the gold-and-purple Royal event.

Right from the moment you drive through the filling station that heralds your arrival into Itori town, a big banner spotting the photograph of Olu‘-Itori was conspicuous for all to see. The banner was evidence and an assurance that the guests who were coming to share in the joy of Olu-Itori and his new chiefs were in for a great time. All roads leading into the town were thronged with exotic and expensive automobiles. The event also boosted economic activities of the town while it lasted. Olu-Itori, Oba Abdul Fatai Akamo, was overwhelmed over the level of development he has brought to the town. He beamed with joy as he majestically welcomed his guests.

Have you been told that Oba Abdul Fatai Akorede Akamo will henceforth be addressed as “Oba (Dr.) Abdulfatai Akorede Akamo”? Well, let’s put it on record that Oba Abdulfatai Akorede Akamo has been conferred with a  doctorate degree by the University of Lagos, one of Nigeria’s most prestigious institutions of learning. It was the same day the University of Lagos also conferred honorary degrees on some prominent Nigerians in Lagos. Unilag’s representative was present to dress up the respected king in the academic gown.

INSIDE THE NEW KINGS COURT WHERE THE EVENT WAS HELD

As you drive into Itoriland, you will notice a big event centre on the right which could seat over 1,000 guests at once. Well, that is “King’s Courts”, the new events, centre newly built by Oba Abdulfatai Akorede Akamo. Right from the gate, the edifice which must have gulped many millions of Naira is an architectural piece. Walking straight into the hall, the first thing that will catch visitor’s attention is the giant Kabiyesi statue which hung beautifully on the ceiling. It illuminated and beautified the entire hall. The 5,000-setter hall was decorated with unusual Safari chairs and tables which also added glamour to the event.

One celebrity wife, who left huge fashion minds of many of the guests was Olori Barakat Akamo. The pretty wife of Oba Fatai Akamo Akorede was conspicuous throughout the event. She made her first appearance at few minutes past 1 pm in a unique Berge hand-cut embellished Aso-Oke made by Ogun number one Aso-oke weaver, “Newlookconcept”, Hajia Mariam Abolanle. She complimented it with her 18carat gold necklace which sat beautifully on her neck. Her huge 18carat gold bangle and 2 sets of rings were also points of attractions. Her second turnout was in Majenta lace which was thrilled with unique shoes and bags. Olori Olabisi Akamo was seen moving from table to table to check on her large guests throughout the event. She made sure they were adequately taken care of.

His Royal Majesty, Oba Lamidi Olayiwola Adeyemi, the 80years old Alaafin of Oyoland, was an early caller. He walked in a few minutes past 1pm and all eyes were on him as he walked in in his full royal regalia, looking younger than his age. He was ushered in by Olu-Itoriland, Oba Abdulfatai Akamo, himself as guests present gave the Alaafina royal welcome. As soon as Alaafin walked in, the event was declared open. There is, no doubt, that Oba Lamidi Adeyemi and Olu-Itori share a father-son relationship. He spent a few hours and left after he has blessed the new Babalaje and Iyalaje of Itoriland, AlhajI Kazeem Odeyeyiwa and  Alhaja Mutiat Odeyeyiwa.

Just while many of guests were busy admiring the Alaafin of Oyo, Oba Lamidi Adeyemi, the arrival of another prominent Ogun king, Oba Michael Aremu Gbadebo, the Alake of Egbaland, was announced. He walked in hand in hand with his darling wife, Olori Tokunbo Gbadebo and his chiefs. Don’t forget that Olu-Itori is one of the Obas under the tutelage of  Alake of Egbaland and they share a very strong bond. That was why Oba Gbadebo didn’t leave even after Alaafin of Oyo had left. He was one of those who gave the royal blessings to the new chiefs after they were installed.

A few minutes past 5 pm, the hall witnessed the royal grand entry of His Imperial Majesty, the Ooni of Ife, Oba Adeyeye Enitan Ogunwusi, Ojaja the first. Many guests who hadn’t seen the royal entourage of Oonirinsa before watched with awe and were impressed to appreciate African culture the more. Town criers kept chanting, praising the Oonirinsa to the admiration of all, while Oonirisa waved to the crowd. He was at the event with Deputy Customs comptroller, Prince Kayode and his wife, Toyin Kolade. They were later joined by Prophetess Olubori and Teekay Fashion’s boss. Ooni spent many hours gisting with Oba Ademola Elegushi, Oba Dosumu and Olori Aramide Elegushi.

Ogun’s biggest cement dealer, Alhaji Kazeem Odeyeyiwa, is the new Babalaje of Itoriland. The Ogun businessman, who is the number 1 Dangote Cement dealer and Number 3 Lafarge cement dealer in Ogun state was honoured with a new title because of his business acumen and achievement. His beautiful wife, Alhaja Mutiat Odeyeyiwa, also became the Iyalaje of Itoriland. The celebrity couple was a cynosure of all eyes when they stepped out, looking gorgeous in a luxury Aso-oke by Newlookconcept for the chieftaincy. They made heads turned a few minutes past 4 pm when Alhaji Kazeem spotted 1million-stone luxury lace rocked by rich celebs, while his wife rocked an exclusive HOH lace bought from ‘Al-fatia “Fabrics. Many guests couldn’t take their eyes off her 18carat gold embellished with white stones. It was exclusively designed for her by a popular jeweller. It complemented her brown Italia Saco shoes and purse.

In case you haven’t been told, Lagos celeb babe, Abisola Munis, is the new Yeye Oge of Itoriland. She was one of the newly installed chiefs of Olu-Itori. She was a cynosure of all eyes when she stepped out in a white HKG luxury lace matched with a royal silver mix with coral beads. Her second appearance was in yellow HOH lace from Kubis Fabrics, which matched with her 18carat gold.  Many of her guests admired her as she walked to the podium with confidence.

Chief Kofoworola Adebutu, the Otun Yeye Oge of Lagos and wife of Premier Lotto boss, Chief Kesington Adebutu, was one of those who honoured Yeye Oge Bisola Munis. She was not just an early caller, she came in with a large number of guests to show love to her. Abisola Munis is one of the closest friends to Abisola Telbitel, the younger sister of Yeye Oge  Adebutu. So also is Dr Afolasade Okoya, the wife of a  Lagos billionaire, Chief Rasak Akanni Okoya. She didn’t only send her prayer, she also sent Eleganza coolers to be shared to guests.

Aliko Dangote, Africa’s richest man, was also represented by Chief D.V.G Edwin, the Bobaselu of Itoriland. He was the one who read and also delivered his goodwill messages to a large number of guests.

Governor Ibikunle Amosun, the   Governor of Ogun state, was also ably represented. He sent his beautiful wife to represent him at the event.

On Saturday 7th of April, Oba Ademola Elegushi and his best friend partied at Olu-Itori’s 15 anniversary. Though they are both known to have partied together many times before now but they sent tongues wagging once again when Olori Aramide partied with them. Many who alleged that Elegushi was the cause of the fight between the two friends were stunned seeing how Oba Dosumu and Olori Aramide chatted way. The trio was seen together throughout the event.

HOW K1 MADE MANY DANCE FOR HOURS

Give it to the king of Fuji himself, King of Fuji Wasiu Ayinde Marshal, he made many guests dance for hours at the event. He dished out hot songs that kept many guests on the dance floor for hours.