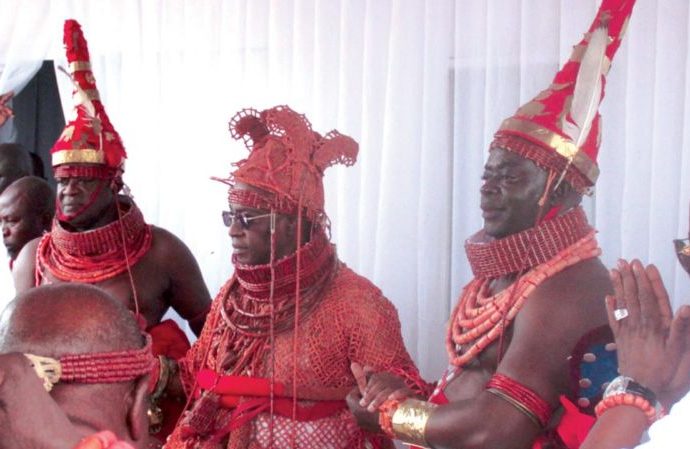 On November 25, the Oba of Benin, Oba Ewuare II, Ogigigan, visited the Sultan of Sokoto, Alhaji Sa’ad Abubakar IV in his palace in Sokoto, a palace built in 1804.

It was a reciprocal visit for the Sultan had visited Benin on August 13, 2016 and was present at the coronation of the Oba of Benin in October last year. The bond between the Benin Empire and the Sokoto empire became stronger when Colonel Samuel Ogbemudia,the Military Governor of Bendel state at that time established the University of Benin in 1970 and made the Father of the Present Sultan, His Eminence Sir SadiqAbubakar III(1903-1988) the Chancellor of the University.

Since then Sokoto and Benin had been on friendly terms Suffice it to note that, in the 16th, 17th and 18th centuries, the four giant empires that existed in the territory we now refer to as Nigeria were Oyo, Sokoto, El-kanemi and Benin empires. It is hoped that the Oba of Benin will soon visit Maiduguri and Oyo on or before October 15 next year when the Alaafin of Oyo, Oba Lamidi Olayiwola Adeyemi, Iku babayeye celebrates his 80th birthday.

In the past we were told that the Oba of Benin does not sleep outside his empire but things have changed and we are in modern times. The history of the four empires always excites me and it shows how organized we were in the past. We keep on deceiving ourselves by not giving any role to traditional rulers in our present constitution. They are our heritage. Let’s take a look at the history of the Benin Empire.

As taught in the history and specifically as written by Mr. K.B.C. Onwubiko, “Benin Empire was of the great forest states of West Africa remarkable for its size and well-developed political institutions. Beginning as a little city-state on the Benin River, the kingdom had risen to an extensive empire embracing many tribes.

At the peak of its power in the 17th century, the Benin empire stretched from Lagos to the Niger and from Idah in the north to the coast. By the beginning of the 18th century however, decline began to overtake the empire. The chief causes of this decline—the incessant civil wars precipitated by disputes over succession to the throne; the adverse effects of the slave trade on the economy and population of the state; and the rise of the Oyo Empire with its effects on Benin trade—have been noted. In consequence of this decline, many provinces of the empire broke off and became independent.

At the opening of the 19th century therefore, the great empire had shrunk to the original Benin Kingdom which was roughly coterminous with the present-day Edo and Delta States. It embraced only Edo-speaking peoples—the Bini, the Ishan and the Afenmai. Benin City remained the seat of the Oba and the metropolis of the kingdom. Yet, in spite of the decline of the Benin Empire the Benin kingdom as distinct from the empire was far from decadent. Indeed, Benin still remained a powerful state and exercised some measure of influence over Lagos, the Itsekiri, the Urhobo and parts of the Western Ibo area, and in Osemwede’s reign reconsolidated its control over the Ekiti Yoruba. “Moreover, the decline of the empire did not bring about internal political collapse of the kingdom. The monarchy which was the strength of the Benin political system was still as powerful as before.

The Oba still ruled the kingdom with the assistance of the State Council of title-holders which was always consulted on important state matters. These tittle-holders drawn from the nobility comprised the three orders of state officials—the Usama Chiefs, the Palace Chiefs and the Town Chiefs. Some of the title-holders held important state offices such as those of the Iyashere(Prime Minster), the Ebohon(Minister of External Affairs) and the Ologbosere (Commander-in-Chief of the Army).

“The Oba of Benin wielded greater political power over the council of State like the Alaafin of Oyo did over the Oyomesi. The Oba’s great strength derived from his semi-divine status as a representative of the gods and the ancestors. His ability to manipulate the system of Palace and Town offices and to take advantage of succession disputes to state offices or titles, and his control of the economic resources of the state through the activities of the Iwobo Palace society and he craft guilds.

Thus, for instance, he could make appointments to vacant titles, create new ones or transfer individuals from one order to another. In these ways he was able to maintain a balance between competing groups and individuals, and so prevent any one group or person from acquiring too much power. Above all there was no provision for ritual regicide as there was in Oyo. Yet, the Oba was not an absolute monarch.”He had to operate within the framework of conventions sanctioned by tradition and sanctified by ritual.” It was this strength and vitality of the monarchy that was responsible for the survival of the Benin kingdom long after the empire had disappeared.

The area of effective Benin authority in the 19th century was mainly limited to Benin itself, Ishan and Afenmai, the last two being provincial states. Each was under a local governor called ‘Enogie’ which title was conferred by the Oba. Each Enogie had a representative or patron among the title-holders at the Oba’s court. The internal politics of Benin did not differ much from that of the past centuries. There were the usual civil wars attendant upon disputes over succession to the throne whenever an Oba died, followed by periods of tranquility and progress when a strong Oba was on the throne. Obanosa succeeded as Oba in 1804 after a civil war which followed his father’s death.  After his death in 1816, the struggle for succession between his two sons plunged the state into another civil war. In the end, one of them——Osemwede succeeded and reigned till 1848.

Osemwade was a popular and ambitious Oba who tried to recreate the Benin Empire by his military campaign against the Yorubas of Akure and Ekiti who were made to pay tribute to him. But civil war which began again on the succession of Oba Adolo in 1848 ruined Osemwede’s achievement as Ibadan seized the opportunity of the turmoil in Benin to extend its power over Ilesha and Ekiti. However, Adolo eventually gained control, and during the greater part of his long reign(1848-1888) Benin experienced a period of commercial prosperity.

“Ovoramwen or Overami his successor was the last Oba of an independent Benin State. He ascended the throne in 1888 at a time when the British were seriously engaged in the struggle for the acquisition of territories in the Bights of Benin and Biafra. In 1891, Britain had declared a ‘protectorate’ over the Oil Rivers. Lagos had become a British Colony since 1861. In further pursuance of this policy, Gallwey, Vice-Consul for the Benin River district visited Oba Ovonramen in 1892 and persuaded him to sign a treaty placing his kingdom under British protection and promising to abolish slavery and human sacrifice.

The Oba was however suspicious of the British, and seeing the fate of the Itsekiri Chief Nana, closed his kingdom to foreign traders in 1895. Following this, the Acting Consul-General Phillips decided to visit Benin to press the Oba to adhere to the treaty. Early in 1897 Phillips proceeded to Benin with a British party of 8 and 200 escorts and carriers. He was warned to postpone his visit for that was the time of the Ague festival when the Oba was forbidden to see a foreigner but he paid no heed.

The party was in consequence ambushed on its way to Benin City and Phillips and five of the British party were killed together with a good number of escorts. The result of the incident was a punitive expedition of 1,500 strong against Benin. The city was captured and burnt down and its famous bronze plagues and other ornaments looted by the British invaders. Six months after, the Oba surrendered himself , was tried in September 1897, convicted and deported to Calabar where he died in 1914. Thus came to an end the sovereignty of the great kingdom of Benin. But the dynasty of the Obas had continued to this day.”

ERIC TENIOLA, A FORMER DIRECTOR AT THE PRESIDENCY, STAYS IN LAGOS.

How Asiwaju TINUBU Made Me Go Into Politics -Desmond Elliot