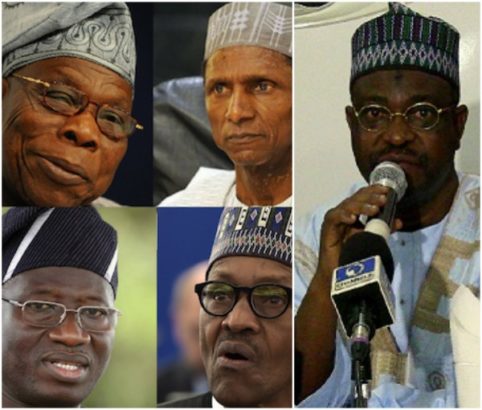 Speaking at 2016/2017 Matriculation and Fellowship Endowment ceremony of National Institute for Legislative Studies, NILS, in Abuja this weekend, former Speaker of Nigeria’s House of Representatives, Ghali Umar Na’Abba, slammed Presidents Nigeria has had since 1999 till date,  describing them as accidental leaders.

According to Na’Abba who called for regular ‘tutorials’ for political leaders at all levels, imploring more Nigerians to participate in politics to open up the political space, Nigerian leaders’ error in governance, has been the problem of Nigeria since 1999.

“Circumstances at hand or situations on ground have, to a large extent, over determined who and who was elected into office in Nigeria as President since 1999, against level of preparedness on the part of the leaders in terms of clear vision and programmes obtainable in most democracies of the world, culminating in accidental leadership for the country’.

‘I believe that not just the legislature, but every arm of government serving the purpose of governance, must invest in exposing democracy to the people. “It is a sad commentary on our political life that today, recruitment into leadership has been subverted by a few politicians because they deny Nigerians opportunity to contest elections and achieve their aspirations through the systematic appropriation of political parties to themselves. These politicians have stopped the growth of democracy.